Editor’s Note: With the start of the London Olympics just around the corner, Transpositions interviewed Steve Scott about Run with the Fire, an arts initiative inspired by the spirit of the Olympics. Designed to exhibit in churches, Run with the Fire is an interesting synergistic example of what happens when art, culture, and the church come together. Images appear by permission of Run with the Fire. 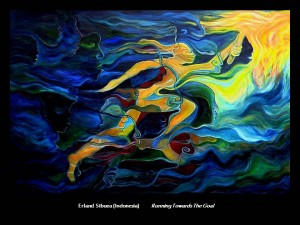 1. Please describe the Run with the Fire project and what inspired its creation.
Run with the Fire is a travelling exhibition of 25 artists from different parts of the world. The artworks are inspired by the idea of the travel of ideas and concepts. All the art and images are on DVD, meaning local churches, communities and other groups can install the ‘virtual’ exhibition, while building an exhibition of local and regional artists along side it or around it.

For me, the idea for Run with the Fire started during our CANA (Christian Artists Networking Association) conference in Bali in 2005. We had just had an exhibition of international art to promote peace in the wake of a recent terrorist bombing. Also one of our conference participants had recently exhibited a large public sculpture made from recycled weapons in Washington DC. I wanted to take a ‘peaceful’ exhibit of images like that in digital form to the Beijing Olympics in 2008. I hit a dead end, so I began to think about the London Olympics in 2012. I contacted two UK organizations, commission4mission and Veritasse – firstly, to see what people were already planning and,secondly, to see if we could partner together in putting together an art show that pulled in international elements and digital media, as well as local artists in various places. We called the proposed event ‘Run with the Fire’, both to tie in with the Olympic theme and also to refer to the spark and flame of inspiration associated with Pentecost.

Both Pentecost and the Olympics involve the ‘flame’ image in creative and multicultural ways. For the former, it was the birth of the church; for the latter, the dream of cultural exchange via international games. We were inspired by this idea of transfer as well as the idea of multicultural celebration. In one case, a runner passes a baton to another or carries the flame. In our project, the artist passes on an inspiration and another executes it. These ideas of transfer, relay, passing it on, and celebration informed everything from the way our organizations worked together to what got `passed on’ to different artists and to what is now happening with our show in different places. 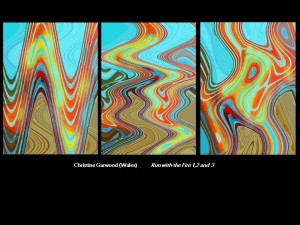 2. What were the reasons for getting Run with the Fire started?
We wanted to find ways of connecting art, faith and the public. We wanted to create an open-ended art project that would take advantage of enhanced means of distribution while providing a place that honors local creative expression. I was inspired by what I had seen in Bali; commission4mission and Veritasse had built good working relationships with churches and artists in UK and Europe. I think we were all excited by the potential an exhibition format like this has. One of the ways of getting over the hassle of transporting physical art to different places was to take advantage of the new forms of digital technology and networking, such as using good quality images burned to disc. When we combine this with an opportunity for local or regional response in the form of an accompanying exhibit of artwork, we are building bridges between cultures using the latest technology and creating space for local artistic response.

This approach reminds me of the Old Testament prophets speaking about ‘the nations’ bringing their worship to ‘The mountain of the Lord’ [1] as well as the author of Revelation talking about ‘The Kings of the Earth’ bringing their best offerings to God.  [2] The church can provide a foretaste of this future glory. When Paul writes to the Church at Ephesus, he prays they would learn about the many dimensions of the love and wisdom of God. This learning unfolds ‘together, with all the saints’;[3] this cross-cultural creativity was intended as part of the normal life of a growing church. As the Church then and now is ‘in mission’, an international arts exhibit exploiting the latest digital networking technology in concert with a variety of local and regional responses seemed to be a good way of exploring the missional ‘window of opportunity’ opened up by the Olympic games in London. An exhibit like this not only opens the door for mission but also represents, via the arts and cultural diversity, something of the expressive and learning life of a healthy church. 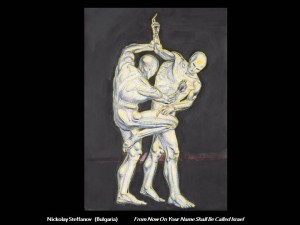 3. I’m intrigued by this collaborative ‘relay’ aspect of the project, ‘with ideas being passed from one artist to the next.’ How did this work in practice? In what ways did this impact or change the way in which the artists worked and the art they produced?
Artists came up with ‘Fire’ inspired words, statements or Biblical passages and then other artists used these as a seed of inspiration for their own work. When I look at the different images included in the DVD exhibit, I see some artwork where the imagery connects quite obviously to one of the inspired words or to our overall theme. In other cases, the work looks quite abstract and seems to be a distant variation on the theme or idea. It’s as if the art maker took the idea and ‘ran with it’ or in some cases took a big jump with it! I think the collaborative aspect worked wonderfully in practice. As I read some of the ‘seed’ statements written by the artists and look at the artistic responses, I am amazed at some of the leaps these creative people made. 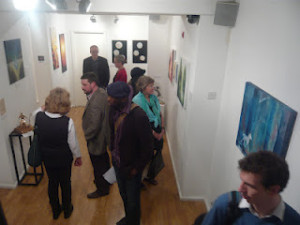 4. The ‘relay’ idea seems to continue by making the project available as an exhibition for churches to put on. Are there any ways in which churches have creatively built on the work that was created for Run with the Fire?
We are just now getting in stories of how this project is being put to use in different situations. When it was on display at the Strand Gallery in central London at the end of May, it was installed as an exhibit with projected images as well as artwork on the walls. However, I recently heard of how the DVD was put to use by one church as part of a larger celebration of the Queen’s Diamond Jubilee. I also heard of an all day event called the Colours of Life put on by the diocese of Leicester, a huge celebratory event attended by 1,500 people featuring a variety of local and national Christian expressions. Run with the Fire was included. There is going to be an interactive art event in Streatham, south London in early July, and I understand there is an arts group in Plymouth planning something involving a number of organizations in that area. Some of the organizations/organizers are building creative variations upon the Run with the Fire idea in the same way as different artists came up with variations in their approaches to the different ideas ‘relayed’ to them.

Steve Scott (director of CANA) completed art school in the UK in the mid 1970s and then moved to the USA. In addtion to lecturing and performing widely, Steve has released ten albums of music, four volumes of poetry and two books of art essays.