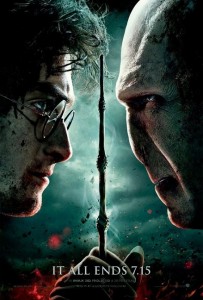 There is one thing that is absolutely clear about Harry Potter and the Deathly Hallows, Part 2: it was made for the fans. If you are not familiar with the Harry Potter series in anything but the vaguest terms, this movie will make almost no sense to you. If you are a fan, the film is a satisfying adaptation – faithful almost to the point of fault, and with only a few artistic liberties taken.

The film picks up precisely where Part 1 left off, with the death of the house-elf Dobby and the evil Lord Voldemort breaking into Albus Dumbledore’s tomb in order to steal the Elder Wand. Harry, Ron and Hermione, finally all back together and stronger than ever in their friendship, are continuing their search for the Horcruxes, though that action takes a back seat to the epic battle of Hogwart. This battle is, almost unbelievably, better on screen than on the page – there were a few points when this reviewer caught herself with a slack jaw and mouth hanging open in the theater. There are little bits of exposition as we go along, but the movie moves so quickly that one literally cannot miss a sentence.

There are very few surprises for those familiar with the books, but the movie is not so predictable as to be boring. Each of the main actors puts forth a great performance, and audience members should probably bring tissues for some of the death scenes (and boy are there death scenes!).

The only part that will frustrates many fans – especially those who enjoy the Christ figure that Harry becomes at the end – is the changing of one of Albus Dumbledore’s lines in such a way that it shifts meaning entirely. Instead of “Help comes at Hogwarts to those who need it,” Dumbledore suggests that help comes to those who “deserve it.” I can understand this from a film perspective – one wants to affirm that Harry is deserving and is truly the hero, but the story in the book is far messier than that. Harry does things that, in a perfect world, would mean that he would not merit help – he uses the Unforgiveable curses, he quite often treats his friends terribly, and he is quite selfish and poorly behaved a good part of the time. Rather than being an “above it all” hero, as the movies tend to make him, the Harry of the books reads much more like a real person stuck in extraordinary circumstances, rather than an extraordinary person just being awesome.

The shift in Dumbledore’s lines confirm for me what I have thought for a number of years now – the movies are completely different works than the books and should be taken as such. While Rowling did have some direction with the script and, most of the time, signed off on the changes, it is clear that the directors and script writers decided to shift perspective slightly to make the message more friendly to the movie-going masses. Rather than the hard tension between Harry’s destiny and his choices, Movie-Dumbledore makes Harry’s victory all but an inevitability – Harry is a good guy, therefore he deserves to win in this great battle between good and evil.

Ultimately, this shift is unsatisfying. We don’t necessarily cheer for Harry because he is a good person and therefore deserves to win, but we cheer for him because he is a broken person who had every chance to go the way of Voldemort, but rose above his circumstances and chose love over power.

While the movie is satisfactory – great, even – it is still missing the message of a messy gospel sent for those who don’t deserve it. The movie eschews an imperfect Christ figure in favor of a nice, clean theology that draws a line in the sand between good and evil. So while the movie provides closure and much needed catharsis and mourning time for beloved characters, the final message rings hollow in comparison with the unresolved tension and messiness of the series. Rowling’s magical world, in book form, is ultimately much more realistic that David Yates’ film vision.