Editor’s Note: As part of our monthly focus on the TheoArtistry project and its collaboration with Sir James MacMillan, we offer another insightful article that examines one of his pieces.

Waiting. Anticipation. Our society is not skilled at either. Patience is a virtue that we generally lack, especially with the steady flow of innovations regularizing the instantaneous. We want resolution – heaven on earth, and we find ourselves frustrated. In Romans 8, Paul writes of waiting ‘patiently’ for the final glory, when at last creation is free from the frustrations and pains of earth. It is ‘something we hope for’ but do not yet have. [1]

In his setting of Psalm 96, ‘A New Song,’ James MacMillan provides a soundtrack for the unresolved and incomplete Christian life. In his own words, MacMillan’s compositions emphasize the ‘interaction’ of the ‘joys and tragedies of ordinary everyday people…[with] some concept of the Beyond…something that we stretch towards…’ [2] Within this philosophy, MacMillan reimagines the familiar refrain ‘sing unto the Lord a new song’ as a song of waiting, silence, and incompletion rather than the traditional praise to a victorious God. This new vision more accurately reflects life on earth, but does not despair of the promise of completion at that time when ‘all the whole earth’ unites in praise. He anticipates it.

MacMillan notably sets to music only verses 1, 2, and 13, focusing not on God’s earthly victories, but on the promise of his resolution in the world to come. ‘A New Song’ was commissioned as a memorialisation of the patron’s late mother and to honor his father’s birthday.

As such, the piece reflects themes of sorrow and joy, the bittersweet mingling of emotion not only in its content, but in also its context. Using mode rather than key, ‘A New Song’ is both minor without being sad and major without being triumphant. The result is anticipatory rather than anchored in the present.

‘A New Song’ is not only anchored in MacMillan’s ‘theology of music,’ but also in his Scottish influences, referencing the ornamentations of Gaelic Psalm Singing and piobariechd, as well as the steady foundation of a bagpipe drone. Gaelic Psalm Singing, for example, is a congregational worship style in which a leader loudly sings out the first line of a psalm and is gradually joined by the congregants, each embellishing the melody without care for harmonization. [3]

In piobariechd, or pibroch, a bagpiper decorates a melody with steadily increasing grace notes before concluding with a final ‘unadorned’ restatement of the theme, called an uriar. [4] Although MacMillan notates each embellishment, the final section of ‘A New Song’ acts as a type of uriar in which the vocals are simplified before surrendering to the organ solo. Underneath these decorations lies the steady support of a vocal drone, acting much like that of a bagpipe, ushering the voices in and out of silence. [5] 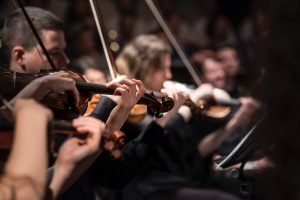 We expect music to replace silence, to drive it out of the space which music redeems. Instead, MacMillan interrupts the music with two prolonged silences, forcing the listener to commune with silence as we do with music. Indeed, silence can be understood as an action, something found and made. [6] The choir and organ fall silent at the conductor’s direction, creating silence that the audience encounters, influenced by the internal sounds of their own memories and experiences. In this society of ‘not waiting,’ people are frustrated by silence. Silence is the sound of waiting.

Second Temple Jews sang Psalm 96 every evening, accompanied by Psalm 106:47, ‘Save us, O Lord our God, and gather us from the nations…’ [7] Psalm 96, according to the Midrash, praises the God who redeems, and therefore even to the original audience, the psalm is at heart a prayer of anticipation for the coming Messiah. [8] Both Jews and Christians share this anticipation, despite differing visions of its realisation. In the Protestant tradition, the Book of Common Prayer instructs a reading of Psalm 96 one morning per month. [9] A morning reading anticipates the immediate future, to use MacMillan’s words, ‘the here and now, the mundane, the everyday…’ [10] Reading the psalm in the evening, however, as the Jews did, anticipates a distant future, not just tomorrow, but the last day and eternity beyond. Both readings are, therefore, anticipatory.

‘A New Song’ anticipates both tomorrow and eternity, but especially eternity. The choral climax centers around the line, ‘And he cometh…with righteousness to judge the world and the people with his truth.’ These words look forward with certainty, past the present toward the ‘Beyond,’ to quote MacMillan. Recalling Paul’s words in Romans:

For the creation was subjected to frustration, not by its own choice, but by the will of the one who subjected it, in hope that the creation itself will be liberated from its bondage to decay and brought into the glorious freedom of the children of God…For in this hope we were saved. But hope that is seen is no hope at all. Who hopes for what he already has? But we hope for what we do not yet have, we wait for it patiently. [11]

This announcement of Christ’s return is the choral climax, but not the climax of the piece itself. As the choir extends their final note, the organ finally takes over. Modulating continuously upward, the organ seems to search for a key in which to rest the final glorious restatement of the theme. Our ears are trained to expect resolution. We want heavenly choirs and trumpets to come marshaling in the joyful praise we expect from the words ‘sing unto the Lord a new song!’ But, just when the choir would join this refrain, the organ falls silent. The piece is over. Having been swept away toward glory, the listener is again surrounded by silence.  MacMillan leaves the listener with a sense of the incomplete, illuminated by hope and the promise of completion.

The ‘new song’ of Revelation is still to be heard. Until then, we live in the psalms. Waiting with great hope.