As Frances Borzello observes in her wonderful book At Home: The Domestic Interior in Art (London: Thames and Hudson, 2006), domestic interiors only became a subject worthy of a painter’s full attention in the modern era.  The production of domestic interior painting was driven by a new art market that included middle class patronage.  As a new subject, the domestic interior offered painters novel and interesting ways to comment on society, religion, politics, etc.  One particularly fruitful feature of domestic interiors is the demarcation of space: the walls that separate inside from outside, one space from another.

The painting below is by the great German painter Caspar David Friedrich, and it is titled Woman at a Window (1822): 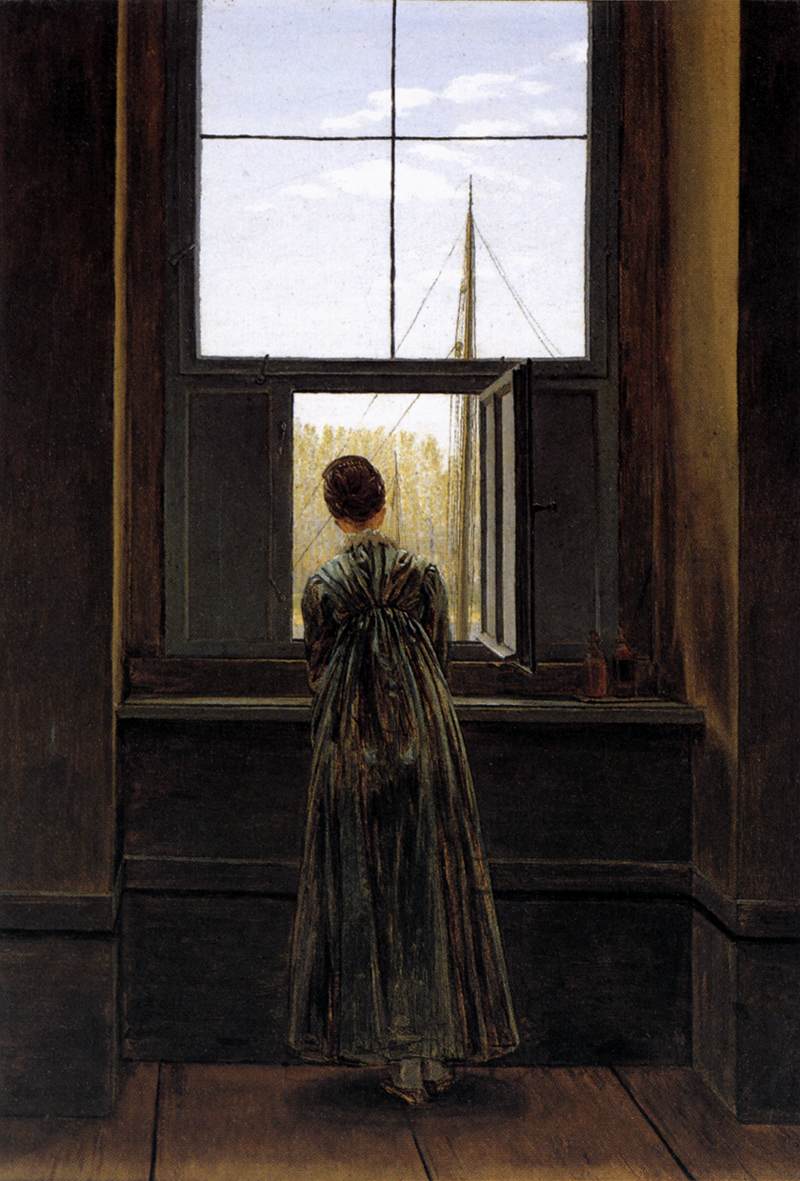 Here we see a woman turned way from us gazing out across a harbor and into the blue sky.  As a viewer, our gaze is drawn in by the intricate and subtle attention given by the painter to the woman’s dress, then it is drawn upward by the masts of the ships, and ultimately it is held by the stark contrast between the window’s cross bars and the bright blue of the sky.  In this way, the woman acts as a surrogate by leading our gaze to follow hers.  She is the image of the human desire for transcendence: to leave the mundane for a world of unknown and expansive possibilities.

Our second painting is by the Dutch painter Vilhelm Hammershoi, and is titled Bedroom (1890) 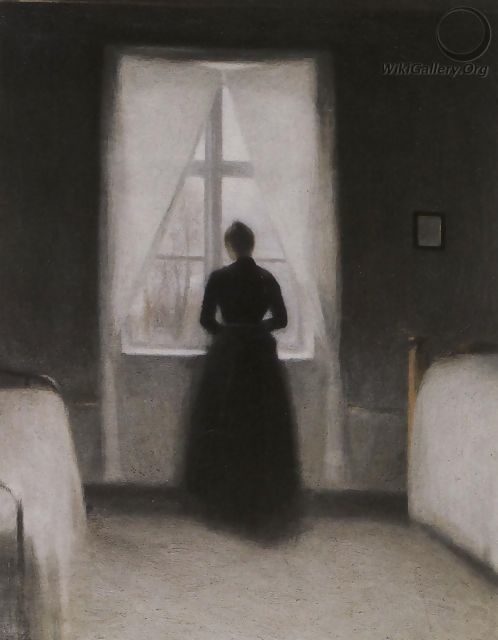 The connection with Friedrich’s painting is unmistakeable.  But what is interesting is the way that Hammershoi’s paintings is different.  Unlike Woman at a Window, this painting is far less interested in what lies beyond the window.  There is a minor attempt at some trees, but what captivates the viewer is the mysterious and atmospheric quality of the interior itself.  Transcendence has moved in.  This is not an image of the desire for transcendence as much as it is a recognition of spiritual immanence that pervades everyday life.

The third and final painting is by Joel Sheesley (one of our Featured Artists), and it is titled Interior with No Autonomy (2001): 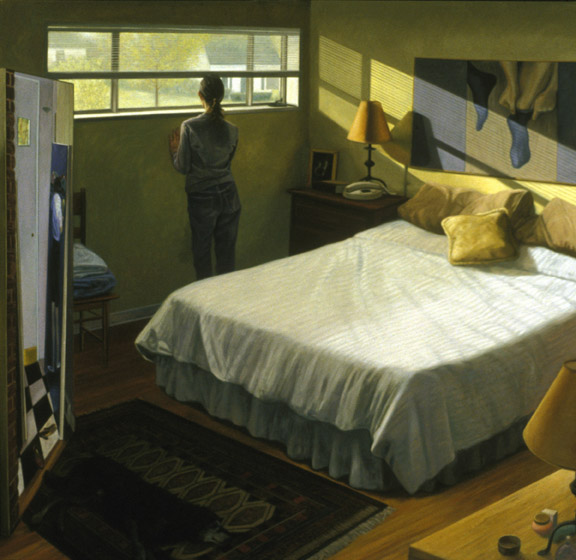 While “No Autonomy” is actually the title of the painting hanging above the bed, it seems that this woman is also experiencing a lack of autonomy.  By contrast to the other two paintings this window is much smaller, and the woman can just see out.  Sheesley offers us a version of the same motif through the lens of feminist social critique.  Is the woman trapped in her own home?  Is the woman another “domesticated animal” like the dog who lies asleep on the floor?

Sheesley also plays with the the idea of a window by juxtaposing the ‘real’ window with other paintings in the room.  Since the Renaissance, it has been commonplace to conceive of a painting as ‘like a window’ that opens the viewer toward another world.  While windows obviously suggest discontinuity between two different spaces, they also suggest the possibility of passage between them.  Are these paintings like windows, or are they more like the walls that confine the woman?

In relation to the paintings by Friedrich and Hammershoi, Sheesley’s painting is much more complex.  With the woman, we are drawn to look through the window to the neighborhood beyond, but at the same time there is much inside the room that competes for our attention.  What interests me about Sheesley’s painting is the way the outside light invades interior space.  The sweeping, slanted light on the far wall suggests a permeability between the outside and inside spaces.  Perhaps in this painting, transcendence is imaged not only as a space beyond ordinary life, but also as the entrance and permeation of the ‘outside’ within the ‘inside’.  Is the human desire for transcendence a longing to reach beyond our commonplace circumstances, or is it the longing to discover something extraordinary within our ordinary lives?  Or both?