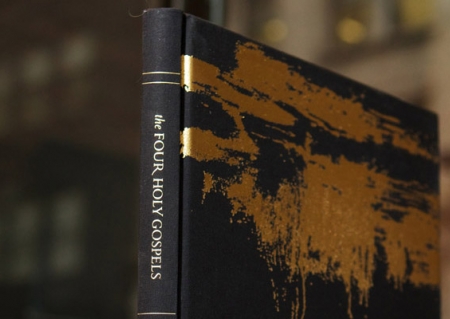 The honor of being commissioned to illumine The Four Holy Gospels came directly from Lane Dennis, the founder of Crossway Publishing.

“No single artist has been asked to illumine the four Gospels in over four hundred years,” he told me. Incredulous, I researched on the internet myself and found that he was quite correct. There have been notable efforts such as William Blake’s engravings of the book of Job, or Barry Moser’s efforts to create a series of woodcuts for the Bible, and St. John’s Bible by a group of Benedictine monks collaborating to create a beautifully illustrated pages. But I could not find any examples after the Renaissance of illumined pages, images working with the text to produce a visual whole. No Bible publisher had dared to tackle such a complex effort, especially using abstraction, let alone an effort to create accessible document for the masses. Thereby, I began my journey standing in the gap between illumined images and the Holy Writ of God filled with trepidation.

This gap, which I navigated while trying to create The Four Holy Gospels works, revealed a schism of far greater significance than I first realized.

I recently stood in the aisles of MoBIA, the Museum of Biblical Art, in Columbus Circle, New York City.  My Four Holy Gospels paintings were displayed in their exhibit On Eagle’s Wings: The King James Bible Turns 400.  I realized that most of the Bibles created after the Reformation lacked visual illuminations.  I could now see why Ena Heller, the director of the museum welcomed my pieces to be part of the exhibit. It would be hard for a museum to mount a visual exhibit for the 400th Anniversary because these Bibles, however valuable they are, are not the sumptuous visual objects that Bibles used to be. Owing partly to restriction in printing technology, partly to the Reformation unease with images, relationships between visual imagery and the text discontinued after the Reformation.

My works, which synthesize Japanese method and aesthetic of Nihonga with twentieth century abstraction, provided the background for the Word of God that transformed the world.  I stated in the preface of the project: “In taking on this project, it is my bold and ambitious prayer that this new century will see a revisitation of the illuminated legacy, with the Bible as a source of creative inspiration and artistic expression, in both the East and the West.

Theologically, this gap is also indicative of a common assumption in modern times: in order to communicate the gospel, it must be done with words alone.  The problem with this assumption is that even if we were to use “only words,” that act still requires visual decisions being made. A font must be selected and the document designed. Further, my mentor Dr. Tim Keller speaks often about the “art of preaching.” A good preacher must use artistry to convey the message of the gospel. Even if one holds the belief that Word of God alone is effectual in communicating God’s good news, how that is objectified is open to interpretation, particular to each culture and each preacher.  At the very least, it is extraordinarily important how visual design is applied to such a task, as bad design can impede communication.

In the East, the tradition of calligraphy always assumed that written language is visual art, and images were naturally part of how we communicated enduring matters.  Perhaps we are coming to a new age in the West, in which such integration of visual imagery and words as illuminations can lead to a synthesis of theology and art and, as a result, a new vista of theology will open up.

Makoto Fujimura (www.makotofujimura.com) – Exhibiting 94 paintings from my recent project The Four Holy Gospels, “On Eagle’s Wings: The King James Bible Turns 400” at MOBIA (www.mobia.org) Museum in NYC until 16th October, 2011. You can purchase a copy of the Four Holy Gospels.

2
Facebook Twitter Pinterest
LinkedIn Email
Written By
Makoto Fujimura
More from Makoto Fujimura
Culture Care is the vision of culture as an ecosystem and the...
Read More