I have spent time looking into my family history in detail and now have a good collection of photos. By researching my family history through Scotland’s People and Ancestry.com, and speaking to relatives, I have found some recurring themes which I find interesting. Most of my ancestors were farmers, weavers, or flax dressers in the 18th century. Many moved to Glasgow (if they weren’t already there) to find work and became calico printers, letterpress printers, grocers, wine and spirit dealers, umbrella makers, paper manufacturers, and writers. Many were living in cramped and difficult conditions, but they all managed to find a way to better themselves. I feel gratitude for their fortitude and resilience.

Separation and loss are two themes that kept emerging in my research, particularly through Scotland’s People. Many of the men died young, leaving the women to bring up their children and make a living. My maternal grandmother lost her brother to scarlet fever when he was 8 and her mother, who also had scarlet fever when she was 21, suffered the aftereffects for 30 years until she died. My grandmother, who was an only child, was sent to boarding school; though she had many relatives close by, she never knew them. My paternal grandmother lost her fiancé in the First World War but married my grandfather who was 14 years her senior in 1917. They had four boys, three of whom were in active service during the Second World War; fortunately, they all survived. 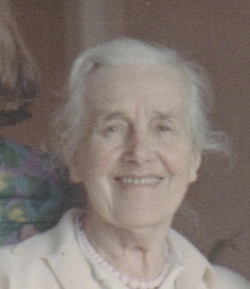 Although I recognise myself in my grandmothers, I know they didn’t have the opportunities I have had to fulfil my potential. I have had the dual privilege of going to art college in my twenties and continuing to paint, draw, and express myself authentically.  I am following the path that my ancestors began and am only where I am now because of them. My maternal grandmother wanted to go to art school but wasn’t allowed because of social constraints and parental expectations. She began to paint when she was 60 and did so for 12 years. My other grandmother was very spiritual, and I feel she is always with me.

I exist because of my ancestors. I am the interface with the past – the interface between my ancestors and life. I want to honour them by making an artwork for the Interface Exhibition. I am using photographs of my female relatives; by placing them on the paper as I have, I feel they are looking out for and watching over successive generations.

For me the earth is full of the past and ancestors. I’m working from a place of deep connection with the earth. To represent them in my work, I painted a matrix: vertical lines to represent previous generations and horizontal lines to represent relatives of the same generation. Interestingly, the origin of matrix is matris meaning “womb” in late Middle English from the Latin matrix meaning “breeding female”. A matrix is the environment or context in which something, such as society, develops and grows. The word matrix feels ancestral. 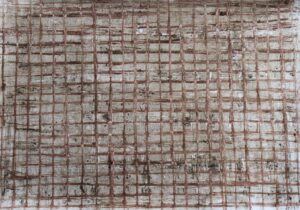 I dipped a small bamboo cane from the garden into a mixture of paint and earth and painstakingly painted the lines. The bamboo does not hold much paint. I like this method because, for me, it represents the ancestral way of life – the natural rhythm of the land; ploughing; the lengthened time; the hard work and feeling of the earth. It is not an easy method and is, at times, frustrating. I planned to paint a red tree to represent their blood running through my veins, but my fingers accidentally touched the paper and, as I liked the marks they made, I decided to create a hand. 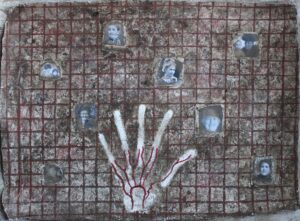 I began drawing and mark making on top of the matrix as I felt it would represent me as the interface. Usually my drawing flows freely, it feels right, and I don’t question it. In this instance, everything I did felt wrong; so, I smudged it, or half rubbed it out. I began to understand that the message was that I am not separate from my ancestors, and they are not separate from me. I merge with them; I like that. I feel a connection where there was separation. As Thich Nat Hanh wrote in “No Death, No Fear” after losing his mother, “I knew this body was not mine but a living continuation of my mother and my father and my grandparents and great-grandparents. Of all my ancestors. Those feet that I saw as ‘my’ feet were actually ‘our’ feet. Together my mother and I were leaving footprints in the damp soil.”[1] By doing this artwork, I have gained a greater understanding, a deeper knowing and a love for my ancestors and myself. I have enjoyed spending time with them.

Julia’s artwork and the Interface exhibition can be viewed online here.