Author Ewan Bowlby reflects on writing a short story in collaboration with illustrator Karlee Rene, for the next of our series of artist reflections highlighting the Transept Interface exhibition.

What does it mean for a piece of writing to be illustrated? And how do you go about writing something intended for illustration? These were the questions that I was asking myself as I started writing a short story for the Transept Interface exhibition. Because I was collaborating with visual artist and illustrator Karlee Rene (who is also my fiancée) I needed to ensure that while I wrote, I was crafting a piece that would be suitable for illustration. But having never had my writing illustrated before, I was unsure of how to achieve that. I wondered if I should leave gaps in the verbal pictures that I was painting for Karlee to fill with her art. Or, perhaps I should make these pictures clearer, more obvious, to make her task as straightforward as possible? It is now rare in contemporary Western culture for ‘serious’ writing that is intended for adults to be illustrated. The ‘Golden Age’ of illustration – of Arthur Rackham, Edmund Dulac, Kay Nielsen – now seems a distant memory. Despite our culture becoming increasingly visual thanks to social media, internet streaming and smartphone cameras, illustrations have become the sole preserve of children’s books. This phenomenon is something Karlee explored in her research, so I was excited and interested to investigate how her art could enrich my literary exploration of some sensitive, weighty subjects. 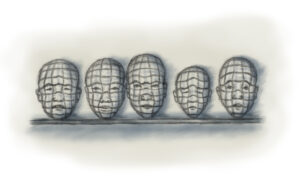 My intention was to use a piece of fantastical fiction to reflect the experiences of a cancer patient undergoing radiotherapy. Having received seven weeks of daily radiotherapy myself, I was aware that this is a strange and potentially traumatic ordeal for patients, so I wanted to try to use fiction to convey something of the surreal, unsettling nature of this form of treatment. As a symbolic focus for this project, I chose the plastic masks that patients are fitted for before radiotherapy, designed to hold a patient’s head in place while radiation beams are fired at their cancer. These masks, the moulded outline of the patient’s face, are stored in the treatment rooms, creating a bizarre spectacle. I decided to imagine a conversation between two of these masks, bringing them to life to provide two contrasting perspectives on their surroundings. The radiotherapy treatment room is the stage for a ceaseless drama of disease, suffering and healing, with heightened emotions such as fear, anxiety and hopefulness always present. And it is as if the masks sit, watching this drama unfold, passing judgement. Whilst one of the masks would offer a cynical, cruel view of the treatment process and patients, the other would suggest a more hopeful, generous way of understanding. This challenge to despairing, callous cynicism would give me a means of gesturing to the signs of promise, humanity and grace that often manage emerge in a clinical environment. 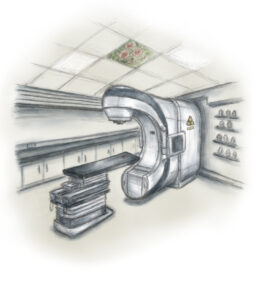 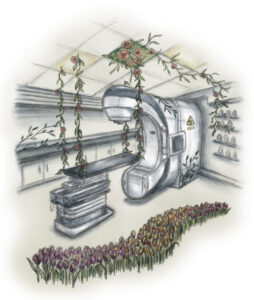 As I began discussing my plans for the piece with Karlee, these ideas developed and deepened. Talking through how this narrative might be illustrated, we realised that Karlee’s images could make the intimations of hope and joy in my writing richer and more powerful. Learning to think visually, rather than purely semantically, I saw that I was asking readers to imagine two contrasting pictures of the treatment room: one dour, dull, intimidating, and the other welcoming, heartening, captivating. Karlee and I started to see the difference between these pictures in terms of ‘enchantment’. The more optimistic, inspired mask could perceive how a hospital room might be full of signs of hope, when seen through imaginative human eyes. Understanding my narrative in this way pushed me to exaggerate the contrast that I was presenting, emphasising the enchanted, magical qualities of the treatment process seen from a hopeful perspective. I learned that true collaboration with an illustrator begins at the point at which ideas begin to take shape. The added visual dimension to our piece gave me a form of courage, motivating me to pursue bolder verbal imagery.

In a way that my words alone could not, her visual art draws attention to the importance of defiant, imaginative hope for those navigating the bewildering and daunting world of modern medicine. 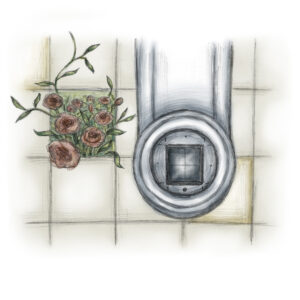 When Max Weber wrote about the ‘disenchantment’ of the West, he saw innovations in science and technology as central to humanities’ move away from the superstition of religion and ‘magic’.[1] Healthcare institutions have been paradigmatic of this shift, eschewing spiritual care in favour of a reliance on increasingly advanced scientific tools: medicine, machines, computers. In the end, what Karlee’s illustrations provided were vivid, vibrant and arresting images of a clinical world re-enchanted: a room in which beauty, natural splendour and ‘magic’ were woven into conventional clinical procedure. The series of six illustrations she created perfectly capture the dramatic difference between a sterile space of metal and plastic, and a place in which grace and enchantment have begun to return. In a way that my words alone could not, her visual art draws attention to the importance of defiant, imaginative hope for those navigating the bewildering and daunting world of modern medicine. The finished piece, with its symmetrical balance of three illustrations of the treatment process mirrored by three ‘enchanted’ renderings of the same scenes, reminds us of what was lost when healthcare was ‘disenchanted’.

View the finished story with illustrations at the exhibition virtual gallery here.