Describing Greenbelt and its vast spectrum of acts, talks, moments of reflection and worship, musical and artistic spaces, meeting places, performances and comedy is a difficult proposition. Add in 5 nights of camping in the inner of Cheltenham race course along with a 10,000 strong village of other tents, campers and caravans as well as all the attendant difficulties of the fickle British weather and you have an arts festival experience like no other. Over 22,000 people bought tickets for Greenbelt 2011.

This year the focus seemed to be on some of the leading lights of the emerging church movement. Nadia Bolz-Weber was a real find for me, while Brian McLaren was insightful and challenging in equal measure. Rob Bell, on the other hand, seemed to confine himself largely to personal anecdotes and stayed away (unfortunately) from approaching any of the content that has made his recent books both so saleable and so controversial. It was a pity because it seemed to me that if there is anywhere you can throw a cat among the pigeons and get people talking, it’s at Greenbelt. His Q&A on creativity left much to be desired as he outlined a 3-pointed “sermon” (which he made sure the 1000 strong audience noted was a particularly American evangelical thing to do) wherein creatives must realise 1) they are made in the image of God, and God has created all things 2) they should “write, write, write” and not edit till later and 3) they should ensure they take a break every now and then to avoid creative blocks. Pete Rollins (from Ikon Belfast), Shane Claiborne (Rend Collective) and Phyllis Tickle were also around but other commitments meant that I didn’t see them.

I did however get around to all the “arts” venues on site. Highlights included a showing of part of the Methodist Art Collection, titled “Art for Everybody,” and the Angels of the North exhibition. Angels of the North was a curated exhibition of artists based in the north of England. It took as its theme that of the wider festival, “Dreams of Home.” Works by Larna Campbell and Phill Hopkins particularly caught my eye. 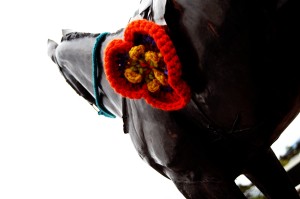 Participatory art was also a feature at Greenbelt. In addition to a Scriptorium and a child-friendly, all-ages art space facilitated by Infinite Beads, there were  a number of other opportunities to make art. There was a photo-swap, which began as a informal photography exhibition, as well as some knitting bombs that appeared over the weekend. The example of participatory art that most caught my eye was an installation by Simon Smith and Simon Emery (both involved in the illustration and design of children’s books at Lion Hudson) where Max’s bedroom from Where the Wild Things Are was progressively transformed across the weekend. All who walked into the area of the installation were invited to cut out a leaf. Simon Emery later added these leaves to the ceiling of Max’s room. 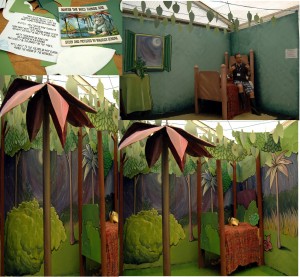 I participated in a panel on creativity and faith chaired by Ned Lunn, with fellow panelists: Rev Dr. Pete Phillips (Director of CODEC, St Johns’ College, Durham University), Andy Mort, a musician who performs as Atlum Schema, and Peter Moreton, one half of Applecart, a theatre company that retells Bible stories in new and refreshing ways. Applecart’s latest videos are available as a free download from 12baskets. The panel was sponsored by Bigbible.

Finally, there was a vast array of music. I barely scratched the surface of the variety. I did catch Miriam Jones and the Red Sea in extremely fine voice as well as Eska whose vocal control was just stunning. There was everything from Dub Step and Electronika to the humour of Folk On as well as the gravely-voiced Billy Bragg, singer-songwriter Ron Sexsmith, perennial Greenbelt favourite Martyn Joseph, folk singer Kate Rusby, and the powerful gospel music arrangements of IDMC to name but a few.

It’s very difficult to explain Greenbelt, although Tracey Emin’s description that it was the “Christian answer to Glastonbury” goes some way [BBC]. It was intriguing to hear people describe Greenbelt as some kind of “utopia” or a glimpse of heaven. I’m not sure I’d go quite that far, but it certainly is a space to explore different Christian expressions of faith. In addition, the refreshing way in which the festival is built around the arts makes for a family-friendly and generally enjoyable experience.

Image Credit for top image; all other images by the author.

1
Facebook Twitter Pinterest
LinkedIn Email
Written By
Anna Blanch
More from Anna Blanch
As I looked around my cottage-by-the-sea this week, I counted no less...
Read More