I only recently became acquainted with the work of Brooke Waggoner, but her mysterious, playful and complex music is already beginning to feel like an old friend... 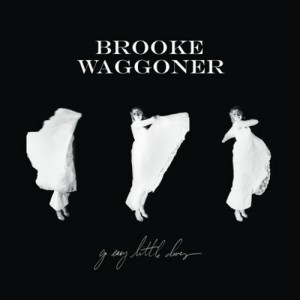 I only recently became acquainted with the work of Brooke Waggoner, but her mysterious, playful and complex music is already beginning to feel like an old friend.  Waggoner’s music stands out as remarkably original.  Perhaps her voice shines through so clearly because she is able to combine (like no one else I know) classical music, musical show tunes and an earthy singer-songwriter style in a surprising and altogether delightful way.  On top of this, she fits so well with that group of contemporary folk musicians that I have come to associate with Nashville, where she currently resides, and that I enjoy so much.

Waggoner comes from a classical music background with 17 years of formal training. She graduated with a Music Composition & Orchestration degree from Louisiana State University in 2006.  After graduating, she left for Nashville and began developing her current music.  Brooke was nominated for an Independent Music Award for “Best Folk/Singer-Songwriter Album” in 2009. Also in the fall of 2009, Brooke won the Nashville Music Award for “NBN Emerging Artist” of the year.

Waggoner has now released three albums independently, with all music being fully written, orchestrated and arranged by her. Waggoner’s debut release was an EP titled Fresh Pair of Eyes (2007) called “one of the most exciting releases to come out of America in 2007” by the London Sunday Times. After touring nationally thru the spring of 2008, she released her second album, Heal for the Honey, in the fall of that year.  In 2009, Waggoner took on the role of producer for her third album, Go Easy Little Doves. You can purchase all of her albums at her online store.  You can also listen to a number of her songs for free on her website.  Go Easy Little Doves has received some attention from various journals and magazines, and so I leave you with their recommendations:

” [Go Easy Little Doves] embraces a surprising, unconventional, sophisticated style of pop that veers toward the symphonic—and the dozen moody, airy compositions and arrangements, written over the past decade, are all her own. With specificity and emotional range, the songs transcend the “atmospheric” genre.” (The Wall Street Journal)

“While it assumes a slower pace than her previous work, the album still centers on bright piano progressions and whimsical, heartfelt lyrics. Vibrant string arrangements and choice woodwinds swell and fall; vocally, Waggoner performs in earnest—her voice floating over quivering violins and soaring into the ether.” (Paste Magazine)

“Cinematic and vividly imagined, Go Easy Little Doves is an impressive record from a burgeoning talent. If Waggoner can trim off some of her remaining excesses on her next release, she’ll be more than fine; she’ll be a star.” (Wears the Trousers Magazine)

[Special thanks to Jade for all of the helpful information!]