Giulia Privitelli explores our “restless search” for beauty through  Saint-Exupéry’s The Little Prince and the tragedy of Narcissus and Echo.

‘What a queer planet!’ he thought. ‘It is altogether dry, and altogether pointed, and altogether harsh and forbidding. And the people have no imagination. They repeat whatever one says to them … On my planet I had a flower; she always was the first to speak …’

Somehow, these words, uttered into one of the longest, bleakest nights of human history, still resonate, in all their luminosity, with us today. They are words emanating from the inquisitive mind of a young prince—and the pen of an older pilot—who refuses to settle for the grimness of what he sees and the sameness of what people say. Reflecting on all this lifelessness, an image comes to the little prince’s mind: a flower back home, a flower which cannot repeat what others have said because it is always first to speak: naively, impulsively, proudly, but also vulnerably, authentically and, therefore, uniquely. Even though the flower caused the little prince great heartache and, indeed, was the reason he chose to leave his asteroid-home, the memory of these words and her image—despite encountering countless other flowers throughout his journey—are what ultimately brought the little prince to recognise and understand the flower’s unique identity and authentic beauty. Only after a long journey of discovery and relation with others could he finally comprehend the extent of human blindness and of his own misguided love; only at the end of much exploring does he learn that ‘what is essential is invisible to the eyes.’ His eyes, rather, were needed to listen, and his ears to see. Only then could he return home, to his uniquely complex, demanding yet beautiful flower who had already seen him, known him, and loved him for who he was. 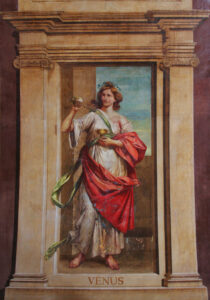 The adventures of the little prince may very well resonate with the real experience of most, if not all, young people, increasingly estranged in a world that, for various reasons, instills the desire for home.[1] Ours is a world staged for lament and unbelief, a world in which seemingly impossible opposites—freedom and responsibility, despair and hope, ugliness and beauty—do not sit well together. In the course of history, looking and listening likewise became practically opposed to one another, echoing further the seemingly irreconcilable fragmentation and disorientation of the strangely disembodied times we live in.[2]

There is, in many highly developed societies, a shift towards lifestyle choices which promise a higher degree of things done well and honestly, be it in self-image, organic and sustainable technologies, political and economic transparency, and so on. There is an unprecedented desire for a restored connection with one’s self, with nature, with some invisible quality of creation’s connective tissue. Although an online search on the relationship between youth and beauty in contemporary culture returns an overwhelming number of articles on the effects of physical attractiveness and body image on social and psychological wellbeing, this association between beauty and health, does not contradict the profound desire for belonging, for a sense of interior harmony and beauty, for—by a little stretch of the imagination—a flower ‘back home’ which speaks first and is, therefore, heard. Before the great and threatening abyss of isolation and self-estrangement, even the most self-absorbed individuals desire to be seen and heard by what is other, even if only to affirm their existence. At the most rudimentary level, this desire to be seen and heard is nonetheless an expression of humility, so necessary a condition, as Pope St John Paul II once put it, ‘for man’s interior harmony, for his interior beauty… a young man, a young woman, must be beautiful first and foremost inwardly.’[3] Without it, all other efforts aimed at perfecting one’s idea or image of beauty are futile, if not destructive.

So, if the desire is there, what then threatens to obstruct this inward movement towards harmony? The story of Narcissus and Echo—a tragedy in which beauty does not save but leads to death—gestures at an answer. It is a story about a youth whose beauty was not only kept from himself but also the world around him, effectively making it impossibleto encounter the other, and, therefore, to develop his own sense of identity.[4] Thus, in his isolation and alienation, the young Narcissus was unaware of his own beauty. This lack of personal encounter left a gaping hole—like some bottomless pool—for self-obsession to surface; a hole filled by more of the same. His self-obsession is encouraged through the repetition of his own image, and the illusion that it is ‘other’: the voice of Echo, repeating his own words, affirming a reality which—oblivious to him—is based on his own image and words. Narcissus cannot encounter anything other than the same.[5] Thus, he leans into his image, or ‘simulacrum’ rather, which is, as we know from the story, a death sentence. But the real tragedy of Narcissus is his inability to encounter what is other, and therefore, ignorant of the beauty bestowed on him, did not know himself. And to know oneself, according to a Socratic dictum, is the beginning of salvation and entrance into the sacred.[6]

The tragedy of Narcissus, however, often conceals a hopeful aspect of the youth’s enslaved condition. While Echo, like the people the Little Prince observes, is condemned to repeating only what others say, and is shunned for it, she nonetheless serves as an aural mirror of Narcissus’ most profound desire: to encounter a hidden beauty, and to hear in that image a voice which not only affirms his beauty but, in so doing, affirms his identity, his existence and reason for being in this world—his mission which, as the word implies, sets him free.[7] The affirmation of one’s beauty, then, is innately linked to the notion of identity and mission[8]. Indeed, all youth, even the most reserved—like Narcissus—desire to be seen, perhaps, in a way they are themselves incapable of seeing. Much of our online culture, where youth are undeniably present, is oriented around the culture of being seen. Perhaps, this is so since to be seen is, in a way, the first step to being heard.

The important movement is, crucially, from sight to sound. Sight alone can only get us so far and can, furthermore, be dangerous. All that is seen, like Narcissus’ reflection, can be mistaken for what is beautiful, and what is beautiful (for example, Narcissus, the person) falls into oblivion. In some religious traditions, the oracle or the voice of the divine is, in fact, paramount: the spectacular sight of the burning bush, for example, leads to the sound of God’s voice, and what that voice reveals is, often, what things are; the call of truth that calls into itself by calling into being and ‘setting one free’.[9] Therefore, what is implied by speech is also foreshadowed by the image: to be seen implies that there is another, and in that gaze—in the act of being seen—there is relation and, as it were, a reason for being. Pope Francis, too, reminds us of the importance of the penetrating gaze of Christ, and the simple rhetoric of ‘Come and see’ (Jn 1:39; Rev 6:1): ‘Despite the noise and confusion seemingly prevalent in this world,’ he writes, ‘this call continues to resonate in the depths of your heart so as to open it to joy in its fullness.’[10]

The continuous search for what is wholesome and free—like beauty—favours then those eyes which are keen to listen, and ears which listen so as to see.

We mentioned previously how the affirmation of beauty is a revelation of both identity and mission. It is only one small step further to reconsider Narcissus’ own echo, rising from the depth of the reflecting pool, as a mere reflection of the cry of his heart, rising from the depth of his being: Farewell, it cries, Go![11] This is the hidden, self-effacing beauty that allows others to be seen, that orients the beholder towards ‘genuine social solidarity and the culture of encounter.’[12] This desire, then, can be subsumed into the essential call to ‘Go!’ To turn again to Pope Francis’ address to young people: ‘What is this “new land” for us today, if not a more just and friendly society which you, young people, deeply desire and wish to build to the very ends of the earth?’[13] This ‘farewell’, however, is not the itinerant experience of the contemporary tourist, who ‘goes’ to see and discover cultures, fragments of beauty, fascination and wonder, without being truly transformed. This is perhaps just an outward echo—of which many boastful resonances are splashed across various social media platforms—of the profound desire to be seen where one is, and with whatever limits one has. The restless, youthful search is, in other words, the repressed desire to be seen ‘at home’, fully present, fully inhabiting a space where encounter is possible and open to change and transformation.[14]

The continuous search for what is wholesome and free—like beauty—favours then those eyes which are keen to listen, and ears which listen so as to see, to be able to ‘see’ with a liberated gaze, and especially, with the eyes of the other who sees what is ‘good’, what is beautiful, precisely where one happens to be, at all times. Neither words nor images will thus have the final say, for words would inevitably lead to sight, and sight to words. And beauty, that ineffable and unqualifiable thing, like youth, can dance in between. The restless search, embarked on in youth, is not something to be repented or even, later, regretted; it is an implicit part towards the recovery (and discovery) of beauty; the same youthful search which elicited St Augustine’s lament at the mid-point of his life: ‘late have I loved you, beauty, ever ancient, ever new! Late have I loved you!’[15] The discovery of such a beauty, even if discovered at the very end of one’s search, would not permit such destructive, self-absorbed regret. It is a beauty that gives birth to flowers, not thorns. And thus, could grow ‘a sweet flower… golden and white, the white around the gold.’[16]

[6] The Greek injunction which translates to ‘Know thyself’ is believed to have been inscribed on a stone in the forecourt of Apollo’s temple at Delphi, a memento mori which serves as a reminder to ‘know that you are only human; this temple is not yours!’