I freely embrace the irony of publishing, on this entirely digital platform, two new poems which challenge the reach and ubiquity of the digital realm, or at least explore the tensions that run between those familiar binaries: digital/analogue, virtual/actual, abstracted/embodied. We all use, enjoy and benefit from this veil of images on screens which we have woven and spread over our world.  Yet we all feel that somehow we are screening truths out as well as screening them in.  However vivid, there is something insubstantial and disappointing about our online world and the attention it draws and drains from us is leaving us less and less able to practice real and undistracted presence in and to the actual.

This sense of tension and dilemma is universal, but it must be felt in a particularly acute form by those whose lives and faith are centred on the Incarnation, on the full ultimate and particular embodiment in one place and time of the God who is in and beyond the whole cosmos.

Indeed it may be the theologians, moving as they do between the poles of immanent and transcendent, particular and universal who will help us resolve our tensions and solve our binaries in ways that do justice to both sides.

In the first of these two sonnets, Photo-graphy, I reflect on the etymology of the word photography: a portmanteau of the Greek words for ‘light’ and ‘writing’. What could be more beautiful and expressive than to write with light itself? And in a sense that is what photography does. It is without question a great art form. And yet the advent of the instant, endless clicking of iphone cameras, the sense of people seeing only in or through their screens rather than with their eyes, is unnerving. There is also, in the ubiquity of the digital image, some suggestion that just as the image with all its beauty and variety is ‘only’ a product generated by machine-read code, so by analogy we as human beings are somehow mindlessly generated by the code of the genome, all of us, like digital images, entirely reproducible, entirely deletable.

At the end of the poem I try to turn away from the screen and ‘seek again the analogues of life’, and the second sonnet, Off-Grid, is about one particular experience of doing that. It is about ‘going to earth’ in an almost literal sense. It is set amidst Iron-age earthworks and old barrow-mounds. It is about the sense of being earthed and rooted, the sense of time not as the fleeting arrow, the deleted image, but of time as a gradual accumulation of being, in rich layers over a particular place. And from that place it gestures, I hope, towards the paradox, that it is in the most particular, the most embodied and earthy of our experiences that we can suddenly experience an intimate link with heaven, the tug and pull of the transcendent.

Light-writing? Is there something left to write?
The camera must supersede the ode
As every subtle shimmer of the light
Is rendered and reduced to so much code
On. Off. On. Off. On. Off. The noughts and ones
Add up to nothing you can comprehend,
A print-out, like the print-out of old bones,
A genome iteration without end.

We cannot code or decode our own baggage,
A cut too subtle for our subtle knife,
So I cut free from my uploaded image,
To seek again the analogues of life,
The mysteries we screen off with this screen.
I start again, to see and to be seen.

Slip past the scanners and creep in between
The wireless meshes of tenacious networks,
Stay with the mystery, remain unseen,
Unfindable behind these shadowed earthworks.
Wait till the waves are gone, the way is clear,
The one location, always unlocated,
The last of earth, is always somewhere near.
Time out of time, uncounted and undated,
Awaits you there, but you must come unknown
Through your own shadow, crouched and hushed and deathly.
You lose the light, and find yourself alone,
Feeling your way beyond the only path
Through that dark wood, until you catch your breath
And your lost heart is earthed to the unearthly.

Mariner: A Voyage with Samuel Taylor Coleridge
by
Malcolm Guite 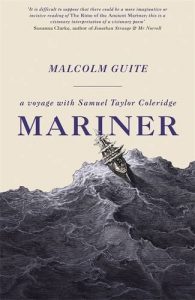 Mariner: A Voyage with Samuel Taylor Coleridge (Hodder & Stoughton, 2017), Guite shapes and structures his biography around the story Coleridge himself tells in his most famous poem, ‘The Rime of the Ancient Mariner’.  Of course ‘The Rime of the Ancient Mariner’ is more than just an individual’s story: it is also a profound exploration of the human condition and, as Coleridge says in his gloss, our ‘loneliness and fixedness’. But the poem also offers hope, release, and recovery; and Guite also draws out the continuing relevance of Coleridge’s life and writing to our own time.

This latest work has garnered much early praise from reviewers:

‘Malcolm Guite has established himself as one of the leading Christian poets of our time. This positions him to offer a distinctive reading of a poetic giant of the past, S. T. Coleridge. As expected, Mariner is exceptionally rich, penetrating and absorbing.’  (Jeremy Begbie, Duke University)

‘This is a superior life of Coleridge … Guite has complete mastery of the primary and secondary literature [and] masterfully interweaves sections from the Mariner with episodes from Coleridge’s unfolding life to both enhance our appreciation of Coleridge’s poetic powers and to bring us up to speed on all that is known of his later life.’ (The Heythrop Journal)

For those readers interested in obtaining a copy of this groundbreaking work, Church House Bookshop is offering a £5 discount and may be purchased here.