At the heart of advent is the attitude of receptivity. Gabriel appears to Mary and delivers the earth-shattering news: “You will be with child and give birth to a son, and you are to give him the name Jesus.” Mary’s first response, quite naturally, is incredulity: “How will this be, since I am a virgin?” When Gabriel responds by describing the means for this miracle—“The Holy Spirit will come upon you, and the power of the Most High will overshadow you”—you would expect Mary’s incredulity to solidify. Instead, Mary responds with startling receptivity. “I am the Lord’s servant. May it be to me as you have said.”

Advent is a time when we celebrate and remember Mary’s receptivity to the unknown, to the unexplainable, to an extraordinary word from the Lord in an ordinary time. Many biblical commentators and theologians highlight Mary’s obedient receptivity. Mary received a word from the Lord as delivered by Gabriel, and she obeyed. But in reading through the first chapter of Luke recently, what stood out to me was Mary’s artful receptivity. She didn’t just respond in obedience; she responded with poetry and song. In other words, Mary’s receptivity to the God’s messenger at an unexpected time fueled her creativity.

Zechariah also heard a word from an angel telling him that his wife Elizabeth would have a son named John, and he too responded with incredulity. But the angel didn’t give Zechariah a second chance. Because of his skepticism, the angel silenced Zechariah. In the midst of his silence, Zechariah saw the promise of God unfold as Elizabeth’s belly grew. Repentantly receptive, no doubt, he named his child “John” by scratching his name on papyrus as the angel had commanded. Immediately, “his tongue was loosed” and he began praising God is song and poem, just like Mary.

Is it merely a coincidence that the Advent story links skepticism with silence and identifies receptivity as the root of artful praise? On the contrary, I suggest that the pattern we observe in this story is the pattern of all human creativity. Receptivity to the voice of God in creation and canon gives birth to art, just as Mary’s receptivity gave birth to a song and eventually to Jesus, the form of Beauty. 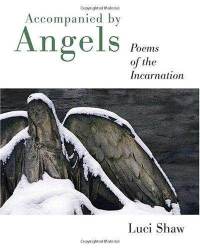 In our technological age, however, receptivity—patient attentiveness, responsive openness—is becoming a scarce virtue. In her poem “…for who can endure the day of his coming?”, Luci Shaw affirms the power of God to grab our attention despite our skepticism of contemporary Gabriels.

…Are our sensibilities too blunt
to be assaulted with spatial power-plays
and far-out proclamations of peace?
Sterile, skeptic, yet we may be broken
to his slow, silent birth, his beginning
new in us. His big-ness may still burst
our self-containment to tell us,
without angels’ mouths, Fear not.[1]

Advent is a time to hone our sensibilities, asking the Holy Spirit to melt our sterile, skeptic hostility to the unknown with responsive receptivity to God’s writhing revelation. During Advent, we realize that there is too much wonder in the Word and world to contain our creativity. Some choose to suppress it, but others, like Mary, express it through artful praise.