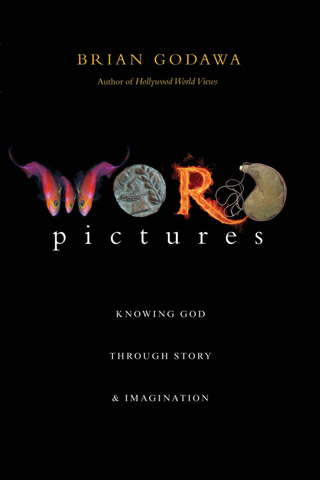 Word Pictures is an extended reflection on the dynamic interplay between word and image understood as categories of discourse. Word refers to rational discourse, and thus books, reason, doctrine, content, propositions, and truth. Image refers to imaginative discourse and thus experience, style story, creativity, art, and beauty. Brian Godawa confesses that he was once a word man, captive to a rational view of reality and his Christian faith, but gradually came to see the value of the image and the power of imagination.

This book takes the readers on a historical, biblical and personal journey of discovering the value of imagination and the way it fits with reason rather than contradicts it. Rather than a carefully developed argument, there are several different angles from which Godawa views this issue, integrated with a plethora of examples. One common theme that keeps cropping up is that the Bible is not just propositional truth, but a rich collection of image-oriented discourse, full of stories, theatrical presentations, and literary devices. As a result, Christians needs to read their Bible with aesthetic exegesis to grasp its beauty, which will move us to participate in the divine drama it presents.

To help illustrate the power of images, each chapter is printed in different font, selected to match the theme of the chapter. This was interesting, but I was more attracted by several valuable insights. I appreciated Godawa’s emphasis on the theatrical nature of God’s interaction with his people, insisting that we must not turn the theatrical into the theoretical. At one point, he asks a question I have often wondered about the Lord’s Supper: “We have turned a meal that is symbolic into a symbol that is meal-like. Why?” (79) In addition, Godawa spends considerable time explaining the nature of biblical subversion, drawing on ancient history and particularly the work of Tom Wright to explain how Christianity subverts secular stories. He then transitions to talk about how Hollywood films enact this same subversion of the Christian story, where the roles are reversed.

Even though I appreciated these insights, several weaknesses of the book prevented me from being riveted. First, when Godawa states that only 30% of the Bible is propositional truth and 70% is image-oriented, he seems to be forgetting that propositions do many things, including many of the things he associates with images. I understand the distinction he is trying to make, but I think it creates an unnecessary divide between propositional truth and images. Second, Godawa applies the same concept of subversion to the Hebrew worldview as he does pagan worldviews, but should not the relationship between the Old Testament and New Testament be interpreted as fulfillment rather than subversion? Third, the brief forays into popular culture seemed to distract from the overall point at times, and the interaction remained shallow. For example, arguing from an “R-rated Bible” to watching R-rated movies is simplistic and raises too many issues to be helpful. Fourth, there are several times when Godawa resorts to vast generalisations, such as the superiority of movements such as the Protestant Reformation, Puritanism and the founding American experiment over Egypt, Greece and Rome.

Overall, Word Pictures reads a bit like an interesting but disjointed collection of short essays around the general theme of valuing image as much as word. There are several valuable insights throughout, but this book is not the final or most coherent word on knowing God through story and imagination.