The purpose of this volume is to introduce and provide context for Blake’s Genesis manuscript. The editors present this unfinished text, covering sections of the Bible’s first five chapters, in two parts. Part 1 is a stunning, to-scale (see p. 20) presentation of Blake’s 11 leaves of illuminated text, a transcription of his calligraphy, and a text critical analysis of Blake’s text compared to the Authorized Version. Part 2 includes a foreword by John Murdoch, an essay by Robert R. Wark, and substantive commentary on the manuscript by the editors.

As mentioned, Part 1 commences with a presentation of the manuscript leaves themselves. Leaves 1-6 are partially painted (watercolor), leaves 7-11 only sketches. None of the leaves are complete but each contains some text and at least an under drawing of the illustration. The leaves move from most complete—leaf 1 being the nearest to completion—to most primitive—leaf 11 contains only three lines of text and a rough sketch. This continuum of completion sheds light on Blake’s compositional techniques. The transcription of the text of the leaves is also helpful in that it gives insight into Blake’s scribal mentality: his mistakes, strange spellings, and corrections. It also highlights his fascination with the Hebrew words adam, “man,” and adamah, “ground/earth,” as he continually transliterates and juxtaposes these words (see Gen 2.6-7 for example). Finally, the list of textual differences between Blake’s manuscript and the KJV sheds light on his controversial theological perspectives, highlighting his interpretive choices. Part 1 paints a helpful and visually pleasing portrait of William Blake the scribe. 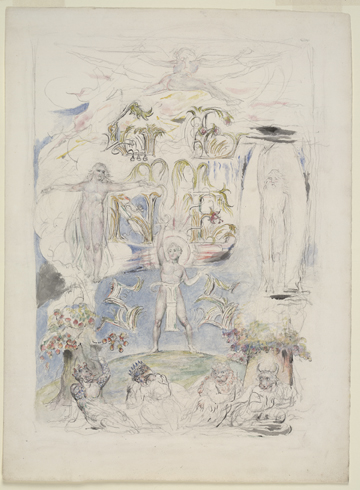 Part 2 commences with a short foreword and an essay by Robert R. Wark, a former curator of the Henry E. Huntington Art Gallery where the manuscript is held. His essay contains a history of the unbound manuscript, a description of its physical characteristics, and a discussion of the contents of the preliminary sketches. He notes the dates implanted via watermarks on leaf 1, 2, and 7 (1821, 1826, 1826) and argues that these dates suggest that the Genesis manuscripts may be the last work ever prepared by Blake (p. 17). He also comments on Blake’s artisitic technique referring to his “pencil draftsmanship” as “free but a bit fussy” and he notes that the preparation of text and accompanying illustrations “proceeded simultaneously” (p. 17), and cautions against making assumptions about Blake’s symbolic intent based on incomplete sketches. Furthermore, Wark deduces that Blake worked on the manuscript with a Hebrew text of Genesis before him based on the word play of Adam and the divine name (p. 18). Overall, this essay is a concise introduction and description of the scholarship, history, and contents of the Genesis manuscript.

The final component of this volume is the editor’s commentary on the manuscript. In this section Crosby and Essick argue that the manuscript illuminates Blake’s interpretation of Genesis. Principally, “the alterations and additions Blake brought to the King James Bible—and particularly the chapter headings of his own composition—provide insights into the way he understood Genesis near the end of this life” (p. 23). The editors bring the Genesis manuscript into conversation with 18th-century German higher biblical critics, as well as Geddes and Paine, suggesting that Blake intentionally subverted the orthodox view of inspiration and Mosaic authorship of his time (p. 25). This perspective coincided with Blake’s interest in the original Hebrew of Genesis. The editors also discuss Blake’s relationship with his benefactor, John Linnell. They close with a detailed and technical, yet accessible, commentary on every facet of the leaves of the manuscript (pp. 31-46). For example, they comment on Blake’s mimicking of the Gothic lettering of medieval illuminated manuscripts (p. 31) and suggest that Blake’s original chapter titles betray his theological perspective on the text he copied and illuminated.

Overall, this volume is an insightful glance into Blake’s artistic method, theological outlook, and interpretive techniques. The volume is beautifully manufactured and of the highest quality. This is quite remarkable in an age when even the top academic presses utilize print-on-demand to eliminate overhead. At £55.00/$80.00, this lovely volume—its stunning life-size leaves of the actual Genesis manuscript and the well-researched scholarly essays that accompany it—is a bargain. I recommend this book for those interested in Blake or 19th-century art, the non-specialist with an interest in Blake, and for the bibliophile and book aficionado. Blake’s Genesis manuscript is a treat for both the eyes and the mind.

Garrick V. Allen is a PhD student at the University of St Andrews studying the reuse of the Hebrew Bible in the Second Temple Period. He is formerly the student pastor at Life Community Church (Kirkland, WA USA). He is a rabid follower of the Seattle Mariners and a lover of fine cheeses. He dabbles in numismatism and enjoys playing cribbage with his wife.