Set in 1950’s London, the film follows the relationship of Reynolds Woodcock, a haute couture dress designer, and Alma, a young waitress who becomes his muse and later his wife. The movie chronicles the intense, cringe-worthy, and darkly comic interplay between the two as they lunge, grip, push, pull, run, bite, repent, and wound in making a life together.

First, we have Reynolds Woodcock, played by Daniel Day-Lewis (for whom Anderson wrote the part). His hyperperfectionism and the inviolable curation of his entire life along aesthetic lines brook any interference. Apart from very brief moments of tenderness or kindness, he is an emotional citadel surrounded by passive aggressions and coolly articulated cruelties. Even his sister, his business partner with whom he is very close, enforces rather than challenges his nature, and protects him. 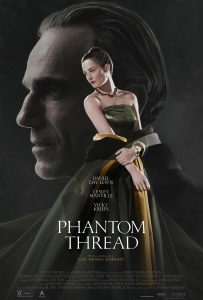 That is, until he procures Alma, played by Vicky Krieps. They meet when she serves him at a restaurant, flustered and dropping trays, and he asks her to dinner in one of the most sexually-charged scenes of someone ordering breakfast you will ever see. At first, when she moves into “The House of Woodcock,” which also functions as Reynolds’s studio, it appears Alma will suffer the same fate as all of his previous mistresses, suffocating under his heavy tempers and exacting, critical nature. It is clear that she is to be integrated into his life without changing anything about his life, like an item of clothing. She, however, is a surprise. From the very beginning, she knowingly gives him everything he asks for, supporting his genius, but without ceding the ground of her will. In one of their first interactions, flirting by a fireside, she says, in a warm, adorable voice, ‘If you want to have a staring contest with me, you will lose.’

The shocking turning point occurs when Alma has had enough and spikes his tea with some shavings of poisonous mushroom so that he will be, as she puts it, “open” and “vulnerable.” After a few days of being violently ill, incuding a hallucination of his dead mother, Reynolds emerges humbled. Under the influence of this newfound weakness, he proposes to Alma. She accepts.

After a time of healing, he begins to return to patterns of perfectionism and emotional violence, and their relationship deteriorates once more. In a final and breathtakingly perfect scene, she slowly cooks large chunks of the poisonous mushroom into an omlette. I will only reveal one thing which occurs after this. At a certain point Reynolds looks into her eyes tenderly and fiercely and says, ‘Kiss me, my girl, before I’m sick.’

One wonders, by the end, what to make of all this. (Like other Paul Thomas Anderson films, it is chock full of meaning, begging for wonder.) Is it an allegory for marriage and human intimacy? Are we one another’s salvation as much as each other’s poison? Is the end of the movie hopeful in some strange way, or purely dark?

And one wonders about the fact that “alma” means “soul.” At the beginning of Lent we hear, ‘For what does it profit a man, if he gain the whole world, yet forfeit his soul?’ Even if he loses his grip on his world, Reynolds ultimately does not choose to forfeit his relationship. But does this mean Alma functions as a type of divine retribution, giving her beloved a repeated “taste of his own medicine,” like a biblical plague, when he gets uppity and disobedient, in order to “heal” him? Is the solution weird, but also weirdly permissible?

Even in analogy, there is something irreducible and twisted at the root of this story. Perhaps that is also part of the point.

Phantom Thread is a great movie for Lent because it is twisted at the roots, self-consciously so. It is about sin and judgment: Reynolds’s cultured, gentlemanly, deadly sin and Alma’s judgment – an act of judgment which, at least temporarily, purges him.

It is about weakness – falling in love, being ill, death, susceptibility to one’s own nature and the violences of others – and it is about the controls and boundaries we create, long for, buck, and submit to, for good and for ill – and for very, very ill.

Paul Thomas Anderson and Daniel Day-Lewis both reported a sense of heaviness about filming: The character of Reynolds was a downer to inhabit. His relationship with Alma overwhelming to portray. As a gorgeously executed movie, filmed in a Georgian townhouse so overtaken by the production the actors felt suffocated by it, the film production was wrapped up in the movie’s themes. It was an intimate and difficult, at times oppressive, experience. It worked, but was extrememly taxing. The movie and its making are about the brokenness and yet desirability of art and human communion amplified to a painful degree.

But this movie may be a particularly good choice for artists and art theologians during Lent, because it is also about the limits and dangers of art, “tastefulness,” and aesthetic curation, as well as the temptations of a creator. The excuse for his soul-killing behavior toward others, the justification lodged in Reynolds’s heart, is that he is an artist. He is entirely dedicated to his vocation, and anything which breaks his concentration or dilutes the purity of that dedication must be eradicated. For Reynolds, art is not just art. Art is self-justifying. It has a life of its own, a moral weight which outweighs the heartbreak of a mistress, for example. And so, anything is permissible if it cooperates with the production of art. 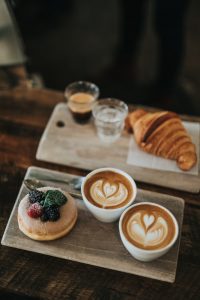 Take breakfast. Reynolds loves breakfast, and so breakfast is a highly curated affair. The correct, fresh cream. Certain buns at certain times. Lapsang souchang, just so. Mounds of sausage and bacon and Welsh rarebit, when he is in the mood for it. Would you like more porridge, my dear? But one must not scrape one’s knife too loudly against the toast! Perhaps we can see magnified in this character that sin is a slippery thing, particularly when infused by beauty. His gluttony itself involves art: aesthetics, timing, a theatre of gorgeous particulars. In spite of yourself, you feel it is nearly heaven to hear this man order his food. And yet even playing Reynolds was an experience with funereal effect.

Could there be implications, here, for liturgy? For the curation of hushed and self-serious museums?

The arts, in a sense, are morally neutral. They have no intrinsic force of their own to shape a human character or guide a human life for good or ill. A perfected craft may inspire with beauty as well as provide a medium for arrogance, self-protection, and self-indulgence. Beauty does not save the world. You can find it in a hellish House of Woodcock, too.

And how often do we ask what effect the making of art has on the artist? Is there a spiritual danger to the service of art? Day-Lewis, himself the son of a Poet Laureate, has spoken of similarity between his own father and Reynolds Woodcock, and yet quips, ‘If a poet is not self-absorbed, what else is he?’

Is Day-Lewis entirely wrong? Does he have a point? Is it true that in order to produce the books, music, poetry, films, paintings, mixed media installments, blown glass, or ballets we love, artists must put their souls – their ability to love – on the line?

Theologians and Christians artists should respond with a firm No: we are fully ourselves, fully activated as humans, to the extent that we are fully saved, sanctified, and at one with the life of God. And yet –

Phantom Thread gently, persistently presses and holds you under the surface of a paradox: it is horrible when beauty and goodness are divided, when genius casts off basic human decency; and yet they do not always, and do not necessarily, come together. To throw one’s self into a craft with absolute, even soul-defying abandon, does seem at times to produce uniquely profound or transcendent results. To eschew balance and dedicate one’s whole being to the perfection of a craft does produce, in some cases, a vision which transports. And then can that vision point to God? Or not? So when does the production and cultivation of beauty or truth cease to be beatitude? When it harms the artist?

Would you heal a misguided artist if you knew it meant sacrificing a masterpiece?

Reynolds must make dresses, it is his vocation. Yet he comes to know he needs love, too, that he wants this woman, and that he must periodically be stricken down in order to have both. If there is no lasting repentance, no (perhaps) change of heart, there is at least the acknowledgement that a limit has to be set to what he is allowed to accomplish or be in order to live a more fully human life. That may not be the case for every genius, but it is the case for him. If he is to know love, he will never fulfill his potential as an artist. And so be it. It is better than being left to his own devices. It is better than being left alone with his art.

Even Day-Lewis seems to share this intuition. Shortly after filming Phantom Thread, he announced his retirement from acting. He has cited a difficult-to-explain sense of weariness. How do art-making, dedication to craft, love, family, intimacy, and the loss or gain of one’s soul intersect? Well, for one thing, it is good to know when to stop.

0
Facebook Twitter Pinterest
LinkedIn Email
Written By
Amber Noel
More from Amber Noel
I am often bothered by the word “submission.” This can be in...
Read More