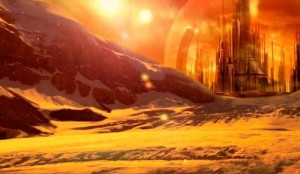 What might make a good Sabbath habit for a clergy person in front of the TV or laptop screen? And what could possibly be the relation of this habit to the service of God’s kingdom, or to the human wellness of the pastor, preacher, deacon or priest?

Here is where C.S. Lewis and his bunch would be proud (as would Russell T. Davies).

There are two consistently entertaining genres that have also offered rich fare for the theological imagination: science fiction and fantasy-adventure. I offer here only a few tried and true popcorn-munching recommendations: Battlestar Galactica, Lord of the Rings, Star Trek, the Harry Potter movies, Dr. Who – but what might clergy particularly have to gain as fans of these series?

Well, clergy need a break. Sci-fi and fantasy contain fun and easy-to-watch programming, and for those whose job it is to be the spiritually engaged shepherds of flocks, I think a little retreat to the sofa, the remote control, and a Wizengamot can, in moderation, be as okay an idea as a retreat to a remote mountain. Of course, extended daily indulgence signals a need to look seriously at whether escapist programming is becoming an actual escape, and from what (or whom). But there comes a moment when even mindful rest, itself a spiritual practice prone to performance judgment, seems a bit too intense. This does not need to mean a coma-like “switching-off,” but rather relaxation from within the matrix of the soul’s complex needs. And good sci-fi/fantasy can let them do that (with a pizza).

Clergy also get lonely, and much science fiction and fantasy focus on friendship. They have to because no one takes on Mordor alone. Starships are run by crews, where, in all the shared work, the strangest combinations of people (/Time Lords/Vulcan/Wookies) become companions. Fellowships form when there’s world-implicating work to be done, and when those involved know the seriousness and the impossibility of what they do. Witnessing real fealty played out on the stage of high adventure and high-stakes mission is not bad formation for a clergyperson, whose ministry and salvation depend on that very thing. And when ships run aground (or run a-planet, or a-nebula), loyalties break, ancient pacts are abandoned, and selfish ambitions are indulged to the ruin of the cause, that’s helpful to witness, too, because that is the drama of leadership. And the relationships that stand the test of time possess an elegance, nobility and humanity that put Meyers-Briggs predictions to shame.

Finally, clergy need fresh allegories for what they do, so as not to forget the actual scale of daily church life. When priests and pastors work to lead people through the Christian life, what are they doing? They are battling hostile alien forces. They wield magical sword and shield.  They count time in ages. They are risking it all in the woods or on the mountain, or in landing on that planet where there might be noxious fumes instead of air when the doors of the spaceship (boardroom?) open. They are joining others on a great secret mission in which someone, maybe all, may fail. They are discovering what it means to be human (hint: it’s not the brains—not exactly) and keeping it safe from greed, robots, and forgetfulness. The stakes? High. Within the vast stretches of cold, in the heated, high-stakes bursts of conflict and intimacy, among the ancient books and communications from beyond, leaders in these stories often resist their calling at first because they know enough about what they’re getting into to realize that once they say yes, it’s all in.

Clergy should watch sci-fi and fantasy because things there might look familiar, and a little fun theological work might happen. And perhaps a parish office on Monday will contain a person who, yes, has spent much of the weekend finishing season four, but who is seeing a pen, a desk chair, a musty Greek lexicon, an 11:30 appointment, a prayer, all through eyes just a bit more open, a bit more playful. The reality of what clergy and all Christians are called to is just as wild and grand as anything found in a lost galaxy.

Amber Noel received her M.Div. from Duke University in 2012 after additional graduate coursework in theology and literature at Lee University. She lives in Durham, NC (USA) where she is exploring vocations in pastoral, artistic, and academic fields, and currently works as Assistant to the Director of Duke Initiatives in Theology and the Arts. In her spare time, Amber is either pursuing ordination as a deacon, eating breakfast, or watching Doctor Who. She has high-quality humans and/or cats around her most of the time.