I love comedy.  And by ‘comedy’, I don’t mean a happy ending; I mean humour, funny, jokes, hilarity, ridiculous, etc.  If you ask me what movie or TV show I want to watch, with a few exceptions, my preference will probably include someone like Jon Stewart, Adam Sandler, Chris Farley, Jim Carrey, Jeff Daniels, Steve Carrell, and maybe even Will Farrell.  Comedies are wonderful: we laugh at them, we laugh at ourselves, we re-quote them again and again to the same effect.  I love comedy, but do I need comedy?

I suppose that ‘need’ is a rather strong word, but it is not, in this context, too strong.  Sure, I don’t need comedy to survive.  If I had to pick two things to take with me to a deserted island, one of them would not be Will Farrell’s Anchorman: The Legend of Ron Burgundy.  But perhaps I need comedy in a less severe way.  Perhaps comedy does things that I, as a Christian, consider to be a valuable component of the spiritual life.  Wait, spiritual life?  Can we talk about something so light-hearted and fun in such a serious manner? 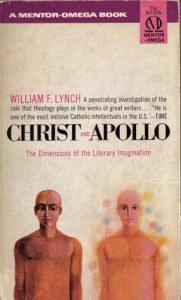 I have recently become enamored with the book Christ and Apollo (1960) by Catholic theologian and literary critic William Lynch (1908-87).  This book is an incredibly insightful, thought-provoking and wide-ranging exploration of the human imagination (or what Lynch more narrowly refers to as the ‘literary imagination’).  His main point throughout the book is the heart and centre of the imagination is the finite and particular world, into which it explores and from which it gains insight.  He makes the provocative and interesting claim, which I don’t have time to explore here, that Christianity is very valuable for our imaginative endeavours because of the value that it places on the particular.  What I do want to share with you is his suggestion that comedy is the imaginative form par excellence because it exposes, like no other form can, our concrete and finite reality.

Intuitively, I have often felt that tragedy is more important than comedy.  But, says Lynch, “the way of comedy taxes the imagination and the whole soul more than does tragedy, and requires even more courage as a way to God.  It is a more terrible way, requiring a greater ascesis, requiring more faith in the finite, the pure finite, as an entrance thereinto (129).”  But why should this be so?  Why should comedy be more terrible than tragedy?  It is because comedy grants us no self-delusions, no self-aggrandizements, and it shows us who we really are.  In short, it keeps us humble, and humility is no easy thing at all.

This is why, I think, Christians need comedy.  It confronts us with our greatest fear, the fear of being human and all the limitations that accompany such a gift.  It shapes our love for one another and for God.  It cuts through our visions of human greatness, which distort our ideas about who is worthy of our love and who is not.  It reminds us that God’s love for us is a grace, and that, even in our silliness and shame, God calls us sons and daughters.  Lynch summarizes for us:

[comedy’s] whole function is to be a perpetual and funny, if disconcerting, reminder that it is the limited concrete which is the path to insight and salvation. (133)

So, the next time you peruse some comedies on Netflix, remember: you need comedy.  Its hardly a laughing matter.

Fair Use Justification: The above image is considered to be used fairly because the post comments on Christ and Apollo.