Weaving the Word was a creative project conceived by Rev Peter Gardner, Heidi Gardner and artist Carol Marples and funded by the Church of Scotland and the Scottish Bible Society. The task was to create an artwork for the Church of Scotland ‘s Church Without Walls National Day of Celebration at the Edinburgh International Conference Centre [EICC]. The EICC is an imposing contemporary, clinical and business-like building. We wanted the artworks to infiltrate this business like space with sense, spirituality, thoughtfulness, creativity and fun while offering a visual alternative to the dominant spoken word of the conference environment and of the Church of Scotland itself! It was about making the Word visual!

Conference centres often pose more limitations than churches to the artist, so having discovered our boundaries, the task was to be creative within them and potentially push them to their limits.

It was important to us that this should be a project by the people for the people; it would enable those who weren’t able to attend the actual conference day to share in the preparations, contribute, and be part of the day. Seven workshop days were set up around Scotland. These were based in churches but open to anyone and involved all ages.

“Weaving the Word” into the space was our aim and our theme. Four installations were created; a 16M x7M woven hanging in the entrance hall; 200 chair backs for the main lecture and worship space; 30 pillars were wrapped with selected banners of Bible pages; a number of everyday objects wrapped with the printed Word were placed around the centre to be discovered. The idea was to explore the Word: in the everyday, in the ordinary, being shelter, being rest, in and through all things. The bible was our medium for creativity. 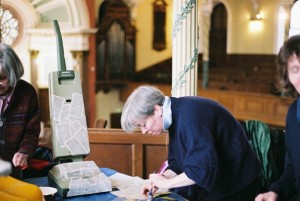 To source enough bibles for the artwork a communication was put out throughout the Church of Scotland telling people about the project and asking for unwanted  and disused Bibles. The response was over whelming, it seemed as though we had a given people a legitimate way of getting rid of something too precious just to throw away. Throughout the workshops we encountered stories of “a Bible couldn’t be just discarded but had to be burned, or buried”  – it became clear that the Bible as a physical object had a meaning of it’s own. We received Bibles of all translations and kinds: from aged declamatory church Bibles, to family Bibles and gift baptismal Bibles, and even some in Gallic.

Many people who came to the workshops were nervous about using the Bible pages as creative media; “Was this ok? Was this the right thing to do with a Bible?” The hardest thing for many was breaking the spine of the bible to release the pages so that they could be used. This in part because it was the Bible and the breaking was the first step in destruction, but also because it was a book and it’s not what we do with books.

Interestingly, no one person felt they couldn’t do it, though many conversations were opened up as to what the Bible means to us as an object, as a sacred object: is it just a book of printed pages or does something happen when all these pages create a Christian book of the Word, and what is happening when we take it apart? In fact, I found myself interviewed on Christian radio being asked to defend the tearing up of bibles to create art!

What do you think about the re-purposing of Bibles for the sake of art?

Carol Marples is the creative director and artist for the Soul Marks Trust, which was established in 2003 to “encourage and enable creativity using all the senses, particularly through the visual arts, to express and inspire faith in God.” Carol has been involved in creating visuals for worship, setting up quiet spaces, and leading workshops throughout Scotland and other parts of the world for the past 20 years. See www.soulmarks.co.uk for more information.