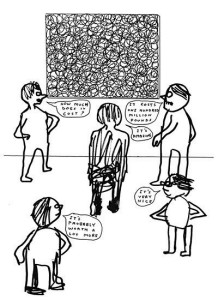 You may have noticed that The Gospel Coalition has recently produced videos and blog posts that explore the relationship between Christianity and the arts. For an evangelical Christian who loves the arts, I am encouraged to see some evangelical leaders taking the arts seriously.

John Starke has written just such a blog post, titled “Bad Art Doesn’t Exist Apart from the Good.”  There is a lot to admire about this post. Starke engages with a contemporary artist named David Shirgley (see right). He attempts a theological critique of Shirgley’s work by drawing upon Andy Crouch’s recent work, Culture Making (IVP 2008). Quite simply, Starke judges that Shirgley’s art is bad because he deliberately uses poor technique, and this does violence to the imago Dei. Human beings image God by making well-crafted culture and not by making crappy culture. I couldn’t agree more.

In several ways, however, Starke’s critique misfires. I have no need to defend Shirgley’s art, but, evangelicals, we can do better. I want to propose three ways that Starke’s critique, as well as conversations between evangelicals and the arts more generally, could be improved.  In a nutshell, I think we could be more attentive, more informed and slower to judge.

First, take a more open and attentive posture to the artist’s work.  Starke’s engagement with Shirgley’s drawings is almost entirely negative.  Although he recognizes the humorous quality of Shirgley’s work, Starke concludes that Shirgley has “…menacing motives. This is his underlying message: I could do some good art here, but I won’t, and you’ll like it.”  This is quite an accusation to level at someone. Rather than writing off an artist’s work as simply “menacing,” it might also be helpful to point to some positive aspects of an artist’s work.  For example, one could point out that Shirgley’s drawings represent human self-doubt and insecurity particularly well.

Second, take the time to be more informed about contemporary art. The central problem with John Starke’s critique is that he assumes Shirgley is a “modern artist.” It makes more sense to label him as a post-modern artist because Shirgley’s work is clearly shaped by developments in a post-Marcel Duchamp art world. Yes, Duchamp is that guy who put a toilet in an art gallery. He and other artists ushered in a form of art often called ‘conceptual art.’ Unlike traditional forms of art, the conceptual artist is more concerned with inducing self-reflection in the viewer than he is in crafting a physical object. This self-reflection could be, as it is in the cause of Duchamp’s toilet, a questioning of one’s assumed definition of art. In the case of Shirgley’s art, as Starke does note, one begins to question one’s assumptions about what it means to be human, and what it means to be an artist.

Third, don’t assume that you (and all of your readers) have a clear idea of what good art is. Now, I’m not saying that there is no such thing as good and bad art. But if one is going to judge that someone’s art is bad, then this judgment needs to be won with sweat and toil. If nothing else, more attention needs to be paid to Shirgley’s work than Starke gives it.

I offer these three suggestions not simply to Starke, but also to the wider evangelical community. The relationship between evangelicals and art would be much improved if evangelicals were more attentive, more informed and slower to judge.

Image used with permission from the artist.

Editor’s Note: This is the second installment of a four-part series by Jim McCullough that will look at the ways in which art contributes…