Editor’s Note: For our fourth Advent reflection on Malcolm Guite’s, Waiting on the Word (Canterbury Press, 2015), Reviews Editor Karen McClain Kiefer reflects upon Richard Bauckham’s ‘Song of the Shepherds’ and the importance of reflection after Christmas and the New Year.

Song of the Shepherds Richard Bauckham

We were familiar with the night.
We knew its favourite colours,
its sullen silence
and its small, disturbing sounds,
its unprovoked rages,
its savage dreams.

We slept by turns,
attentive to the flock.
We said little.
Night after night, there was little to say.
But sometimes one of us,
skilled in that way,
would pipe a tune of how things were for us.

They say that once, almost before time,
the stars with shining voices
serenaded
the new born world.
The night could not contain their boundless praise.

We thought that just a poem —
until the night
a song of solar glory,
unutterable, unearthly,
eclipsed the luminaries of the night,
as though the world were exorcised of dark
and, coming to itself, began again.

Later we returned to the flock.
The night was ominously black.
The stars were silent as the sheep.
Nights pass, year on year.
We clutch our meagre cloaks against the cold.
Our aging piper’s fumbling fingers play,
night after night,
an earthly echo of the song that banished dark.
It has stayed with us.

Since the day my father brought me to the nativity in our church on Christmas Eve when I was four years old, I have been captivated by the idea of a God who fully and humbly enters humanity.

Even at that age while I anticipated the coming of Christmas with all the wondrous expectations of a child that accompanied it, I also sensed in that Advent season that my life was relevant within the cosmos, as was all of humankind. Although I did not hear until many years later the word, ‘incarnation’, I had an underlying understanding, appreciation and awe of a God who is at once both wholly present and wholly other. I came to see the Incarnation as making the human story, and therefore my particular story, relevant as part of a divine, universal story.

It is this connection to human, particular stories that draws my interest to the shepherds in the field on that most Holy Night, and to Richard Bauckham’s Song of the Shepherds. Bringing the shepherds to light in the brilliantly simple and lyrical way that he does in this poem allows us to enter from a familiar and ordinary human, particular perspective into the universal drama of a God who so loved the world that he entered and dwelled with it – as Emmanuel, ‘God with us’.

Since that first memory of the nativity scene with my father, each year during the Advent season I have remained in awe of the inbreaking of the divine into our earthly world and God’s dwelling with us. This idea, more than the image of a baby in a manger, has captivated me during the season in which we are instructed to prepare, in patient waiting, for the coming of Christ – the already-but-not-yet of the eschatological promise of the New Creation and our eternal dwelling with the divine. The shepherds in the field that Christmas night exemplify the paradox of the Incarnation and that patient waiting.

Perhaps no other poem in Malcolm Guite’s deftly selected anthology more wholly and literally embodies the idea of ‘Waiting on the Word’ than this poem by Bauckham. ‘Waiting’ necessarily implies something worth waiting for, and Bauckham shows us that we may not even be aware of that waiting or our expectancy. For, although when we encounter the poem’s protagonists they are simply going about their unspectacular business of shepherding as on any other ordinary night, we are immediately drawn into the subconscious expectancy of the anything-but-ordinary. Some truth beyond our immediate awareness that, while it may astonish us, on some level we find we are not surprised – we suddenly realise it is what we have been formed and ‘prepared’ for. Indeed, everything about that night was ordinary, save for the heavenly interruption and the visit it prompted to a lowly birthplace in Bethlehem. Even the time that followed was seemingly ordinary, an echo of the pre-celestial visitation as Guite notes in Bauckham’s poem which ‘bookends’ this ordinariness in its first and last stanzas:

From the first two stanzas:

We were familiar with the night.
. . .
Night after night, there was little to say

From the last stanza:

Later we returned to the flock.
The night was ominously black.
The stars were silent as the sheep.
Nights pass, year on year.

The shepherds return to their ordinary existence. Yet, what fills the interlude between these bookend passages alters the poem, and human existence, for all time.

Bauckham’s poem, Luke’s passage (2:8-20), the hauntingly beautiful carol, O Holy Night, as well as my own Advent memories reveal a universal understanding of this far greater and forever-altering event, an understanding which provides guidance in the ‘now-whatness’ of our post-Christmas existence.

In Luke, we do not get a detailed account of the shepherds returning to their flocks and their lives. We do, however, glimpse their transformation from the events that transpired, from the ‘thing’ (rhema) that is the Incarnation as proclaimed, the birth of Jesus, Emmanuel. The proclamation delivered by the angels prompted immediate response by the shepherds:

When the angels had left them and gone into heaven, the shepherds said to one another, ‘Let us go now to Bethlehem and see this thing that has taken place, which the Lord has made known to us’ [Lk 2:15].

Upon seeing the babe, they then bore public witness, impacting all who heard it, including Mary and Joseph themselves who had received similar proclamation:

So they went with haste and found Mary and Joseph, and the child lying in the manger. When they saw this, they made known what had been told them about this child; and all who heard it were amazed at what the shepherds told them. But Mary treasured all these words and pondered them in her heart. The shepherds returned, glorifying and praising God for all they had heard and seen, as it had been told them [Lk 16-20].

These lowly shepherds, social and cultural outcasts, were selected for this knowledge, experience and witness. In the proclamation and their response, they were transformed. In their witness of the same, they profoundly impacted others. The last we see of them in Luke’s account is their return to their flocks – a bookend of sorts if the passage were ended at the comma. 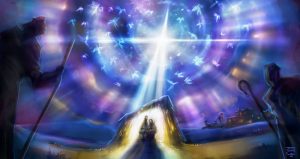 But in the remnant of verse twenty, we see anything but an identical state of affairs to what existed prior to the angelic proclamation. Amid returning to their unchanged, familiar duties, the shepherds themselves were transformed – they were glorifying and praising God. Their unaware, expectant hearts were now overflowing with the joy of a gift beyond their expectations. Notably, Mary, too, was significantly impacted, treasuring these words and pondering them in her heart, which likely was filled beyond measure and would later be pierced beyond comprehension.

Guite illuminates that the heart of Song of the Shepherds is precisely the time we can linger in the (perhaps unbeknownst to us) waiting with the shepherds, as ‘Bauckham does not rush to the moment of revelation’ [105]. Yet this ‘new’ song ‘eclipsed the luminaries of the night’ evoking a sense that this singular song on this singular evening proclaimed a singular event in the cosmos which would forever change it.

Juxtaposed with the patient waiting of the shepherds, this inbreaking is felt all the more deeply, and brings to mind the declaration from another familiar song, ‘the soul felt its worth’.[1] On this Holy Night the weary souls of the shepherds did rejoice – in what would forever echo after that night as the thrill of hope that the doxastic announcement heralded.

Guite’s selection of 26th December for Song of the Shepherds is as telling as the poem, for, in our time, it is a day of post-culmination. The anticipation of the ‘Holy Night’ and Christmas morn with all its trimmings and excitement has been met and perhaps exceeded.

Presents have been given, carnage of wrappings binned, feasts prepared and consumed, even dishes washed. This day-after-Christmas marks the ‘what’s next’ of the holiday time – a kind of suspension of time for many – before the excitement and inevitable launch of the new year and all the resolutions and expectations that it brings.

In truth, for many who have a holiday from work or studies during this time, the launch of the new year may quickly fade into the resumption of these duties, just as in the account of the shepherds. This resumption may seem both comforting and disappointing in its familiarity, as our return to duties so often falls short of expectations for a new beginning or transformation.

However, in the brief span of time in the remaining days of Christmas, we have a second opportunity for reflection, a second chance for Advent-like awareness and anticipation amidst the joy and celebration of the season. Having experienced the proclamation of ‘this thing’ – the indwelling Emmanuel – once again this year, we too can respond as the shepherds did, and in our own response find the glory, joy and promise of the season worth waiting for. . . and foster that hope for others. Bauckham, with his song of shepherds, draws our attention to this opportunity, ever so subtly but unmistakably. May it stay with us.

[1] Lyrics from O Holy Night, Adolphe Adam, 1847: ‘Long lay the world in sin and error pining; Till he appeared and the soul felt its worth; A thrill of hope the weary soul rejoices…’