I would like to propose a question. If we refer to a character in film or literature that in some way represents Christ as a “Christ-figure,” is it possible to find a character who represents the Holy Spirit?

If there were such a human likeness to the Spirit, we might expect to recognize in that likeness the acts and influence which draw Christ’s own holy disruption into the middle of human life: opening possibilities, transforming that which Christ has redeemed and loved, and exposing and conflicting with that which would hinder the transformation. A Holy Spirit figure would be one who, by her or his presence in an environment, calls forth and fulfills the potential opened up in Christ: breaking lifeless patterns, empowering the humble, restoring sanity, and causing the best kinds of mischief—in short, one who brings signs of the Kingdom of God.

I don’t ask this in abstract. I ask it because it occurred to me, while watching David Lean’s 1954 film Hobson’s Choice, that this is exactly what I might have been witnessing.

Hobson’s Choice is delightful—a wonderful story about choosing and being chosen, and about the holy havoc a bond of love can wreak. For its powerful, loving, sanctifying force, I propose Maggie Hobson. Maggie, an energetic 19th-century Salford spinster, suddenly chooses a mate. To her family’s chagrin, it is her father’s shop shoemaker, Will, an unlikely bloke whom Maggie nonetheless pursues with an unflagging determination, to woo him into accepting his vocation as a gifted craftsman. (Will finds out about this goal long after she’s already decided it.) She sees his potential and initiates the transformative relationship she’s convinced will bring him to fulfill it: union with herself, a savvy businesswoman. At no point does her love for Will (or for any of her petulant and protesting family members) depend on reciprocation; rather, her love elicits Will’s love, through her unwavering dedication to his wellbeing. 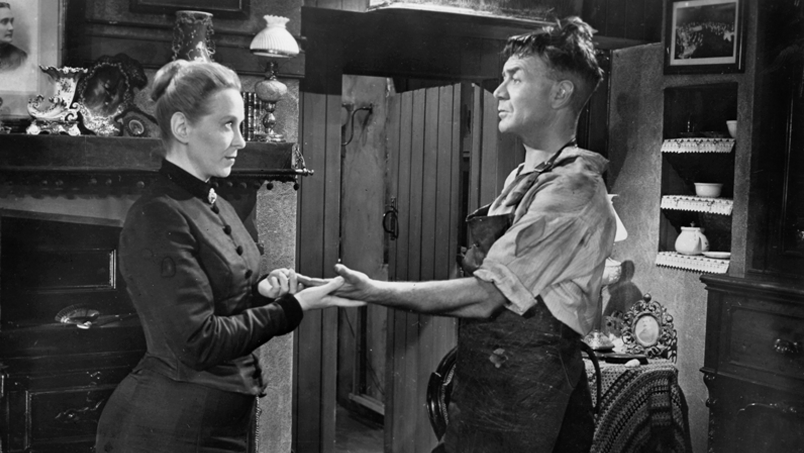 This is no softsoap affection, either. It’s charged with power, and admits no bluffs or second-best: when Maggie finds that Will has a girlfriend who’s taking him nowhere but who he believes he “loves,” she promptly removes him from his false, silly love by storming into his girlfriend’s house and going toe-to-toe with the girl’s large and raging mother.

Maggie is both forceful and chaste, and has increasingly cleansing effects on any environment which will allow her even an inch to work. Under the influence of her stern cheerfulness, mighty good sense, and even (it’s tastefully indicated) her bed, Will comes alive to the world. They open a shoe shop together, he learns business and she increasingly gives him the strength, confidence, and pluck to really exist, to make beautiful shoes, to open to and care for others. There are moments in the movie when the cinematography seems to gently associate her with light and fire—though it’s always light in a home, fire in a hearth. But perhaps that qualification suggests a proper limit to what we might venture to call a “Holy Spirit-figure”: the Spirit is radically renewing, while also bringing order to the daily things of flesh.

Maggie’s force at times risks being pushy. But it is difficult to see her as a bully—she simply anticipates good ends before others do, and begins bringing them about before those around her know quite yet what is happening. We see the fruit of her presence at the end: forgiveness, and the creation of a collaborative, creative, and lifegiving partnership between herself and the humble Will. That the creative life of this partnership is exasperating only to the unrepentant and humorless characters in the film, I leave to speak for itself.

I don’t propose in this idea that we seek to see clearly exactly who the Holy Spirit is. We can see what the Holy Spirit does; but maybe, if we look carefully and creatively enough, we may also see something of the Spirit’s personality, and how circumstances behave when this personality whisks into a room, even with petticoats and a bustle whisking along behind.

Amber Noel received her M.Div. from Duke University in 2012, after some additional graduate coursework in theology and literature at Lee University (Cleveland, TN).  She has remained in Durham, NC to explore vocations in pastoral, artistic, and academic fields. She currently works as a writer, youth minister, and an administrative assistant for Duke Initiatives in Theology and the Arts. But more importantly, she has good people and animals around who stubbornly insist on being her friends.

Image credit: Still from Hobson’s Choice (1954), used for purposes of comment under fair use. (Source)

Amber Noel Amber Noel received her M.Div. from Duke University in 2012 after additional graduate coursework in theology and literature, but she does not yet need glasses. She's worked as a teacher, writer, youth minister, and party-thrower, and lives in Dallas, Texas, where she pulls together various combinations of pastoral and creative shenanigans for the good of the church. She adores hot yoga, dubstep, and bedtime snacks, as well as spending time with fine humans and animals.

‘They [Angus and his dog, Cyril] had now come up to the traffic lights at the Open Eye Gallery, and this was the signal…