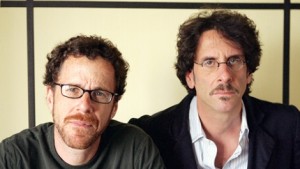 Editor’s Note: In this 2-part series, Jesse Nickel considers violence in the films of the Coen Brothers. The second part will post on Tuesday 11 February.

Over the course of the past three decades, filmmakers Joel and Ethan Coen have become established amongst Hollywood’s elite. The success of their films is demonstrated not only at the box office , but also by their widespread critical acclaim (most notably, their films have won six Academy Awards, including best director and best picture for 2007’s No Country for Old Men).

One of the qualities for which the films of the Coen brothers have come to be known is their distinctive portrayal of violence. A quick online search for “Coen brothers and violence” results in a multitude of film-critic commentary, referring to the Coen’s use of “stylized violence” as a theme,[1] their “virtuosic and almost poetic portrayals of violence,”[2] and the way in which their films are “often characterized by … violence that startles.”[3] So prevalent has this topic been within the discussion of the Coens’ filmography that a whole book has been written on it: Ryan P. Doom’s The Brothers Coen: Unique Characters of Violence (ABC-CLIO, 2009). In the book’s introduction, Doom argues that the Coens’ “use of vehement brutality made their work distinctive … [their] presentation of savage activity is ceaseless.”[4] The Coen brothers’ films are undoubtedly violent – they all involve, in some form, characters inflicting bodily harm upon others. In and of itself, however, this fact should not be enough to make them stand out; violence, after all, is far from uncommon when it comes to Hollywood. Why, then, have the Coen brothers become so notorious in this regard? What makes the violence in their films so remarkable?

The Coen brothers’ portrayals of violence stand out precisely because they are unique and, therefore, memorable. In their films, we do not encounter the “entertaining” violence of an Arnold Schwarzenegger or Sylvester Stallone action flick; nor the gratuitous, salacious bloodshed of a slasher movie like Friday the 13th; nor the dehumanizing terror of the violence of warfare, depicted in films like Platoon or the opening scene of Saving Private Ryan. In the first two examples of violence in film, death, mayhem, sadistic brutality, and psychopathic murder are utilized for their entertainment value (which, if we’re honest with ourselves, should raise some questions for those of us who are the consumers of such entertainment … but that’s an issue for another article!); in the third, the violence is in some sense environmental, since injury and death are inseparable from the reality of war. The violence portrayed in the films of the Coen brothers does not quite fit into any of these categories. It is graphic, but not gratuitous; definitive, but not explicit; brutal, but not horror-movie-scream-inducing. Perhaps its most distinctive characteristic is its unexpected and instantaneous portrayal, shocking the viewer, and leaving him/her reeling with the graphic brutality they have just witnessed. Violent acts are not drawn out. When they happen, they happen quickly and matter-of-factly; before the viewer knows what is happening, it’s all over – leaving the characters to deal with the devastating consequences of their actions.

In this way, the Coen brothers’ use of violence is integrally related to the stark portrayal of reality which is so definitive of their filmography. The Coens depict the world in all its brokenness. Though they may indulge in the creation of eccentric characters who contribute to the characteristically black humour of their films, the world in which these characters exist is not at all fantastical. Violence is a part of the real world, as seen through the Coens’ eyes. The violence is real – blood flows, and people die – and the Coens do not shy away from portraying it in ways that are shocking, that grab the viewer’s attention. Significantly, however, it is never glorified, never exalted; it is never lauded nor praised. Rather, by means of its realistic starkness and consequent shocking brutality, the Coens’ violence is enabled to have the effect it should: to appropriately disgust and disturb the viewer who witnesses it.

Moreover, the Coen brothers never portray violence extraneous to the stories they are telling. As Robert K. Johnson states, their “violence is unflinchingly, yet appropriately portrayed.”[5] Within the stories they tell, characters find themselves in situations – whether as a result of their own actions or not – where their hands are forced. Often, violence follows as a consequence of previous poor choices; choices made on the basis of greed or ambition. As Doom notes in his introduction, in the story-telling of the Coens “violence becomes a necessary human reaction” to events.[6]