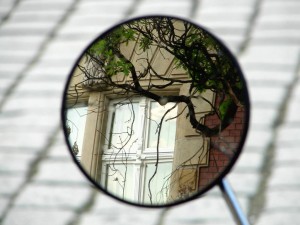 Sitting in Haché Gourmet Burgers restaurant last night in Copenhagen, I found myself gazing into an enormous wall-covering mirror and seeing the world around me in reflection. In a way, looking through this glass at my surroundings struck me as easier and less invasive than observing the place directly. I suppose, on reflection, this was a function of the sense of safety one gets from looking in a mirror and seeing the world as a spectator rather than as a participant.

Copenhagen may inspire reflection on reflection. Soren Kierkegaard, who called Copenhagen home, reflected on reflection by writing pseudonymously. In spite of these pseudonyms, many readers assumed he shared the views of the characters under whose names he wrote. This was not necessarily the case, nor was it his intent. As Prof. James Rovira writes in his recent book Kierkegaard and Blake: ‘He did not intend his pseudonymous authorship to speak on his behalf, but rather to reveal the type of personality who would conceive of these ideas. Kierkegaard wanted his readers to understand that the pseudonyms are characters he created and that their books are works written by these characters.’[1]

Kierkegaard created characters in order to enflesh some of the most prominent ideologies of his day. His hope was that, by indirectly communicating these things through pseudonyms, he (as Kierkegaard) could step aside and stir his readers to reflect on their lives and the ideologies that informed the way they lived them. In other words, according to Rovira, it ‘is not what we see of Kierkegaard in his work that is important, but what we see of ourselves in reaction to his works.’[2]

In an attempt to distance himself from his characters Kierkegaard wrote: ‘I have no opinion about [the characters] except as a reader, not the remotest private relation to them, since it is impossible to have that to a doubly reflected communication.’[3] By claiming a ‘doubly reflected communication’, Kierkegaard professed to be two steps removed from the written thoughts of his characters because those thoughts were generated by the characters he created—characters he saw as neither equal to himself, nor who necessarily shared his thoughts. But was he really as far removed from and unaffected by his characters as he claimed?

It seems to me an answer might lie in examining a parallel between Kierkegaard’s taking on characters in his writing and actors taking on roles for the stage. Some, like theatre director Jerzy Grotowski, see the act of taking on a role as having the potential to reveal true things to those who take on the roles. In Grotowski’s opinion, the ‘important thing is to use the role as a trampolin, an instrument with which to study what is hidden behind our everyday mask. . .’[4] When this act is performed faithfully, Grotowski believes the effect of the unmasking can spill over to the spectator and serve as ‘an invitation to him [the spectator] to do the same thing’.[5]

If this parallel is well-founded and if Grotowski’s contention is true, is it possible that, through the reflective act of inhabiting various characters in Kierkegaard’s writing, true things were revealed not only to his readers but also to himself?  If so, might Christians be able to approach the practice of creating characters, whether through writing or by acting, as a spiritual discipline with the hope that God might enable us, through reflection, to see more clearly in the mirror which is still quite dim?

Before making his way to St Andrews, Dave played the part of a peasant and a street sweep at a Renaissance Festival and Walt Disney World respectively. However, his interest in performance and communication were also put to use for over a decade as a corporate communications trainer in Charlotte, NC where he and his wife, Carrie, lived before moving overseas. Since then, they’ve welcomed their daughters Molly and Abigail into the world and Dave completed his M.Litt in Theology, Imagination, and the Arts at St Andrews. At the moment he’s busy researching the theological significance of embodied expression in pursuit of a PhD from St Andrews.

Alissa Wilkinson and Robert Joustra. How to Survive the Apocalypse: Zombies, Cylons, Faith, and Politics at the End of the World. Eerdmans, Grand Rapids,…