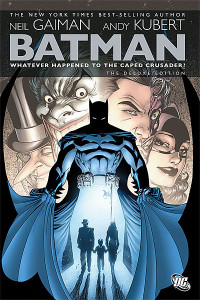 Superheroes are often re-born in different incarnations. A writer will start the storyline afresh and a new version of the hero will be born. Neil Gaiman’s award-winning story Whatever Happened to the Caped Crusader? (2009) coalesces previous Batman incarnations, focusing on the end–Batman’s funeral. Two off-sight narrators, Batman and a woman, watch as various friends and fiends tell their versions of the Dark Knight’s last adventure. Two full versions make up the majority of the novel, with fragmentary accounts throughout. In the end, Batman is literally re-born, made again to be the dark hero, fighting to right the death of his parents.

The two main accounts of Batman’s death, “The Catwoman’s Tale” and “The Gentleman Gentleman’s Tale,” are vastly different. Catwoman weaves a tale of flirtation, sexual attraction, and attempted reform all to win the love of Batman. In the end, she allows Batman to die after seeking her help all because he loves The City, Gotham, more than he loves her. Alfred, the stalwart butler, recounts a tale of a hidden villainous identity all performed for a depressed and needy Bruce Wayne, desperate to play the hero for The City. Alfred and his friends, members of a group of traveling actors, made up the gang of criminals that plagued Batman for years. In the end, these created identities are what kill the disenchanted Batman.

The disembodied Batman, narrating events for the reader, doesn’t seem to remember exactly what happened, but protests the accuracy of these accounts. The reader never finds out precisely what has happened, but then, Gaiman isn’t too concerned with recounting “true events.” As in his other writings, such as his well-known comic series The Sandman, Gaiman asks his reader to engage not with the truth of events but belief in the symbol behind the events. Discovering the truth behind Batman’s life and death as a superhero is immaterial to the novel’s message. Instead, what matters is that those around him believed in him as the symbolic and defining ideal of what they themselves need, be it friend or enemy. Belief, then, is what is vitally important, not the existence or discovery of truth.

It is perhaps because of this belief that Batman comes to function simultaneously as the symbol for The City as well as what sustains the community that is The City. Each character who speaks at Batman’s funeral, from the faithful sidekick Robin to the weepy Swamp Thing, define themselves in relation to Batman and his actions. A cop even declares, “He was the city.” Now that Batman has died, Crime Alley begins to return to its original dilapidated state, just as Batman’s body is decaying in the casket. Catwoman decries his love for The City, saying, “I get it. You’re married to the city. You’re going to stop bad people doing bad things if it kills you.” He is all of the members of the community that make up Gotham, yet at the same time, he is separate from them because he finds that “everyone is worthy” to be saved from evil. Batman, in standing between “the worst of them and the city,” creates a community that encompasses both the good and the bad.

When his dead mother asks what he has learned from attending his own funeral, Batman answers that his life purpose was (and will be) to “protect the city. I rescue people . . . I guard the innocent. I correct the guilty.” Even in the guilty, Batman sees room for redemption. He “corrects,” implying a hope for a better future.  The City comes with its good and its bad, its wanted and its forgotten. Ultimately it needs Someone who will sacrifice to keep it whole, to make it better, and to give its members something to rally around and live for. For Gaiman, the symbol of Batman must always be reborn so that the community, The City, will remain whole and striving for good. Gaiman’s Batman, because he is flawed and imperfect, is trapped in a never-ending cycle of struggle and sacrifice, striving to sustain this group of people who he hopes will be better because of his life and death.

While not reading comic books, Katherine R. Cooper is a PhD candidate at the University of St Andrews. Her dissertation focuses on the body in sixteenth-century literature based on the Penitential Psalms. In between writing about sonnets and Foxe’s Book of Martyrs, she enjoys trying out new recipes for her friends and going to a ceilidh or two.

Image credit Fair use is justified because the author comments upon Whatever Happened to the Caped Crusader?

While not reading comic books, Katherine R. Cooper is a PhD candidate at the University of St Andrews. Her dissertation focuses on the body in sixteenth-century literature based on the Penitential Psalms. In between writing about sonnets and Foxe’s Book of Martyrs, she enjoys trying out new recipes for her friends and going to a ceilidh or two.