Editors Note:  ITIA co-founder, Professor Jeremy Begbie, offers a poignant tribute to the life and work of Dr Roger Lundin (1949-2015), former Professor of English and Arthur F. Holmes Professor of Faith and Learning at Wheaton College (ILL).  Professor Lundin was series editor of the Ashgate Studies in Theology, Imagination and the Arts (alongside Jeremy Begbie and Trevor A Hart) and provided a significant contribution toward the advancement of studies considering the interface between theology and the arts.  Transpositions would like to thank The Conference on Christianity and Literature for granting permission to publish this tribute.

Address delivered at the Conference on Christianity and Literature Luncheon on January 8th, 2016

I count it a huge honor to be invited to offer a tribute to my friend Roger Lundin for The Conference on Christianity and Literature, a body he often mentioned to me with great warmth. It is certainly an intimidating brief: to address a group whose core interest is effective language, and to try to honor in words someone whose verbal eloquence vastly exceeded my own.

But Roger was not one who would have wanted anyone to be daunted in his presence. And therein lies a paradox, and one worth pondering. It is almost impossible not to use the word ‘large’ when thinking of Roger. His physical height alone was impressive enough. I used to call him ‘The Big Swede’, for which he rewarded me with the title ‘The Little Brit’. And he could have easily used that imposing stature to demean or put down. But of course he never did. Quite the opposite – he never dominated, overwhelmed or belittled; he enlarged you, generously expanded your sense of self-worth. His quiet tone, his genial patience with whomever he met, the way he could make your feeblest ideas flower – it was all part of the same theme. His largeness always came with largesse.

And then there was his learning – also massive. His command of literature encompassed a teeming variety of authors. In conversation he would frequently slip into quotation – from sonnets and epics, complex verse and dense prose. I remember the way he used to pace a lecture room, energetically drawing in writer after writer. It was impossible to be bored or to lose concentration. Hermeneutical theory, modern theology, nineteenth-century American poetry, not to mention talk-shows, basketball and Bob Dylan – they all found a place in the intellectual drama. But again, formidable as all this was on one level, it never generated that crushing sense of inadequacy that scholars love to inflict on the academically challenged – rather, you felt welcomed into rooms of culture you never would have explored on your own, and found connecting corridors you could never have foreseen. He was never out to intimidate, only invite you to explore the vast mansions he’d lived in for years. Largeness with largesse.

His own intellectual passions were similarly expansive. More than anything else he was fascinated by the deep-running currents of thought that have shaped what we have come to call modernity. In particular, he wrestled with the possibility of belief, or, as he put it, how we might ‘believe again’ in a culture where the soil which was once so richly nourished Christian belief had turned barren. Although convinced that the scope of Christian truth knew no bounds, he never responded to the questions of the agnostic or atheist with simple or monolithic answers. For Roger the Gospel was never to be used as a weapon to silence all unbelief with overpowering force. By its very nature it called for a different strategy, shaped above all by Calvary and Easter, by God’s descent into the very worst to secure for us the very best. Hence his repeated insistence that the path to joy passes through death, the very particular death of Jesus. Hence his implacable opposition to all sentimentality, nurtured especially by a profound engagement with the likes of Dostoyevsky and Barth. Hence his belief that life’s deepest questions could never be answered in slick sound-bites, but only by returning again and again to Golgotha, and in the context of a kind of patient love with each other that echoes what happened there. He himself had known pain in his life and had been met by God in that pain, and this gave him an unusual sensitivity to those in the valley of the shadow of death. It was the largeness of the Gospel that gave him his largesse with others.

And so we are speaking of a man who never diminished you but always enlarged, always expanded your perception of the Good News and your place in it. For me, and for many of you no doubt, it was his vision for literature and the arts that was especially enlarging.  I first came to know Roger in the late 1990s just after reading his book The Culture of Interpretation, which so eloquently exposed the theological pathologies of modernity.

Of course, he knew well the grand narratives offered by, for example, Charles Taylor and others. But he felt that many of these stories had over-valued some disciplines at the expense of others. History, philosophy, politics, economics, social theory – they all figured prominently. But what of the arts? The arts were all too often pulled in merely as handy illustrations, glitter to brighten up otherwise grey prose.

Roger showed that literature (and literary theory) bore its own irreducible testimony to the spiritual forces that have made our culture what it is, and that there was nothing at all odd about interlacing the texts of modern theology with extended reflections on Melville, Dickinson, Auden, Miłosz and the rest. He believed these writers were theological voices in their own right. 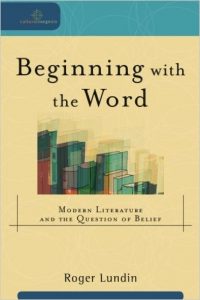 Of course, he was well aware that the world of literary studies had been exposed to gales of cultural criticism that swept the humanities during his career, storms that made any direct appeal to a Christian perspective hard to maintain. Like most professors of his generation, he was well versed in the manoeuvres of ideological suspicion, the pressure to unmask even the tiniest micro-aggressions in the most innocuous-sounding discourse, the compulsion to maintain a constant ironic distance lest we imagine we can wrap our epistemological fingers neatly around reality. Roger knew these strategies inside and out, and he took them seriously. Indeed, he could expound them powerfully (with a mischievous twinkle in his eye). But he was convinced they needed a counterweight, a form of writing that engaged them while not succumbing to their self-destructive drive. To believe that the only meaning this world possesses is the meaning we give it – this he knew led to shrunken and fruitless forms of life. In response, Roger offered not a theory or program, but a vision of this physical world we inhabit as ‘there before us’, a world we did not make but which had been given simply out of the goodness of the one who made it, a world intended to be our felicitous home. This outlook, Roger believed, could give rise to what Richard Hays has called ‘a hermeneutics of trust’, or, in Roger’s words, an attitude where ‘the objects of my affection are as vital as the instruments of my perception’. It is this positive view of the material world as a product of the love of God, and the intended environment for human making, that gives Roger’s cultural commentary an entirely different flavor from the closed circles of irony and parody that so easily pass for critique today. He could diagnose the pathologies and distortions of modernity with surgical skill, certainly, but it was always surgery for healing, for repairing the rift between word and world, and thus for the nourishment of a culture for which he cared so deeply.

A final comment. At the outset, I alluded to Roger’s facility for words. He cared about words – or better put, he cared for people through words: his students, colleagues and readers. That was why he labored so hard to find the right ones. That was why – with that memorable sidelong glance – he paused so often in conversation. That is why he spent hours and hours revising and re-editing his essays and books. In all the years I knew Roger I can honestly say I never remember him using words carelessly. He knew that careless words could hurt, maim and wound. In a culture deluged with half-thought out words, sloppy, hollowed-out language, he saw it as his calling to hone words full of care for others, full of the winsome generosity of God. And in the corridors of the academy, few things are needed more today. We academics revel in large words – to impress, to intimidate. He inspired us to use words with largesse. And that is a legacy beyond measure.

This tribute was posted originally at The Conference for Christianity and Literature, here.

Regent College shot a promotional video for Roger Lundin’s course on modern literature a few months before his unexpected passing.  The video can be viewed here.

A further tribute by his friend and colleague, Jeff Barbeau, can be viewed here.

0
Facebook Twitter Pinterest
LinkedIn Email
Written By
Jeremy Begbie
More from Jeremy Begbie
Amid the expanding bustle between theology and the arts, the topic of...
Read More