[EDITOR’S NOTE: Transpositions celebrates 10 years!  Over the next three weeks, Joel Mayward will highlight reflections by artists and scholars on art from the past decade.]

Twenty years ago, in 2000, University of St Andrews Divinity Professor Trevor Hart collaborated with his Cambridge colleague, Jeremy Begbie, to begin a new institute focused on bringing the arts and the human imagination into constructive conversation with Christian theology. Ten years later, a group of students at the institute they founded, the Institute for Theology, Imagination and the Arts (ITIA), established an online blog with the intention of bringing the scholarly conversation to the wider world. The result was Transpositions, which later evolved from the status of ‘blog’ into the official online journal of ITIA. We are now nearing the end of 2020, and thus the ten-year anniversary of Transpositions. In light of this, we have curated a year-end series of posts celebrating the good, the true, and the beautiful works of art from the decade of Transpositions’ existence. We have asked artists, scholars, and former Transpositions editors (who are themselves artists and scholars!) to reflect on a work of significant art from the 2010s, how it affected them personally and why we should give our own attention to its wonders.

For this first week, we have contributions from former Transpositions editors and contributors. In week two, we will hear from scholars whose research expertise lies at the intersection of theology, imagination, and the arts. Artists and practitioners—the ‘makers’—will share their reflections in week three, with the series concluding in January with contributions from our current editorial team. In this way—and appropriate for this season of Advent—we are both reflecting on the memories of the past and waiting in hope for the unfolding of the future, celebrating what was and anticipating what will be. 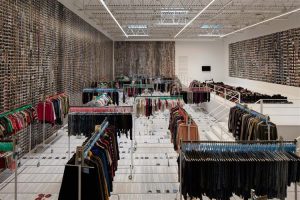 Ai Weiwei’s 2016 exhibition Laundromat is a collection of thousands of pieces of clothing and personal goods collected from refugee camps in Europe. It stands as a memorial to those who have found themselves displaced from war-torn Syria and other parts of the Middle East. Weiwei’s studio collected, washed, pressed, and hung items of clothing left behind in the camps—a mother’s dress, a father’s shoe, a baby’s jacket—all of which communicate the stories of the countless individuals who long for both a home left behind and a new beginning. The experience of the installation as a whole is difficult to take in; one knows not where to begin and becomes overwhelmed by the sheer mass of objects, neatly arranged on racks in the room as if in a thrift shop. The walls and floor are plastered in news clippings and WhatsApp messages, Instagram photos and other media which document the process of escape. While his presentation seeks to overwhelm, his approach to the clothing speaks of a quieter redemption. As each item is found, cleaned, made like new, and placed in relationship to the other objects, he shows how attentive care to the objects serves as a symbol for attentive care to the person. In so doing, Weiwei attunes his viewers to the need to offer those without a place somewhere to call home, while giving us a glimpse of the possibility for the displaced to be found again, whether in this world or the world to come.

Jennifer Allen Craft is Associate Professor of Theology and the Humanities at Pointe University, and the author of Placemaking and the Arts: Cultivating the Christian Life (IVP Press, 2018).

On 29 May 2014, Melvin Crispell, Jr. passed away. Crispell was an influential African-American gospel artist, organist, and songwriter. A week or so later, I came across this YouTube video of keyboard virtuoso Cory Henry performing at Crispell’s memorial service. As a tribute, Henry offered an impromptu rendition of one of Crispell’s compositions. In the years since, I’ve watched the video dozens of times. It is a remarkable performance, but what I find especially interesting is the way Henry’s tribute holds together tendencies that are often set in opposition to one another. First, it is a performance in which extraordinary virtuosity does not compromise liturgical suitability. Only a handful of organists could play what Henry plays, but there is never the sense that we have abandoned church in favor of the concert hall. Even more remarkable is the seamless joining of individual performance and corporate participation. Apart from the subtle drum accompaniment, Henry’s B3 is the only musical voice sounding; and yet the congregation follows and shouts out approval of every modulation, every reharmonization, every surprising shift in voicings and dynamics. Somehow this is both a solo and a choral performance. To take another pair of oppositions: it is also striking that this spontaneous improvisation has—through the medium of YouTube—become an ‘artifact’; studied and discussed by other musicians, and viewed (through postings on several different channels) more than a million times. But most of all, I was affected by the way this transcendent performance is applied to the immanent need of grieving family. In its creative brilliance, it is a moment set apart; in its pastoral function, it is a moment set within the life and experience of the community. As he explores the dimensions of song and instrument, Henry acts as both artist, and—precisely as such—a member of the Church.

Steve Guthrie is Professor of Theology & Religion and the Arts at Belmont University, and the general editor for the forthcoming Oxford Handbook of Music and Christian Theology (OUP).

If I had to choose one work of art that affected me most in the 2010s, it would have to be the BBC documentary Blue Planet II (2017). I remember sitting down to watch the programme with the expectations of being entertained. And it did that. As I plunged the depths and skimmed across the surface of the ocean, I delighted in what I saw. 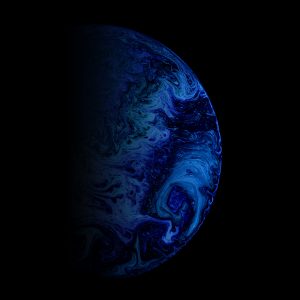 But what was distinct about Blue Planet II was how, in the midst of the remarkable, it forced me to face our collective neglect of tending God’s good creation. While the beauty was so intense that, at times, I could feel it in my body, I found myself weeping as I watched with horror as birds fed plastic bags to their babies and the rising temperatures bleached the colour from our coral reefs. And while I raged at the injustice, I had to face my own complicity, evident in my life choices that prioritised convenience. Not being able to un-see what Blue Planet II gave us, the only way forward has been to change how I live at every level. While I had a profound personal experience, I’ve also watched, with keen interest, the collective response to Blue Planet II: this documentary has been the art event that has part-moved the British general public to concrete action, particularly in relation to single-use plastic. At least pre-COVID, there was a real sense of momentum and innovation to bring real change. And while post-COVID is anyone’s guess, there is now hope and willingness to see environmental justice be a reality in the 2020s.

Sara Schumacher is the Director of Education as well as Tutor and Lecturer in Theology and the Arts at St Mellitus College. She was an original co-founder of Transpositions.

In the winter of 2014–2015, the MoMA hosted a major retrospective by the American sculptor Robert Gober called ‘The Heart Is Not a Metaphor’.  In addition to showcasing the many technical and creative innovations shifting throughout his practice, the exhibition included elements or whole environments from a series of site-specific, large-scale installations that were defining milestones in his career. In fact, the largest and most populated installation of Gober’s career was re-installed for the museum in its entirety—well, almost its entirety. His Untitled, (2003–2005) came together in the aftermath of 9/11 and in response to the trauma and fragmentation many were experiencing. It closely resembles a catholic chapel in the arrangement of its contents, and the artist himself revealed: ‘I want to make a sacred space’.[1] The focal point is a Crucifix sculpture of a headless Christ made of cement with two streams of water flowing from where his nipples would be. Gober knowingly references the Christian tradition’s mystical image of the lactating Christ while also evoking the cleansing and healing powers of water as described by the Bible. In the original installation, the Christ sculpture was fixed to a cast wooden cross, but for its re-installation the cross was curiously missing. Gober was asked about it during an interview at the museum, but at the time he could not verbalize a clear reason for leaving it out. I searched in vain for a rationale. As someone who has followed Gober’s work and written extensively on his use of traditional Christian visual imagery, I find the mysterious choice to be more affirming than disturbing. My fascination with his work has always been fueled by a sense that the indelible images of the Christian story—especially the Madonna and the Christ—comfort as much as they haunt the artist’s practice. In 2014, I was elated to have the chance to see so much from Gober’s career on display but I left all the more encouraged that the Christ image—with or without a cross—is not a dead symbol or worn out trope for him.

Taylor Worley serves as Associate Vice President of Spiritual Life and University Ministries as well as Associate Professor of Faith and Culture at Trinity International University. He is the author of Memento Mori in Contemporary Art: Theologies of Lament and Hope (Routledge, 2019).