The theme was thresholds: physical or metaphorical, small or great, looming ahead, just underfoot, or behind you. Physically and literally, a threshold is a floor or entrance, or the strip of wood on the floor under a door. Like the words window or gateway, the word threshold  also bears symbolic, analogical, poetic and metaphysical meaning. It can indicate the level at which something starts to happen (‘threshold of boredom’) or the point at which something starts (‘threshold of adulthood’).

As the limit between here and there, outside and inside, thresholds have taken on other meanings depending on their context: brink, verge, dawn, doorway, edge, entrance, gate, inception, origin, outset, point, still, point of departure, starting point.

When the Transept artists’ group gathered a few weeks ago to respond to this theme, each artist brought a different interpretation. 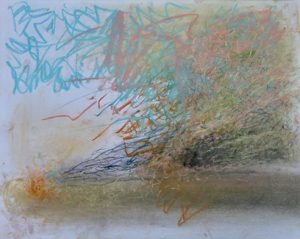 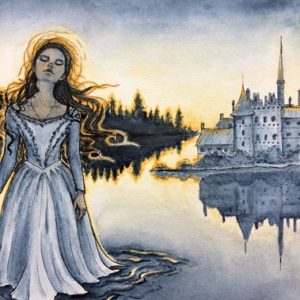 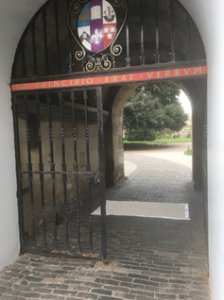 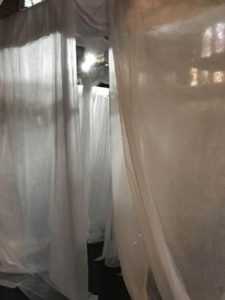 A child was dancing inside of a home

And a piper gave life to his song –

He found out from where all the laughter had come,

At the threshold where he stopped to wait.

Through mud and stones its fingers probe and search

And gathering along the lades and streams it darts

Through weedy shoals where fishing birds are perched…

Threshold has taken on new meaning in a time when we still can’t cross the thresholds of other homes, and soon after a time when we could barely cross our own thresholds to get outside. Like space, distance, and household, threshold has a connotation of anxiety, uncertainty, and longing in this season. The liminal space between here and there, now and not yet, which was always fearful (as Karen Kiefer discusses in her work on Khôra) is now charged with a specific danger and uncertainty.

Paradoxically, fear and the unknown are a space of mystical potential and possibility. While we navigate the thresholds of this season — avoiding forbidden thresholds, exploring new metaphysical ones — visual art, poetry, short stories, exhibitions, performances and songs can hold that moment of transformation and liminality like a child who catches a just-shaken snow globe in cupped hands, with a gaze that turns fear into wonder.