[EDITOR’S NOTE: Writing for our series on artists’ creative processes, visual artist, choreographer, and theologian Sander Vloebergs describes how a unique personal theology has informed his embodied artistic practice. He describes how this playful, intuitive theological method inspired his artwork for the In/break exhibition. This Beloved Bodies project reveals how imagery and choreography can contribute to the creation of theology, inviting a sense of ‘openness’ and encouraging ‘mad experiments’ that enrich our theological imagination.]

I am not a visual artist, nor am I a dancer or a writer. However, during my formation as a theologian and academic, I created art and choreography because I felt the need to express my personal reflections. I relied on my own choreographic and artistic exploration to elevate my theological reflections. My personal theology is therefore informed by lived experiences that draw on my embodied artistic practices. Intuitively, I created a framework and an approach that helped me to question intellectualist academic research by introducing a rare playfulness. In my master’s thesis about the nonsense of time in the Gospel of John and Lewis Carroll’s Alice in Wonderland, this intuitive playfulness came to a climax. I ended up concluding my thesis with a quote from Alice in Wonderland: ‘We’re all mad here. I’m mad. You’re mad.’ ‘How do you know I’m mad?’ said Alice. ‘You must be,’ said the Cat, ‘or you wouldn’t have come here’.[1]

Theology is madness. However, it is not a chaotic hysteria but a method that includes imaginative, intuitive, playful, and associative thinking, which often precedes rational inquiry and challenges its presuppositions. After defending the thesis, I wanted to establish a theological method that incorporated these ways of thinking, which I already utilised in my artistic practice as a visual artist and choreographer. To test out the use of artistic methods within theology, I had to find common ground: a kind of exemplary artistic, theological practice that could accommodate these explorations. I believe that medieval mystical theology can provide this exemplary practice. So, during my PhD research, I studied these texts as both an academic and an artist.

Medieval theology has been called imaginary theology by literature scholar Barbara Newman. She argues that medieval theologians who wrote in different literary genres (pastoral, scholastic, mystical…) are often imaginary theologians. Like poets, these theologians’ primary source materials are words and images. For this kind of theology, images are both the source of theological reflection and a means of communicating theology. The aim of this method is: ‘enabling both writer and reader to visualize, conceptualize, and interact with emissaries of the Divine’. To truly engage with these imaginative theological texts, one must turn inwards, visualize and interact with the texts’ imagery. This creative interior interaction with the texts is a necessary addition to established scientific methodologies. As an artist and early career researcher, I am constantly searching for connections between artistic innovation and established academic methodologies to validate my artistic-theological research. I believe that my heavily concept-based art practice benefits from a well-informed approach to the Catholic imagination.

My VISION-project is my first true exploration of artistic-theology, following the model of imaginative theologians, such as the medieval mystics. I decided to work with the Visions of the 13th-century Brabantine mystic Hadewijch, a series of 14 visionary texts that form a book with an internal coherency and dramatic development towards unification between the visionary and God. Hadewijch is a female author who left little historical imprint beside her oeuvre, consisting of poems (in stanza and in couplets), visions, and letters. The mystical author presents vivid images and characters (such as the eagle, the rose, the bride…) which are carefully crafted and staged (a meadow, a city, the abyss…) within the interior space of the soul. In addition, she is also the exegete who interprets them. Her visions are not meant to be dogmatic revelation about the nature of God. On the contrary, there are no fixed interpretations in Hadewijch texts. Her images function as roadmaps that help the reader navigate the soul’s inner landscapes, which can lead to God. Hadewijch is the 13th-century guide who I decided to follow. By re-enacting her visionary dramatic experience, I aimed to practice my ability to visualize, (re)create, and express a kind of imaginative theology similar to that of medieval mystic.

I chose the medium of visual art and drawing because of my innate ‘at-ease-ness’ with the medium. I decided that illustration could assist me in visualizing the inner world that Hadewijch stages in her text. Making the images visible on a blank canvas helps me to structure the inflow of images and scenes. The formal aspects of drawing, such as composition and light, help me gain clarity in the dreamlike undefined plurality of impressions appearing in the imagination. Within these formal rules of illustration, the images are given the freedom to merge and transform. These transformations are subordinate to rational reflections and aesthetic choices. The canvas becomes an arena, meaning is negotiated and in which the intellect is challenged to navigate between the influx of new images and pre-existing knowledge (about the source text).

During my choreographic explorations, I discovered the importance of tensions between bodies. These tensions help to create dramatic images that fill the arena of the canvas.  They have the potential to renegotiate fixed meaning. I incorporated the power of the multi-layered and ambiguous bodies and placed them at the centre of the canvas. I based these compositions on crucial movements that appear in the visionary texts. Moving from the centre of the composition and the black spaces between bodies to the periphery of the canvas, I allowed for images to emerge and fill in the open spaces. The drawing process, which is time consuming for this style, allows for a profound dialogue between the blank canvas and my active imagination. It was a laborious practice because every inch of the canvas is the product of thorough investigation and intense soul searching. The images are symbols, and they don’t force a fixed meaning on the beholder. They want to be discovered within the space of the canvas. Hence, I create a multi-layered drawing that tells different stories based on images that resonate with the original source material.

The drawing process, which is time consuming for this style, allows for a profound dialogue between the blank canvas and my active imagination.

The first drawing of the series is based on Hadewijch’s fifth vision, in which the mystic describes how she saved souls from purgatory and hell itself, a practice not uncommon amongst medieval holy women. I used the vertical, diagonal movement from purgatory to heaven to create a dramatic movement that takes centre stage. I portrayed an angel saving a soul, depicted as a statue in a church I visited. To complete the human face in profile, I added a mask for aesthetic reasons. The mask then allowed for different associations, such as the spear and the snake, which in turn made me think of the garden of Eden, heaven and hell, and the crucifixion of Christ. All these images are symbols that help the beholder to interpret and interiorize the central drama, namely the movement between heaven and purgatory.

Hadewijch’s seventh vision is her best-known text in scholarly literature, due to her erotic and radical depiction of loving union with Christ.  To create this drawing, I asked two dancers to pose in a composition that reminded me of a pietà. I wanted to capture a movement that expressed surrender. The body representing Mary supports the other body representing Christ. The members of the body are disconnected. They are swallowed up by the blackness at the centre that consumes the images. The dismembered body of Christ is reminiscent of that of the Egyptian god Osiris who is carried by his wife, the goddess Isis. Egyptian and Greek mythology were very prominent in my choreographic work, which I worked on simultaneously with the series of illustrations. The choreography was also based on the works and theology of Hadewijch. This allowed for an intermedial exchange between images and movements. I included a depiction of the goddess of the heavens, called Noet, to give a face to the darkness that surrounded the archetypical bodies. I repeated the motif of the snake, which first appeared in my drawing of vision 5. I borrowed the eagle immediately from Hadewijch’s text, as it is a pivotal motif in her works. It represents John the Evangelist, who is a mystic par excellence. 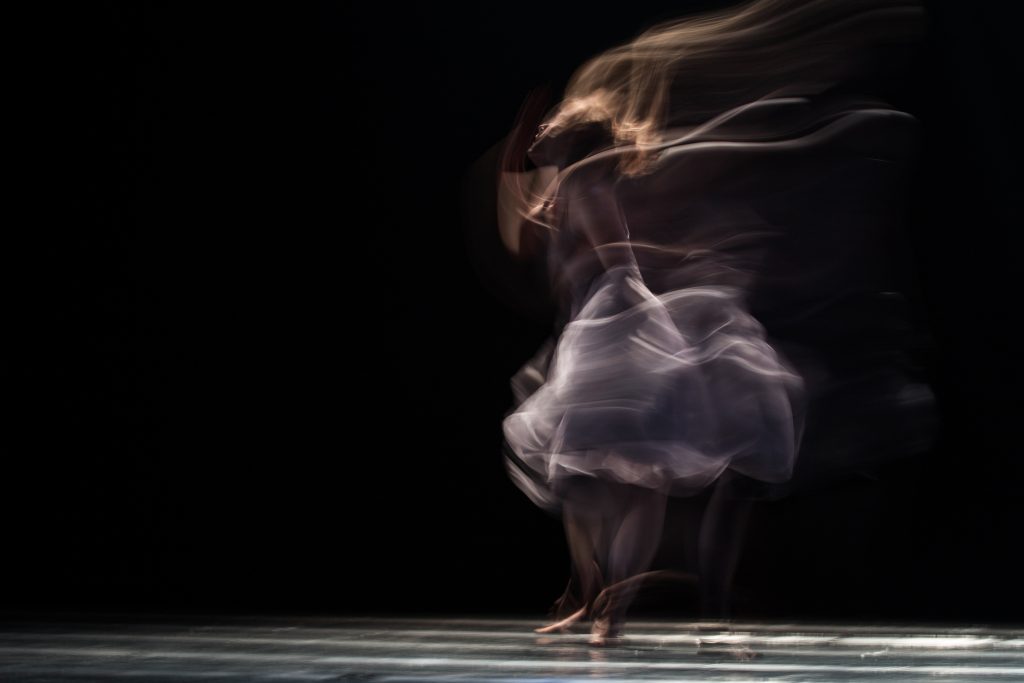 The last drawing is a re-creation of a piece I created earlier based on Hadewijch’s fourth vision.[2] I re-imagined the composition of a female figure and the angel, following the lines of her arms that form a cross. I placed their pas de deux at the centre of the drawing. They both face the beholders, inviting them into their sacred space: a cosmos where two worlds collide (the theme of the fourth vision). Their gaze is not fixated on the other body. Their posture is more rigid and static, like a Christ Pantocrator, representing the universe’s focal point around which creation rotates. I played with dark and light bodies, such as the Anubis figure. The drawing itself becomes a kind of architecture, using images as building blocks to create a sacred cosmic world.

To truly engage with these imaginative theological texts, one must turn inwards, visualize and interact with the texts’ imagery.

During the creation of the VISION-series, I have learned more about the visionary space and the role of images for theology. Too often, images are reduced to mere illustrations. They only represent what is discussed in the texts. However, they can also play a leading role in the creation of theology. In this project, I started to explore how to overcome the bias that favours words over images and bodies. I discovered that the combination of bodily practices (such as dancing) and visualization (interiorization of images) can lead to fruitful results that complement a discursive way of practicing theology. It re-creates an openness that is needed within theology for mad (in the best meaning of the word) experiments.

[1] Lewis Carroll, Alice’s Adventures in Wonderland and Through the Looking-Glass, edited with an introduction and notes by Hugh Haughton (Penguin Classics), London, Penguin Books, 2009, p. 57.

Sander Vloebergs is both an academic and an artist. He recently finished his PhD thesis in Theology (KULeuven) and Literature (UAntwerpen) on the conceptualization and interpretation of pain in the thirteenth-century mystical culture of Liège. Vloebergs’ source materials are ideas and images. His medium is located in the virtual world of the imagination. He expresses his creations through dance and drawings. Vloebergs is interested in the (re)construction of sacred art, movement and composition, and the interrelation between bodies, images, and words.

I have an imaginary friend – you haven’t met her, I don’t think, but she’s a blend of artists I know and you may…