[Editors note: For the second instalment of our series in which artists reflect on their creative process, as they prepare artworks for the In/break exhibition, visual artist Julia MacLaurin describes how her artistic practice created a ‘kairotic moment’, when an opening emerged amidst the hopelessness of closed horizons. Referring to inspiration provided by another member of the Transept artists’ collaborative, she describes her preparations for this ‘sacred moment’.]

Kairos – a passing instant when an opening appears which must be driven through with force if success is to be achieved.

So timing is all.

In the New Testament, kairos  means the appointed time in the purpose of God, the time when God acts (Mark 1:15).

I used two pieces of plain canvas and leaf compost from the garden rotted down (leaves we had gathered from last year) – change and transformation. I like the groundwork. I wet the leaf compost and made circles with it with my hands on the canvas. I often feel the beat of the earth like a drum, a deep and slow sound. I beat the canvas at the centre. I added a bit of acrylic.

Giulia, a fellow Transept artist, spoke of her experience in Calais, working with refugees and asylum seekers trapped in the camp: not much hope and yet all around it there are beautiful blue skies, sandy beaches, a holiday resort. I found that contrast particularly poignant. I rubbed sand into the canvas, dipped my feet into the wet compost and walked round and round in circles. 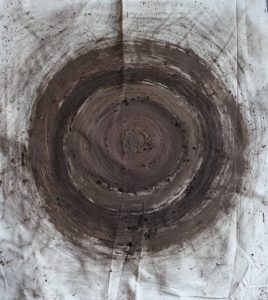 Occasionally, the asylum seekers would break free or undertake a dangerous journey… that kairotic moment: one moment, one movement, one chance, a life-or-death experience.

For me, this project was like a meditation, a journey, unfolding organically. I felt an onus to get the kairotic moment right but realised that was just my ego.

I planned to have a kairotic moment on both pieces but realised I could only do it once. The first piece has the feeling of going round and round without getting anywhere, a hopelessness. I have called it ‘no horizons’.

Does the kairotic moment come from within or without? I felt the inside had to be open and ready, giving over. So, I painted the rusty red from inside out, like an invitation. That morning I saw the sun rise with a beautiful rusty red surrounding it. The colour felt right. Later the sunlight came through the window and the light, colour and shape seemed right for the kairotic moment. It had to be a different colour and texture and I liked the idea of an ochre-ish white light.

I prepared another bit of canvas to do a practice but realised I could not do a test run. It is a leap of faith; the trusting is so important.

I knew that it was a sacred moment, crossing a threshold, so I wanted some sort of ritual. I lit a candle, took off my shoes and socks and my glasses so I could not see very well, mixed the paint, stood at the right-hand top corner (again whether from left or right was important), looked inwards and… 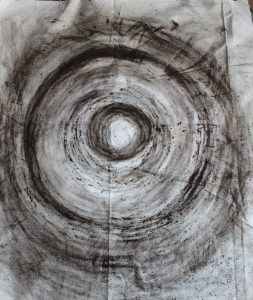 It was very liberating and a moment of completeness. It was a full moon that evening, which seemed fitting.

As it was drying the surface began to crack. I felt that was an important part of the process, opening, moving forward.  After completing it I experienced an amazing divine love.

Julia is attended the Wimbledon College of Art Foundation course, is a graduate of Canterbury College of Art, Fine Arts, and she lives and works just outside St Andrews. She draws and paints from a place of not knowing. It’s instinctive. She finds inspiration from nature, especially trees and the earth. When she draws, immediacy, aliveness, rhythm and feeling is what interests her. She likes working collaboratively and realises the amazing possibilities when tapping into group energy with like minded artists. She has been part of and exhibited with the Transept group since 2019.

If i were asked to say what is at once the most important production of Art and the thing most to be longed for,…