In the second of a series leading up to the Transept event space(  )between in Holy Week, we offer some of the artists’ reflections on their own works in progress. In this reflection, Mariah Ziemer offers an account of interior mental and spiritual space as she strikes out in new aesthetic ventures with her drawings, while Karen Kiefer reflects on improvisational theatre as an experiential glimpse into divine mystery.

Originally from Idaho, Mariah studied visual art and theology at Biola University (California, USA) before moving to Scotland, where she currently attends the MLitt program in the Institute for Theology, Imagination and the Arts (ITIA) at the University of St Andrews. Along with her work for Transept’s space(  )between exhibition, she is currently creating work for the TheoArtistry student-led collaboration project as well as a children’s book to be published later this year.

Throughout my creative process, it is not uncommon for unhealthy doses of critical assessment to sneak in and influence how I view my artwork. For better or worse, I quickly fixate on what the content of my artwork actually means, always looking for some intellectual foundation from which my aesthetic decisions can grow. Ambiguity may be respected (even tolerated for a time), but Explanation impatiently lingers, tapping its foot until it gets the final word. Why do I gravitate towards this definition-driven world? Why is creating within this framework relieving one moment, then aggravating the next? Isn’t interpretation and meaning-making the intended goal for any artist or critic, one might ask? While I recognize the value contained within this mindset, if my answer to my first question is self-centred (therefore revolving around control), then I want to break free from it. For my work in this year’s space(  )between exhibition, this means experimenting with new mediums, erasing less, and embracing unexpected ideas. My intention is to have faith in the pursuit—the infinitely present moments between idea and end product.

Of course, I want this approach to align with the exhibition’s theme, which draws inspiration from the in-between space that Holy Saturday represents. Two of my drawings for the show (titled The Cadence of Time and Still My Footsteps Carry) seek to express internal wrestling that occurs in this space, both in mind and heart. Both pieces are pen illustrations on paper (roughly 16 X 24 inches) and share a similar process: I began by drawing a central image that anchors some question or idea. For The Cadence of Time, this idea revolves around our perception of the movement of time in various scenarios, especially during moments of tension, waiting, or anticipation; for Still My Footsteps Carry, this idea is twofold: our deepest longing for our truest home, and the circuitous journey that leads us there (if we reach the destination at all—?). Time and time again, I am brought back to this metaphor of the journey, or pilgrimage. While I primarily represent scenes from my own walk, my hope is that viewers will resonate on some level and, ultimately, reflect on where they stand in their own paths. 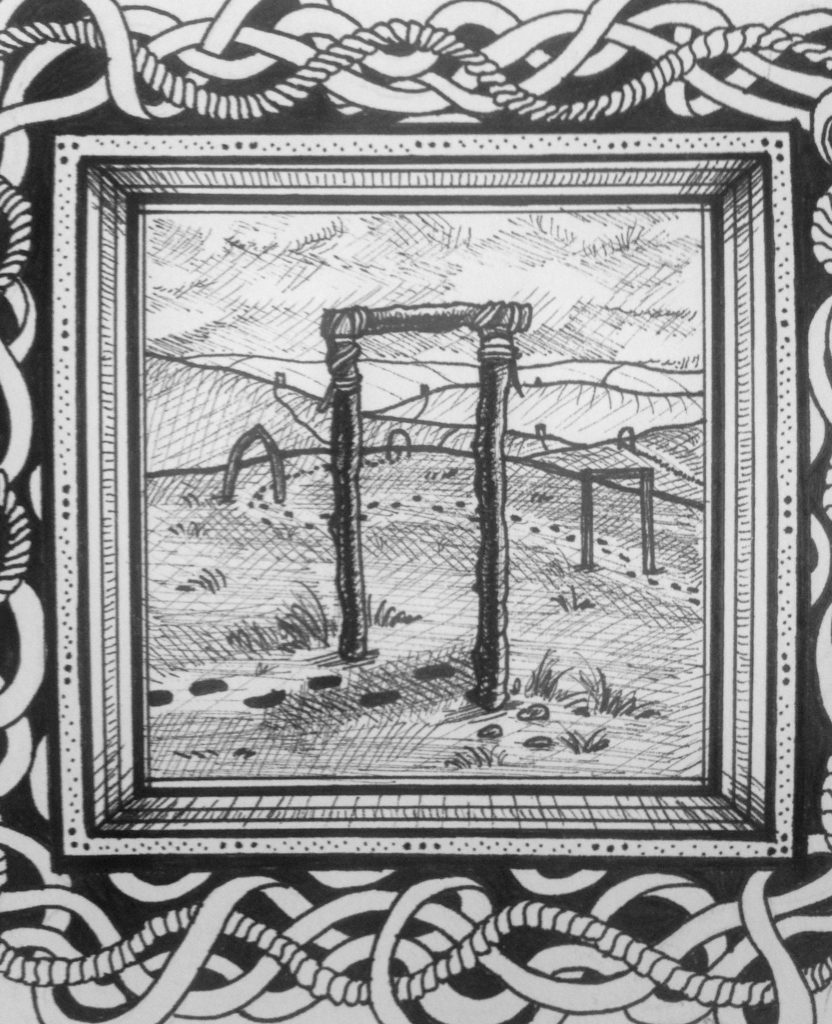 I continued to build images outwards, drawing clusters of objects or framed ‘scenes’ around the central image. I drew whatever came to mind, inspired by my surroundings, dreams, journal entries, music, as well as words, phrases, or scenes from stories that moved me deeply. Sometimes I felt compelled to include text or poetry. This stage was somewhat new for me since I am used to sketching everything out from the very beginning. In other words, I usually have some inkling of what the finished product will look like. Here, however, I only sketched the next thing; as I filled the white of the page (a daunting yet thrilling space of opportunity!), I could only focus on the image at hand. At first this stressed me out, but as I continued to draw, I began to feel a sense of freedom. It was contemplative. I felt oddly secure despite the unpredictability of it all. 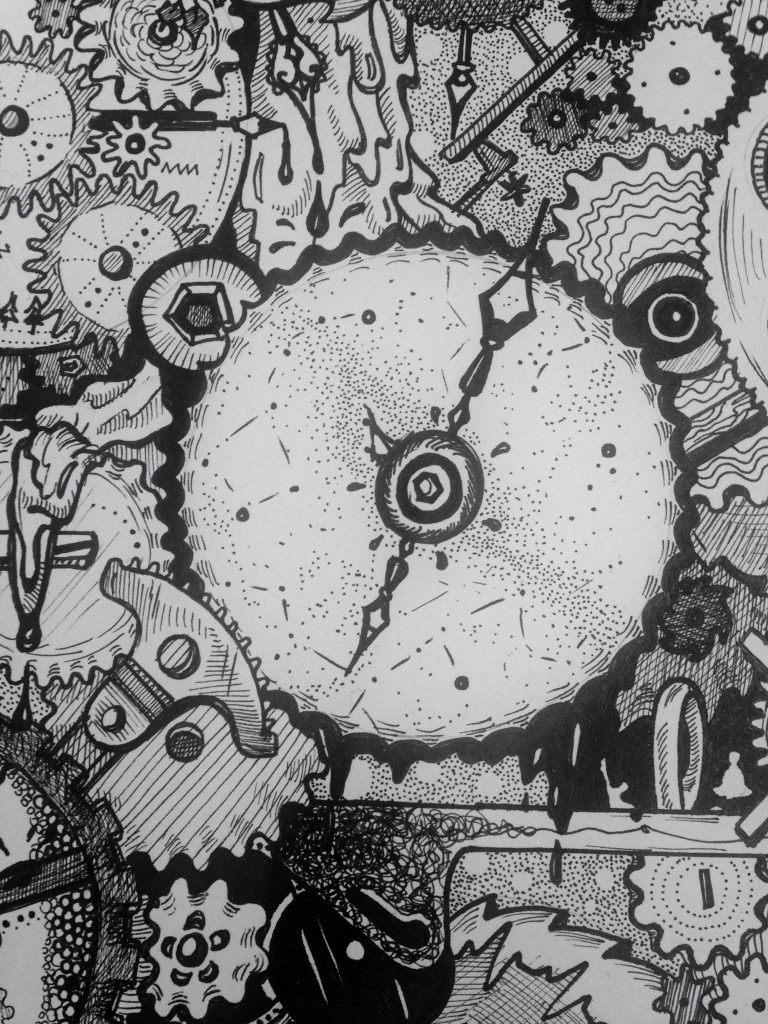 The Cadence of Time

There are additional reasons why I felt compelled to explore these particular ideas, but, as I alluded to in the beginning, maybe it’s best if some things remain unexplained (I still welcome any conversation that ensues!). Even if I were able to explain the extent of why I drew what I drew, I do not feel I am meant to explain it all in the first place; I feel it would do a disservice to the viewer. There is a point at which my artwork must extend beyond myself and allow the viewer to take part in the story. Pride or fear may seek to keep the drawing tucked away in a corner of my room, but I can rest assured that there will always be a special bond between the artist and the artwork, and that a different kind of joy is felt when the artwork enters this shared reality.

Karen McClain Kiefer is Associate Editor for Transpositions and a PhD candidate in ITIA exploring theological and theatrical contexts of ‘empty space’ with emphasis on improvisation and Holy Saturday. Karen is a community theatre co-founder, director, improvisor, a member of Playback Edinburgh, and performer in the internationally touring Mending Monologues. Her current work emphasises collaborative and improvisational storytelling.

It is perhaps more than appropriate, even expected, that any ITIA arts event involving someone (such as me) who focuses on improvisational theatre—both practically and academically—would necessarily find the process of developing a piece or performance very improvisational as well. Perhaps that indicates authenticity! 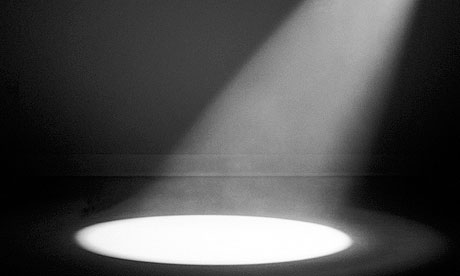 This notion has been very helpful for me to keep in mind as we near the performance I am producing for Transept’s space(  )between event. This performance, taking place on Tuesday 16 April, 2019 at 7 pm, is a tapestry of original stories, poems, monologues, and a song or two, which will also incorporate the improvisational style of Playback Theatre. [1] And indeed, I have needed to improvise every step of the way, from the initial conception through numerous iterations of performers, pieces, and programme line-ups, each of which I thought would be conclusive. But just as things seemed once again ‘nailed down’, a performer would be unable to honour the commitment, or a piece submitted was not quite a fit or needed significant re-working. At one point, there was such a significant haemorrhage of pieces able to be performed, or performers to perform them, that many would have been inclined to cancel the entire performance. However, it is at times like these that a couple of encouraging ‘truths’ always come to mind:

Theatre and improvisation, perhaps like no other art form, live in ‘spaces between’. They are at once annoying and magical reminders that we are not really in control of much, including our art. Anything worth doing, especially something that is an expression of our God-given gifts, is worth having faith in. The uncomfortable ‘space’ that directors, producers, and actors often find themselves in during the process of putting a performance together can feel like a disorienting course of ‘insurmountable obstacles on the way to imminent disaster’, as Rush says in Shakespeare in Love. Yet, especially at this time of year as we enter Holy Week and launch an arts event inspired by the theme of Holy Saturday, we do well to remember that even God entered such a ‘space’. Entombed after a violent death on a cross of human-making, the Second Person of the Trinity was absent in a liminal space utterly mysterious to human imagination. We are not alone in such disorienting experiences. Christ has gone before us. And through that journey, we also experience with him the new life that emerges. It all turns out well. Nothing is impossible with God.

Theatre and improvisation, perhaps like no other art form, live in ‘spaces between’.

Entitled space(  )between Encounters, the varied content of our performance addresses such disorienting ‘between-ness’, including the liminality between cultures, roles, stations in life, phases in life, and between life and death itself. The title itself is a play on the word between—being applicable both as a proper noun as part of the event title and as a conjunction alluding to time. Specifically, the latter interpretation of the title conveys a temporal continuity of encounters in our lives—separated by breaths, sometimes gasps, of time. To fully embrace the notion of Holy Saturday, space(  )between Encounters will be performed within a large installation piece intended to physically represent empty space within which visitors to the exhibit can ponder the themes of liminality. Performers will be backlit and thus silhouetted.

This theme and title are near and dear to my heart. ‘Empty Space’ is the emphasis of my PhD thesis, in which I examine its theological, metaphysical, and theatrical contexts. I give significant emphasis to Holy Saturday, so, when we first began to discuss possible topics for a Transept event that could likely occur during Lent, I was more than happy to suggest a theme related to the ‘day between’ Good Friday’s cross and Sunday’s empty tomb. It is a day, a time, a space even, that often gets little attention since there seems to be (quite literally) ‘nothing’ to it. In Christian ecclesial contexts, it tends to be the day in which the church is decorated for Easter and prepared for Easter Vigil and Easter Sunday services which celebrate the joy of the resurrection, of the overcoming of death and darkness with new life and an ushering in of the New Creation central to Christian faith. We hope that our performance and the overall event of space( )between will give attention to the importance of holding the tension in the ‘day between’ of Holy Saturday, and also honouring encounters with disorienting liminality in our own lives.

[1] Playback Theatre is an improvisational theatre style that incorporates stories from an audience member which are then artistically ‘played back’ to the teller. In this performance, we are incorporating some of the Playback Theatre forms, but no stories will be solicited from the live audience. The stories will come from written submissions of anecdotes.