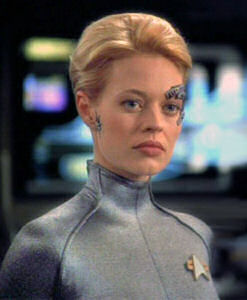 Jim Watkins is assistant editor of Transpositions.  He has recently completed a PhD in theology at the University of St Andrews.  He enjoys reading books, visiting art museums and, of course, watching Star Trek.

One of the most persistent questions that Star Trek asks is “what does it mean to be human?”  And one of its chief modes of asking this question is through characters who experience an “incarnation.”  All of the TV series have one of these characters: Spock, Data, Odo, Seven of Nine (henceforth ‘Seven’), the Doctor, and T’Pol.  None of these characters are human, at least in the traditional sense, and they find themselves in circumstances that push them toward humanity.  In various ways, they each become more human.

It is, of course, ironic that we can learn more about ourselves by watching a fictional non-human on our TV screens.  In this post, I will offer some thoughts about how Seven helps us to understand our experience of time.

We first meet Seven in the Voyager episode ‘Scorpion, Part II’ when she is chosen as a Borg representative to negotiate with Captain Janeway.   As a general rule, the Borg do negotiate, but in this case they encountered a more powerful enemy and their hands were tied.  In the process of working with Voyager’s crew to defeat the new alien threat, Seven’s link to the Borg collective is severed and she becomes a permanent fixture of the crew.

The Borg are a collective of human-machine hybrids that operate as a unified hive mind.  For the Borg, maintaining order and unity while pursuing perfection in the most efficient way possible is the highest priority.  The Borg roam the galaxies looking for advanced civilizations they can assimilate so they can enhance their own collective.  Seven, herself, was assimilated when she was only a child.  The Borg are a powerful enemy to reckon with.  As the Borg say, “Resistance is futile.”

Because Seven is taken from the Borg collective to live with the crew of Voyager, she must learn to accept her individuality.  One of the more difficult aspects of individuality that Seven grapples with is her new experience of time.

As a Borg, Seven experienced something akin to timelessness. She had no memories of her past, desires for the future, or even a fear of death.  These are the sorts of things that individuals care about.

Removed from the Borg hive mind, Seven finds herself torn between the past, present and future.  In ‘Dark Frontier, Part I and II,’ the main conflict of the episode centers around an internal struggle within Seven to understand who she is now, in light of her past and in the knowledge of what it may mean for her future.  To prepare for a particularly bold mission to steal a trans-warp coil from a nearby Borg vessel, Seven reads her parent’s log entries prior to being assimilated by the Borg, and she essentially relives a portion of her childhood.  On remembering this part of her past, Seven is ashamed of and disappointed with her parents for arrogantly thinking that they could study the Borg without being assimilated.  As Seven struggles to come to grips with her past, she is contacted by the Borg Queen who tempts her with the possibility of returning to the Borg collective.  The Borg Queen reminds Seven that Borg is her true identity, and that her humanity died long ago.

Seven is faced with a difficult choice between two competing narratives about her life.  Can she return to the humanity into which she was born, or is she now forever Borg?  The German Philosopher Martin Heidegger regarded temporality as fundamental to human existence, and he argued that humans should learn to live authentically in the face of temporal disintegration, and especially death.  In many ways, Seven does learn to live an authentic life as part of the Voyager crew because she learns that a community is made of individuals, and not merely functional designations.  While the authentic life is courageous, what Seven needs is even more fundamental.  She needs the hope that, whichever narrative she ultimately chooses, her experience of time can be healed.

Fans of Voyager will know that Seven ultimately chooses to remain with the crew of Voyager.  If there is any healing for Seven’s experience of time, it is wrought by the fellowship and acceptance she finds in that community.  Seven learns to experience time in a community, and not merely as an individual or as a member of a collective.  As a member of Voyager’s ‘collective’, Seven has a community to share in her struggles to integrate her past and her future.

The portrayal of Seven’s experience of time on Voyager points to our need for the redemption of our experience of time.  We also are often faced with competing narratives about our past, present and future, and bringing these narratives into a meaningful whole can be a struggle to say the least.  There is no hope for a meaningful existence in the mere timelessness of a Borg collective.  Rather, the redemption of our experience of time is anticipated in the life of Jesus.  Jesus is not torn between past, present and future, and he also is not outside of time.  Rather, Jesus lives an authentic life in perfect obedience to the Father.  There is no sin in Jesus’ life that might lead him to question whether he truly is the Son of God.  Jesus is portrayed in the Gospels as carrying out a coherent mission, in the knowledge that he has been sent by the Father for the love of the world.  The wholeness of Jesus’ life anticipates a day when our fragmented lives will also be woven into a meaningful, glorious whole.

Image Credit: Paramount Pictures.  Fair use justification: the image is being used to comment on the character Seven of Nine.