To the left of the altar in Old Saint Pauls Episcopal Church (Edinburgh) sits a memorial chapel. In that chapel is perhaps one of the most striking recent pieces of church art in Scotland, Still by Alison Watt. Watt is known for her large-scale works of draped fabric, evidenced by her solo show at the Scottish National Gallery of Modern Art in 2000. What is particularly striking about Still is the way that it brings light into what would be a dark chapel, having only a small window to the right and a larger window at the back. The light through the back window reflects off the work and thus gives a luminosity to the chapel space.

Last week, the church hosted To sit in its shadow was my delight, a temporary art exhibition within the same space. With Watt’s work as a backdrop, three artists presented their work. One particularly caught my attention, even more so as I visited on a day when the artist was present. The artist was Kim W. Wilson, a MFA student at the Edinburgh College of Art. Her work is titled What huge effort to move through this silence and consisted of two natural materials – peat ash and bovine gelatin – molded into a long, rectangular shape. The two molds sat on top of each other with the peat ash looking almost granite-like while the glutenous dark-brown of the gelatin sat on top. 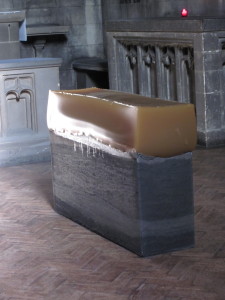 Under room temperature conditions, the gelatin would begin to mold and disintegrate over time. However, because the church was as cold as a fridge, it continued to keep its shape. What was interesting to me, and what I want to focus on in this post, is the way that the works of art interpreted each other while simultaneously falling underneath an interpretation brought on by the sacred space they were in.

In addition to the light it brings into a dark space, Still strongly evokes both the crucifixion and the resurrection. The work is done on four panels and hung so that a cross forms in the negative space. However, it also simultaneously points to the resurrection, specifically echoing the events of Luke 24:12: ‘But Peter rose and ran to the tomb; stooping and looking in, he saw the linen cloths by themselves; and he went home marveling at what had happened.’ (ESV) The sacred space – the arches, the altar, the stained glass – all inform ‘how’ the fabric is seen and thus interpreted. The Christian tradition that lies embedded in the sacred space is reflected through the art to the attentive viewer.

The sacred space and Still also informs one’s perception of the temporary piece of work. With the resurrection in one’s mind, one begins to see What huge effort to move through this silence as a coffin shape. And then the sun shines through one of the windows and lands upon the gelatin. What was once opaque takes on translucent properties and now appears to be glowing, almost as if it is illuminated from within and life is coming from that which was dead. The reminder of Resurrection emerges and then recedes as the sun moves away. The profundity is palpable.

The church, as a sacred space that houses Christian tradition and beliefs, is not only a space for exhibition. It can also be a powerful lens through which works of art are understood and interpreted. At Old Saint Pauls, the space, its light, and the work of art come together to mediate a central Christian belief, adding layer upon layer of poignancy and depth beyond what each element on its own could contribute.

1
Facebook Twitter Pinterest
LinkedIn Email
Written By
Sara Schumacher
More from Sara Schumacher
The concept of beauty in relation to theology and the arts is...
Read More