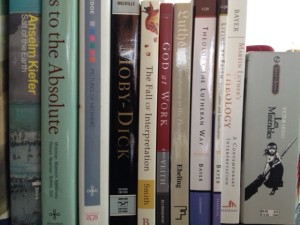 Editor’s Note: As a continuation of Christopher R. Brewer’s recent series engaging the work of Daniel A. Siedell, and, more specifically, as a sort of response to the final concern raised in “A Response to Siedell’s ‘Art and Culture, or Politics by Other Means–Evangelical Style,” we asked Dan if he might put together a list of suggested reading. For it seems as though one way we might follow Karl Barth’s advice to “precede the other,”[1] as well as David Brown’s advice to spend as much time “listening as in trying to contribute,”[2] might be through reading. Suggested reading lists in the area of theology and the arts abound, and include:

The Institute for Theology, Imagination and the Arts, St Mary’s College, University of St Andrews Reading List
Duke Initiatives in Theology and the Arts, Duke Divinity School, Duke University Reading Lists
Byron Borger’s “Selling Books at IAM: and an extended list of books on the arts”
Matthew Milliner’s “The Unmappable Terrain of Christianity and Art”
W. David O. Taylor’s “Top 35 books on theology and the arts“

Noticeably lacking, however, are books from the arts side of the theology and the arts conversation, and so Dan’s list is especially helpful in granting access to that part of the conversation.

Artist Journals and Biographies
Alex Danchev, Cézanne: A Life (Profile, 2012).
Frank Hoifodt, ed., The Private Journals of Edvard Munch: We Are Flames Which Pour Out of the Earth (University of Wisconsin Press, 2005).
Sue Prideaux, Edvard Munch: Behind The Scream (Yale University Press, 2007).

Poetry
I have also found the poet/critic Joseph Brodsky to be one of the most insightful readers of other poets, and so a model for me as a critic. His essays on the Russian poet Osip Mandelshtam and the American Robert Frost are classics, and works I return to again and again.

Theology
My theological development has focused on the distinction between law and gospel. Luther says that this distinction is what theology is all about, and I think he’s right. And I find this distinction richly suggestive for thinking about artistic practice. The work of Oswald Bayer and Gerhard Ebeling have been most helpful in this regard, as they situate this distinction in creational (Bayer) and existential (Ebeling) contexts.  Moreover, my recent thinking about art has been shaped by vocation, which for Luther, is simply the implication of justification before the world (creation and your neighbor).

Daniel A. Siedell (M.A. SUNY-Stony Brook;Ph.D. University of Iowa) is Lecturer in Christian and Classical Studies at Knox Theological Seminary in Fort Lauderdale, Florida. He is also curator of LIBERATE, the resource ministry of Tullian Tchividjian and Coral Ridge Presbyterian Church. Previously he was Professor of Modern and Contemporary Art History at the University of Nebraska-Omaha (2007-12) and Chief Curator of Sheldon Museum of Art (1996-2007). He blogs weekly at Patheos.

Latest Posts By Daniel A. Siedell

We are proud to announce that at the 2010 Christian New Media Awards, Transpositions received the runner-up award for Best Newcomer Blog. Congratulations to…