Proposition: all of life is doxological response and everything to which we put our hands reflects our beliefs.

And Apple products are no different.

At any given moment, whatever we deem to be the most praiseworthy ‘thing,’ we tend to become willing to sacrifice for (including spending more than $299 and entering a prison-sentence of a phone payment plan), and in turn we become shaped by it. Always, then: such a reality should lead us to reflect upon what it has to teach us.

The iPhone, like any created thing, can be good and very beneficial, (after all, as I’m writing this I’m texting someone on my iPhone, and typing on my iMac), but its creation is nonetheless driven by the principles and beliefs of the one making it, which are then communicated at least implicitly to the end-user. With this in mind: Apple continues to use religiously-tinged language in its products that I propose can inspire detrimental shifts in our culture and the ways we behave. 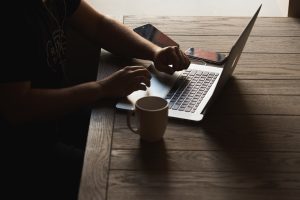 As I result: I believe that understanding Apple’s implied theology is important to our daily lives, given the prevalence of use across Apple products. Apple designers, like all humans, bring their beliefs into their work and, as such, Apple’s products can be deemed as shaping culture into that image. One of Steve Jobs’ famous lines is that his work and life was to ‘Be a yardstick of quality.’ Jobs’ words clearly demonstrate his desire to introduce a standard into everyone’s manner of taste that would help them to determine what good is—based on Jobs’ specific standard.

And the implications surrounding the concept of good can be immense.

Apple’s big push is story. Their brand capitalizes on the fact that they can connect the world’s story cohesively through individuals, harvesting everyone’s creativity to be shared in a vast network that can ultimately give human innovation purpose, platform, and community. The idea of story is good, and innately human, but we must remember who the central character is. After all, in any good story, there exists a main character. If the author fails to establish that character, the story falls flat. This is why the Bible is written in story and narrative. God wanted to tell a story that is full of tension, climax, denouement, turning points, and plot twists. God created us for story and the story of the Bible reflects this.

In Jesus’ time, the religious leaders of the day got the story all wrong in similar fashion to many of the tech giants of today. Like Apple products tend to place the individual at the center of the story, so the leader’s of Jesus’ day had interpreted their place within life’s story in similar fashion. So much so, that when Jesus came along, the disciples thought that Jesus was going to be a political King and that they were going to be his henchmen. Unfortunately, they had read the story of scripture wrong and thought that it was about them, their superiority, and their perfect observance of the law. In Luke 24:27, after Jesus rises from the dead, we are told that the disciples were still profoundly confused about who Jesus was, what the Old Testament was for, and who they were supposed to be, and it tells us that this is what Jesus did: ‘And beginning with Moses and all the Prophets, he interpreted to them in all the Scriptures the things concerning himself.’

Apple technology must be considered in its contribution in defining, shaping, and crafting character and belief. It has the ability to shape us as people, and it forms our belief of what a ‘god’ should be and how our belief in him should look. Let’s ponder the apps for just a moment. If you touch an app, you expect it to move at warp speed, right? If it doesn’t connect you to what you want faster, more efficiently, and with greater ease than it did in its previous version, then you—and I, for that matter—throw a tantrum. We yell when the internet takes .5 seconds to load, we pay $1000 more just to up our storage drives and memory for faster connection and delivery, and we expect the iPhone, in conjunction with Google search, to connect us to what we need, when we need it—right now!

This shapes our character and the way in which we project our belief. Yet, how does this compare with one’s faith? What about the character of Christ? He is a God of patience, forbearance, long-suffering, steadfastness, and slowness. Should this not bear weight into how we are formed, as well? One of the fruits of the Spirit is patience, and Apple seems to be convincing us that this is not a virtue, but a vice.

A change in how we view virtue, shapes our relationship and understanding of the character of God in even the most practical ways. For example, when we pray, we often think God should react on our terms, as fast as our apps do.

When we need direction, we expect Him to move heaven and earth and Google all the answers right before our eyes—as if we expect Him to literally write His answer across the touch screen sky. The theology of all technology has the potential to unshape Christian character and shape our view of what ‘god’ should be like.

Theological and scriptural grounding is necessary to be able to use these techie tools to our advantage, and not to our detriment.

In order to strike this balance, we need to consider even how we listen to the messages of conglomerates such as Steve Jobs’ company, given that in even five short minutes of an Apple presentation, you’ll hear a stream of catch phrases, jargon, and pitches that are all outlined by the word ‘beauty’. It’s no secret that Steve Jobs had taste, and his stroke of genius was not merely in the invention of new products, but in his ability to make them ‘cool’. I will forever affirm Steve Jobs’ biblical desire for excellence.

However, Apple has shortchanged beauty by embodying it as something that looks and feels only physical. In the sale of Apple products, the efficiency, the sleek feel, and the appearance are the stressed aspects of the product’s beauty. What about Jesus’ affirmation of the pitiful display of the women anointing him with oil, as he says in Matthew 26:10, ‘she has done a beautiful thing to me.’ What about Jesus’ condemnation of the Pharisees who were ‘like whitewashed tombs, which outwardly appear beautiful, but within are full of dead people’s bones and all uncleanness.’ (Mt. 23:27) What about Peter’s insistence that true beauty was not in outward adornment, but in inward quietness? (1 Pt. 3) 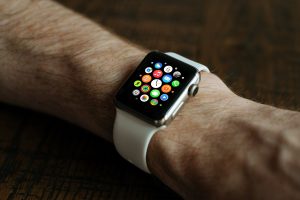 The Apple Watch perhaps plays off the misuse of the term beauty most clearly, with its catch phrase is ‘beauty at a glance’. Hidden suddenly in the pitch is a perspective on the nature of beauty—it’s only for a glance. The Apple Watch wants to create a personalized that’s beautiful only if seen at a glance. But what’s the difference between a glance and a gaze? In Psalm 24:7, David longs to do nothing else but ‘gaze’ upon the beauty of the Lord. In a glance, one can only grab what one wants; it is fleeting. By contrast, in a gaze one contemplates the beauty, the perfection, and the extravagance of another over time, in depth that is relational and oftentimes profoundly moving.

Nevertheless, the Apple Watch is hailed as the ‘most personal device we’ve ever created,’ according to Tim Cook. Following the logic of Apple’s marketing for the Apple Watch, getting to know someone is now to be idealized as being simultaneously as personalized, quick, and nifty as the checking the time. How will this reduction of relation affect how we love others? Facebook has already turned friendship into a number, Twitter has already turned poetry into a hashtag … is Apple now turning knowing someone into something more closely resembling adornment, a piece of jewelry? Are ‘persons’ now only for display?

We must think long and hard about the words we are using to describe things, and more significantly, how we use technologies to form our lives and thus our ideas, and in what manner we allow our hearts to depend on such definitions, conceptualizations, and at heart: such things. Companies like Apple are creating good products, using good language, but they are attaching them to each other without cultural consideration, and in detrimental ways for people of faith.

Therefore, while this post is not intended to be a rally cry to ‘avoid technology’ and return to the simple ways of churning butter and striking steel on an anvil, I do intend to motivate us to be aware of how created things can influence us profoundly as God’s Created, and how such items can ultimately influence how we relate to and believe in the Creator himself. We must consider carefully, and ever theologically, in order to continue to walk in faith while using these seriously ‘cool’ inventions.

Dave Yauk is founder of Garden City, a hub for Christian creativity. In forming creative projects across denominational lines and creating opportunities for great invention to form, Garden City promotes, establishes, and becomes a springboard for all kinds of ideas that benefit Christ body. Dave is also currently completing his Doctorate in Worship Studies and works as a Professor at Visible Music College and Grand Canyon University. He also owns and operates Finale School of Music and teaches guitar online.

Even if beauty is hard to define and difficult to pinpoint, most people in contemporary culture seem compelled to engage with beauty in some…