Works of art that express the life, death, and resurrection of Jesus Christ shed light on the mystery of suffering, and thus present Christians with profound spiritual resources to understand and handle grief, pain, and death. On the cross, Martin Luther writes, ‘God wished to be made known in suffering’.[1] Abandoned by God,[2] the voluntarily and innocently suffering Jesus is grappling with the same question as Job once was: ‘why’? But at the same time, John Paul II notes, Christ also carries the greatest possible answer to this question.[3]

Jesus’s sacrifice brought redemption and has given everyone the chance to participate in Christ’s redemptive suffering. St. Paul understood Christ’s gift when he wrote to the Galatians: ‘I am crucified with Christ: nevertheless I live; yet not I, but Christ liveth in me’.[4] If this mystery is expressed in ordinary language, it can be misunderstood and desecrated.[5] But arts give us an extraordinary language.

Consider Georg Friedrich Händel’s celebrated Messiah (1741). In Händel’s depiction of Scriptural passages about Christ’s suffering, Jesus himself is not excluded from the darkness; the Son of God suffers at the centre of it. One cannot but gasp in horror and shame when the alto repetitively reminds the audience that ‘He [Jesus] was despised and rejected of men, a man of sorrows, and acquainted with grief’.[6] Echoing the Messiah’s substitutionary sacrificial role, the choir in unison affirms that Christ ‘hath borne our griefs, and carried our sorrows’.[7] What a burden he bore! Thus the tenor laments: ‘Behold and see if there be any sorrow like unto his sorrows’.[8] The Flemish painter Pieter Bruegel (c. 1525–1569) did behold and see. 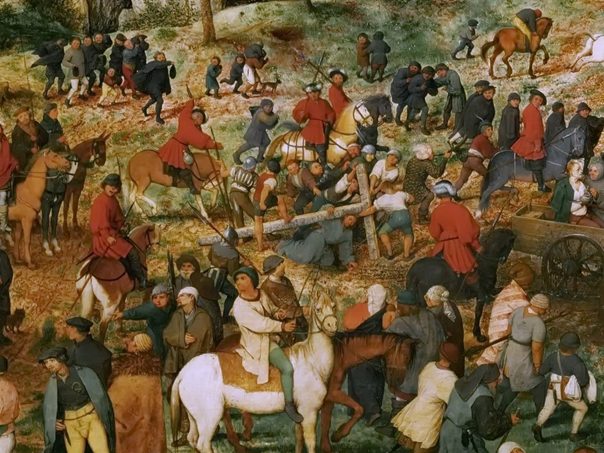 In Bruegel’s Procession to Calvary (1564), Christ is carrying the cross at the centre of a gathering thunderstorm. But as the art historian Jürgen Müller observes, the Messiah, collapsed under the cross, is like any other man, almost forgotten, seemingly ordinary and insignificant to the crowd.[9] But Bruegel masterfully plays with the viewer’s imagination: one is invited to see beyond what is actually depicted, to see the past and the future, and to embrace the salvific history. Such spiritual knowledge of God is represented by two Franciscan nuns and a pair of mother and child, all of them praying. They are ‘looking at something that can only exist in their imagination – they have turned to the invisible cross (…), away from the madding crowd, from the theatre of the world, and from the external Christ, because what matters is the Christ within’.[10] Crucially, neither St. John at the forefront of the painting, nor Mary who is fainting into the evangelist’s hands, watch the procession. While the empty cross in the background indicates that the crucifixion has not yet happened, the lamenting John and Mary suggest that it has already occurred. It is this ‘never-ending Passion’[11] that calls on viewers to participate in the suffering of their Redeemer.[12]

The story of Christ not only helps Christians embrace suffering; it also makes sense of it. Joseph Ratzinger observes that this is because ‘the One who is Beauty itself let himself be slapped in the face, spat upon, crowned with thorns’.[13] Ratzinger’s papal predecessor, John Paul II, writes that through the events in Gethsemane and on Golgotha, ‘the Scripture has been fulfilled’.[14] In the face of Christ’s redemptive work, Christians are called to love Christ and rejoice in their suffering for Christ’s sake.[15] Here is the salvific meaning of suffering.[16] Again, it is art that expresses the immensity of Christ’s death in disturbing realism. 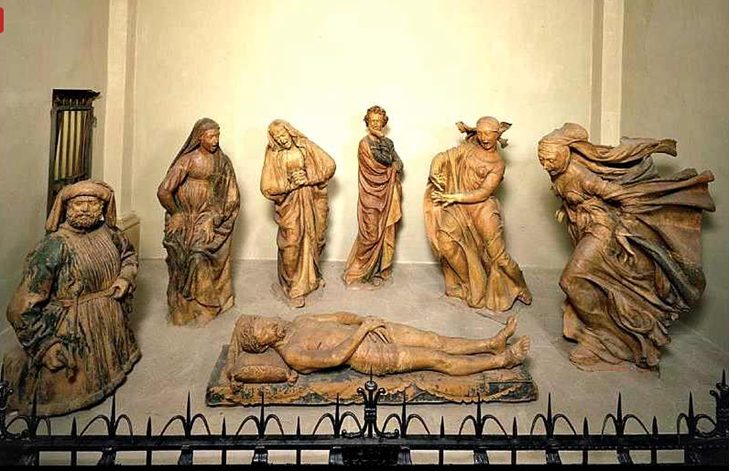 Niccolò dell’Arca’s Lamentation Over the Dead Christ (c. 1463) depicts Christ’s horrified companions as they see Jesus lying dead at their feet. The cause of the companions’ ‘eternal sadness’[17] is that they see a supposed Messiah as a lifeless corpse, without the promise of the resurrection.[18] One can almost hear a soft tenor in Messiah, singing Isaiah’s words: ‘He [Jesus] was cut off out of the land of the living’.[19] At dell’Arca’s scene, the figures recoil in pain while the passing storm almost tears apart the witnesses’ garments, as if sweeping away their best and only hope for salvation. With their every muscle tormented 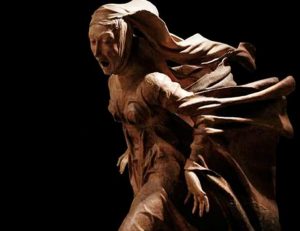 in agony, the Virgin Mary and Mary Magdalene humanise grief; 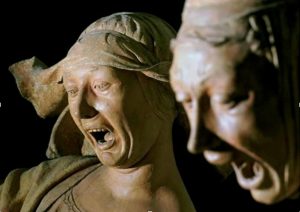 their anguish is ours. The other two Marys show grief in a more prayerful posture, while St. John (much like in Bruegel’s Procession) is rather contemplative, perhaps failing to comprehend the tragedy and suffering inside. Through the Lamentation, dell’Arca shows us what we would feel like without Christ — what Julia Kristeva describes as ‘a suspension of meaning, a darkness without hope’.[20] It expresses the despair one would have to endure if Jesus were not the risen Messiah.

According to John Paul II, in resurrection, one finds ‘a completely new light, which helps him to go forward through the thick darkness of humiliations, doubts, hopelessness and persecution’.[21] Christ’s salvific work does not remove temporal suffering, but it protects one against definitive suffering; one is summoned by the resurrection to definitive happiness in union with God.[22]

The drama and the gospel of the resurrection is captured in Bruegel’s The Resurrection of Christ. As three women arrive at Christ’s empty tomb, they encounter a radiant angel, seated on the stone by the entrance. The women are still confused, uncertain, as they are just about to see the risen Christ above the scene. Jesus floats next to a circular stone which has been moved to allow him to reappear from the darkened depths. Gone is the hardly noticeable human Jesus from the Procession, falling under the weight of the cross. While the composition of the Procession is full of scenes conveying multiple meanings, the Resurrection is simply about the Redeemer; ‘everything else is there simply to support him within the artwork’.[23]

This transcending joy of the Resurrection also flows abundantly from the final part of the Händel’s oratorio. ‘Thou art gone up on high’,[24] sings the alto as if rising to Heaven with the Messiah. The aria filled with the good news shortly turns to a new general theme – the victory of the Messiah over death itself. ‘I know that my Redeemer liveth’![25] thunders the soprano again and again, accompanied by Händel’s music which celebrates the gift of the Son, now shining in darkness. The Messiah conquers sin by obedience unto death, and overcomes death by his Resurrection; so the alto and tenor mock the erstwhile menace: ‘O death, where is thy sting? O grave, where is thy victory’?[26] Meanwhile, Händel’s music bursts in praise to God who has given the victory. 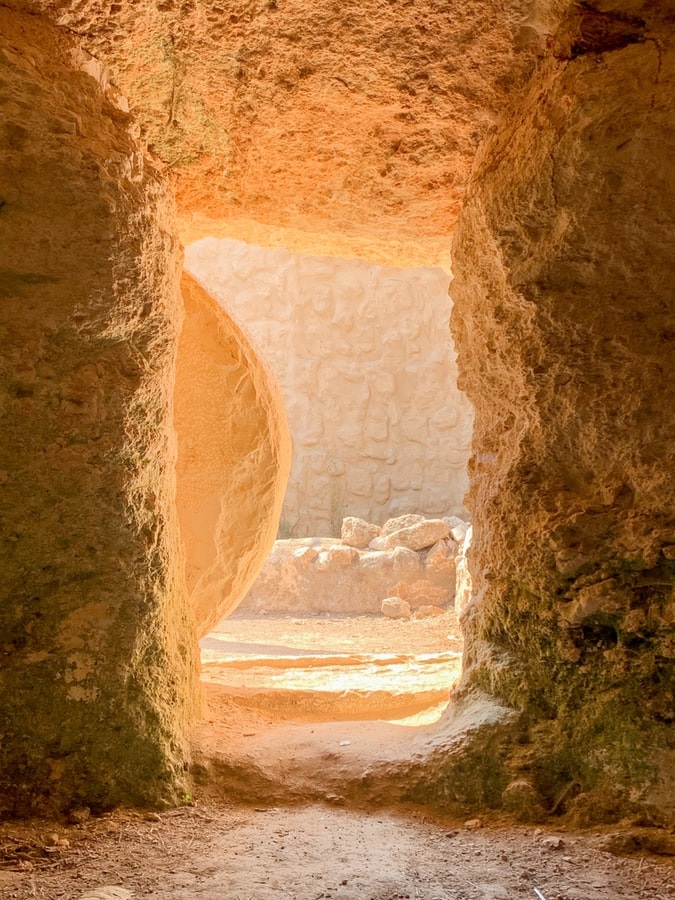 No longer existentially threatened by suffering and death, Christians can triumphantly exclaim, together with St. Paul: ‘If God be for us, who can be against us’?[27] For the ‘King of Kings, and Lord of Lords’[28] dwells among us and ‘he shall reign for ever and ever’![29] Finally, as the concluding notes of the elaborated ‘Amen’ chorus wane, Händel’s music leaves many a listener with the impression that the appropriate response is to live in the presence of Christ, the Healer and the Shepherd.[30]

The redemptive transformation of Jesus of Nazareth into the Christ gives Christians spiritual resources to handle grief, suffering, and death. In Christ’s salvific work, suffering becomes meaningful, while death ceases to be final. Given the mystical nature of this gospel, art in its diverse forms has unique expressive value. Händel’s music, dell’Arca’s sculptures, and Bruegel’s paintings demonstrate the extraordinary power of the arts in illuminating the meaning of Christ’s Passion and Resurrection.

[13] Joseph Ratzinger, ‘The Feeling of Things, the Contemplation of Beauty’, The Sacred Congregation for the Doctrine of the Faith (24-30 August 2002), 4.