Review of Ephraim Radner, The World in the Shadow of God: An Introduction to Christian Natural Theology (Eugene, OR: Wipf and Stock, 2010). 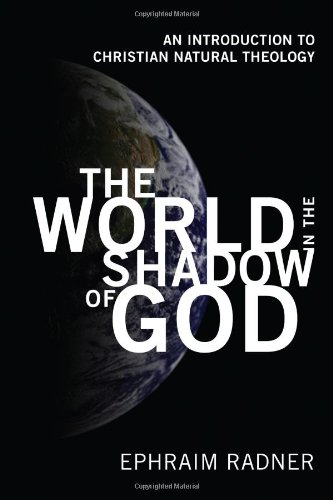 Ephraim Radner delivers a stimulating essay on his vision of natural theology as an introduction to 129 pages of his poetry. This poetry is imbued with nature—worms, rats, hippopotami, and all—but Radner, interestingly, categorizes the poems according to the words of the Apostles’ Creed. Radner’s work is a fruitful and suggestive one theologically if not always a compelling one poetically.

In his introductory essay, Radner provides a brief but valuable discussion of natural theology and the contours of its historical development. This discussion is complementary and supplemental to Alister McGrath’s extensive work on this topic. Radner’s view of natural theology is tied firmly to a scriptural view of nature, and could therefore also be termed ‘creational theology.’ Here Radner speaks especially to those who may be skeptical about natural theology’s validity with respect to special revelation. He argues that any ‘analogy’ between creature and Creator implicitly demands recourse to a clarifying and specially revealed word from this Creator (10). For Radner, such analogy entails that the uncreated Word inspires created ‘words,’ even the natural world, whose analogy to and ‘imitation’ of God become a matter of inspiration (13). The Word incarnate is also an indispensible part of such a vision of natural theology, because Christ, in his physical body, reorients nature to God (19). But, on the other hand, nature’s word is ‘shadowed’ by God’s otherness and human limitation, much as a shadow outlines and represents, but also obscures and distorts, its parent form. Nonetheless, in its limiting and distorting, the natural ‘shadow’ of God is compelling enough to push us up against our own natural boundaries and toward the divine. In this experiential account of natural revelation, Radner compares nature to the law in its shadowed pushing of us toward grace (16–17). In the shadowed stammerings of nature and law, there must likewise be a surrendering to the fullness of Christ the Word, in whom all words and shadows of God are anchored and redeemed: ‘to know God’s shadows is indeed to know something that is fundamental to God that cannot be known apart from them. For “to see me is to see the Father” (John 14:9), says Jesus’ (19, 26).

Radner also presents natural theology in another interesting way by adopting Stanley Hauerwas’s dictum that only authentic Christian witness can permit the church to speak of God’s self-revelation. Radner understands this to mean that the Christian life allows Christians to speak of a resonance between Christian doctrine and the revelation of God in the natural world (8).

Radner’s theorizing on natural theology also stands out by not dwelling on apologetic arguments for God’s existence, but rather by taking the shape of doxological practice, ‘a means of devotion and joyful worship of God’ (6). In addition, natural theology in Radner’s understanding engages our experience of the world as a theological ‘source;’ in other words, ‘reflection upon and within the world around us,’ especially poetic reflection, ‘discloses the Lord from whom and with whom and towards whom we live’ (1). In fact, it is poetic reflection that can uniquely represent the world and therefore ‘embody’ the world’s inspired but shadowy ‘imitation’ of God (17).

In this light, we might even describe poetry as a ‘practice’ through which God becomes knowable through the world, although this affirmation goes beyond Radner’s own. Here Radner might caution that natural theology must ‘take the world as it is found and, without translation, allow the Scriptures and the Church to speak to and with it.’ But if creation is ‘divine art’ as Augustine and Calvin affirmed, is not a disciplined interpretation of such art appropriate and even necessary? Radner does affirm more reservedly that as poetry describes the world, it shapes the theology it encounters. But this reserve stands in curious contrast to his bolder claim that ‘every time the world is described poetically by the Christian, that world utters the words of the [Apostles’] Creed,’ albeit in a partial and limited way (30). Here one might ask, ‘why the Creed rather than some less ambitious revelation that nonetheless requires interpretation?’

Of course, in such poetic interpretation there is always the danger of inappropriate projection onto nature, or mere illustration of doctrine, rather than revelation. But this is a delicate boundary for anyone to delineate without going to the extremes of either denying the world’s speech altogether or finding one’s own predilections behind every bush and beneath every stone. In any case, Christian doctrine, for Radner, must cast its shadow on the world, as the Apostle’s Creed casts its shadow, often obscurely, upon his own poetry (25).

My assessment of Radner’s poetry may be biased by own taste, but many of Radner’s images are difficult to access, and can seem randomly juxtaposed, sometimes in staccato verse. Be advised, however, that Radner’s prose is also often poetically difficult, sometimes adopting a tortuous idiom akin to continental philosophy. A few of his verses seem to rely on ‘meter padding’ for effect:

And the endings of some poems seem too patly Christian: ‘O Lord, you know’ and ‘one man / must still die for the nation’ (45, 47). But often Radner offers compelling descriptions:

And he can conjure arresting natural images: of repentance, in a reassessing of one’s life after the death of a child, and of glorification, in a butterfly taking flight from a cocoon (34–35). In sum, Radner’s main contribution is not the lyrical substance of a poetic natural theology, but its much-needed charter and justification.