[Editor’s Note: In week five of our series on The Saint John’s Bible, we mark the beginning of Advent with the first of three Visio Divina reflections on the frontispiece illuminations for the Gospels of John, Matthew, and Luke.  For an introduction to The Saint John’s Bible and this series, click here.]

The opening lines of the stories we love live in us, and when we hear them we are moved, warmed, by their familiarity. ‘Midway upon the journey of our life, I found myself in a dark wood’, or ‘In a hole in the ground there lived a hobbit’. When the Gospel of John opens with the familiar words of Genesis, we are reminded that we are entering a sacred story, an ancient myth that stirs and lifts our hearts.

The illumination that accompanies the beginning of the Gospel of John in The Saint John’s Bible invites us to wonder at the allusion to the creation story of Genesis. The background of the artwork is a galactic swirl, evoking the primordial chaos from which creation was formed, and the interplay between darkness and light creates a sense of eruption, a sense of the teeming diversity of the cosmos. 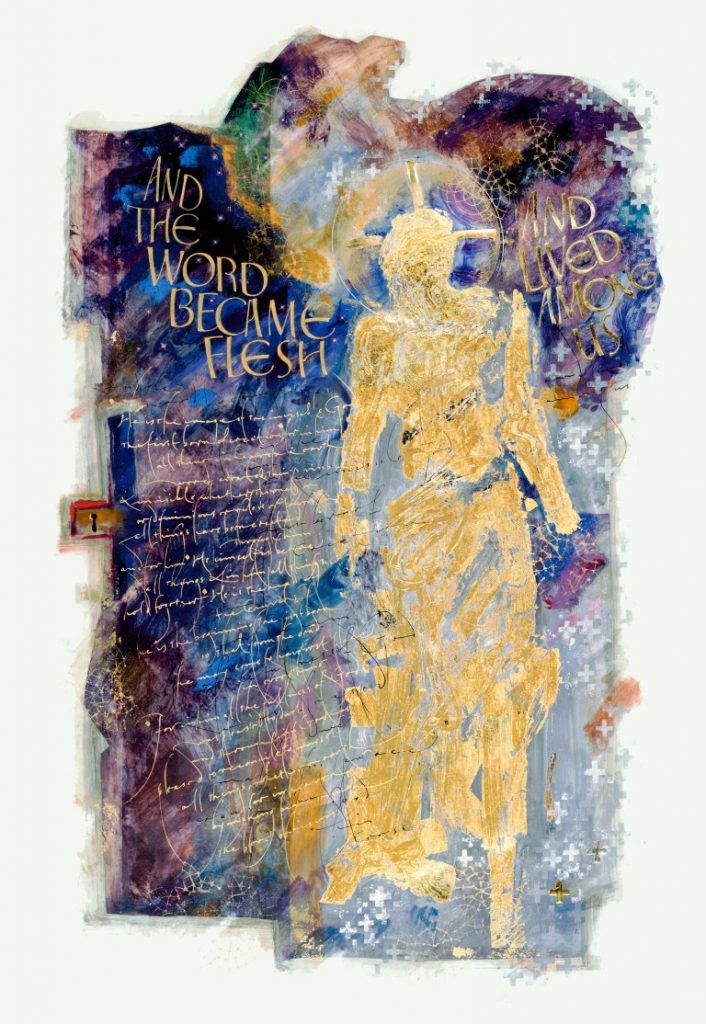 Inscribed in gold on the left side of the illumination are the words of Colossians 1: ‘He is the image of the invisible God, the firstborn of all creation: for in him all things in heaven and on earth were created, things visible and invisible, whether thrones or dominions or rulers or powers—all things have been created through him and for him. He himself is before all things, and in him all things hold together’.

The Gospel of John tells us both that the world was created through the Word and that the Word has entered the world. As I reflect on the illumination, I’m struck by the way both truths mingle in the artwork. The luminous Word to which the eye is drawn can be seen as both giving and receiving the cosmos in the background. The colours that compose the background are found in the Word, and yet the Word is distinct, but not divided, from the cosmos.

The illumination asks us to contemplate this mystery—what does it mean to say that the world is created through the Word? Here, we might reflect on the intra-Trinitarian life. Within the eternal life of the Trinity, all the Truth, Goodness, and Beauty of God is perfectly expressed, imaged, and manifested in the Word. Because the Word is the principle of self-expression within the Godhead, all that comes forth from the Godhead does so in and through the Word. In this way, the logic of creation follows the logic of the Trinitarian life. Theologian Zachary Hayes, OFM, summarising Saint Bonaventure’s thought, writes: ‘As the Word is the inner self-expression of God, the created order is the external expression of the inner Word’. [1]

In the illumination, the body language of the Word seems to suggest movement. The Word appears to me to be stepping forward, moving toward us as we gaze on the artwork. Here, again, we might find the relation between the creation of the world through the Word and the redemption of the world in the Word made flesh. As Russian Orthodox theologian Sergius Bulgakov once wrote, ‘It is proper to the ocean of divine love to spread beyond its shores’. In the sacred story of creation and redemption, God is always moving toward us through the Word. Redemption, like creation, is a free movement proper to the life of oceanic Love. In other words, grace is ex nihilo. Grace, like creation itself, is out of nothing. Through the Word the cosmos is created; through the Word the cosmos is redeemed. During Advent, the doctrine of creation typically doesn’t receive as much attention as other features of Christian thought. And yet, as we enter the liturgical time of reflection on the mystery of the incarnation, the illumination in the beginning of the Gospel of John might allow us to see afresh the relation between creation and incarnation.

‘In the beginning’ may meet our ears with some familiarity, but ‘was the Word’ is strange. Stranger still is ‘the Word became flesh and lived among us’. It seems to me apt, then, that in the illumination the Word is not quite fully formed. My eye longs to see the solid form, the whole thing. Yet, as Maximus the Confessor wrote, ‘As much as He became comprehensible through the fact of his birth, by so much more do we now know Him to be incomprehensible precisely because of that birth. … For it discloses its concealment by means of a manifestation, its ineffability through speech’. [2] In Advent the strange mystery of the Word moves toward us, creating order out of chaos, light out of darkness, and grace out of nothing.

George R.R. Martin famously wrote in The Faces of Fantasy: Fantasy is silver and scarlet, indigo and azure, obsidian veined with gold and lapis lazuli….