‘After I released my catch, Mr. Herzer and I paused for a moment to appreciate our good fortune. In less than five minutes, we had landed a fish of almost startling beauty in a setting no less lovely. I am not a religious person, but I’ll be damned if I didn’t feel something holy.’ [1]

This smart piece of travel writing was inspired by Norman Maclean’s A River Runs Through It, his autobiographical novella about his life in Missoula, Montana, which primarily included fishing and his relationships with his star-crossed brother and his father, a Presbyterian minister. Jon Gluck, the managing editor at Vogue and the author of the Times piece, guides the reader along his pilgrimage to the Mecca of fly-fishing, the Blackfoot River in Missoula. With the same article entitled ‘Worshipping at the River,’ Gluck does two things remarkably well. He manages to wonderfully and aptly capture both the nostalgia of Maclean’s beloved novella and the essence of our secular age. 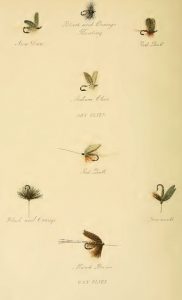 Gluck recounts how his experience hooking a beautiful copper-colored trout in the midst of an awesome Montana landscape inspired a sense of the transcendent, something holy, something akin to worship. The author testifies to the mysterious, seemingly sacred force of beauty; it points to something out there, beyond itself. The beauty in nature points to something beyond the natural, to something holy. There is a surprising, almost revelatory power to beauty, even if it’s not quite comprehensible.

Now, I want to be quite clear: I am not speaking to the possibility of the salvific power of beauty. Dostoevsky’s Prince Myskin famously announced that ‘beauty will save the world.’ [2] Whether his is a voice shouting against the wind or a voice crying out in the wilderness, whether it’s the voice of an idiot or a prophet, I am not addressing here. In all likelihood, the idiot was prophetic. [3] Nevertheless, I am not defending the claim that beauty can save the world. My ambitions are far smaller. What I am arguing here is that beauty opens the world back up.

John Gluck’s experience ‘worshipping’ at the river bears witness to the reality that we are haunted by beauty.

The experience of beauty – in its wildly diverse ways – pierces holes through the immanentized roof of our own making, allowing a distant light to radiate back in. Beauty is the spectre that haunts us, refusing to leave us alone.

James K. A. Smith summarizes it nicely: ‘Our age is haunted. On the one hand, we live under a brass heaven, ensconced in immanence. We live in the twilight of both gods and idols. But their ghosts have refused to depart, and every once in a while we might be surprised to find ourselves tempted by belief, by intimations of transcendence’ [4]

According to Charles Taylor, this is all in keeping with what we ought to expect. In his massive tome, A Secular Age, Taylor attempts to trace the reason why, in our Western society, it was virtually impossible not to believe in God in 1500, while in this new millennium many find this both easy and nearly inescapable. One of the reasons he gives for this paradigm shift of einsteinian magnitude is what he refers to as the process of immanentization. As Taylor sees it, we in the west have, by and large, ‘come to understand our lives as taking place within a self-sufficient immanent order.’ [5] We conceive the world without reference to God; all that is is here, is material, is nature.

We dwell in a disenchanted world, one devoid of spirits and forces, sacraments and magic. This immanent frame is characterized by the ‘naturalistic rejection of the transcendent’ in which we’ve attempted to slough off transcendence as we make ‘progress’ towards maturity. [6]

And yet, ‘for all this, nature is never spent.’ [7] Despite our baptism into the immanent order of a world disenchanted, the project has not been quite successful. The roof of our world has not been hermetically sealed. Sometimes we smell a strange air.

Gluck’s guttural experience of feeling something holy offers a glimpse into what I mean. Though we (speaking inclusively of our secular age) are not religious people, we just can’t seem to shake off this feeling that the material here is not all there is. Dark Matter exists. 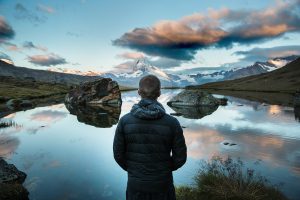 This is why beauty has the power to open the world back up again. The beauty witnessed in art or nature offers what Taylor calls an ‘aesthetic objection’ to our immanent frame. He writes: ‘Art, Nature moves us; we have a deeper sense of meaning; we can’t see our “aesthetic” responses as just another form of pleasurable reaction. They have a deeper significance.’ [8]

The experience of beauty causes people to feel the weight of what Taylor calls ‘cross-pressures.’ As James K.A. Smith explains in his map of A Secular Age, this means people are ‘pushed by the immanence of disenchantment on one side, but also pushed by a sense of significance and transcendence on another side…’ [9] There is a sacred force of beauty that pushes and pulls against the just-thisness of our assumed world.

This, of course, is good news for Christians who take seriously their call to faithfully speak in our secular age. As a result of beauty’s ability to open the world back up, what I am suggesting here is that the Church, in order to fulfill her joy of bearing witness to Jesus – who is the everlasting marriage of transcendence and immanence – ought to reincorporate beauty into her proclamation to the world.

Though it is not the only way to get there from here, one way forward for Christians in the post-Christian west is along the formerly well-worn but oft forgotten path of the Antiqua Pulchritudo, the Ancient Beauty.

The Church would do well to rediscover the power of beauty, not only for our joy but for the sake of the world. Beauty is the allure that will enable us to be ‘fishers of men.’

The reality is that we were born into an age all but closed off to the possibility of God. Today’s church, therefore, is tasked with re-enchanting the world – of opening it back up. One way to do this is by calling attention to beauty and then allowing that which is beautiful to point beyond itself, to the God in whom it finds its source. Late have we loved you, Beauty, so ancient and so new, late have we loved you. [10]

I want to end with one of my most beloved lines from A River Runs Through It. In the story, Norman Maclean describes his father, a Presbyterian minister, as ‘about the only man I ever knew who used the word ‘beautiful’ as a natural form of speech.’ He then writes, ‘I guess I picked up the habit from hanging around him when I was little.’ [11] Perhaps this is just what we need: more men and women whose vernacular includes the word ‘beautiful’?

Imagine the possibilities of a Church who incorporates beauty into the lingua franca of her Christian witness. And not simply beauty ‘unhooked from the ordered cosmos and/or the divine’ [12] but the beauty of the world ‘charged with the grandeur of God.’ [13] Pointing our secular age to the beauty in the world – a beauty that points beyond itself – will open the world back up and once again render belief in God both attractive and plausible.