We live in noisy times.

We are saturated with sounds, words, and images. Silence frightens us, and for good reasons. The world is hard and broken and if we stop and think about it all too long, it overwhelms us. The human mind cannot handle the full force of all the evils in the world.

We have to drown out our awareness, and one of the ways we do this is with noise. But on top of that, many of us recognize the culpability of the silent bystanders in the tragedies of history, and we do not want any more blood on our hands. So, we react to injustices with as much noise as we can muster.

The problem with everyone raising their voice at once, though, is that the noise ends up perpetuating all the fear and anxiety and pain that we cannot really handle and that we have to drown out. Eventually, all of the noise will just make the world deaf. Our hearts might be in the right place, but our spirits are breaking under the weight of the sound. What we need is a different kind of silence—not one that fosters danger or despair, but one that can teach us and heal us and help us to heal our world.

Thoreau writes that ‘silence is the universal refuge, the sequel to all dull discourses and all foolish acts, a balm to our every chagrin, as welcome after satiety as after disappointment’ and that ‘all sounds are her servants and purveyors.’ [1] He continues:

The orator puts off his individuality, and is then most eloquent when most silent. He listens while he speaks, and is a hearer along with his audience. Who has not hearkened to her infinite din? She is Truth’s speaking trumpet, the sole oracle, the true Delphi and Dodona, which kings and courtiers would do well to consult, nor will they be balked by an ambiguous answer… As often as they have gone gadding abroad to a strange Delphi and her mad priestess, their age has been dark and leaden. Such were garrulous and noisy eras, which no longer yield any sound, but the Grecian or silent and melodious era is ever sounding and resounding in the ears of men. [2]

Thoreau points out some important ironies here: the most effective and impactful form of sound is sound that creates silence. Sound that gives way to silence, and eras characterized primarily by this kind of sound, are the most resounding. Noise does not foster significant or lasting ideas or changes—silence does. 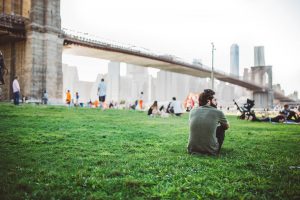 What we need, then, is to re-train ourselves to use sound to create silence. This is where we need Art to step in and, in its imaginative and subversive way, teach us how to turn our noise into silence. Art has the creative power to make a new kind of space and to show us new visions, but it does not do this by shouting its visions into the noisy crowd. Art stands alone in the corner and whispers. It whispers, ‘Listen. I’ve just seen something, and I can help you to see it too. But you have to stop and listen.’

Its whispers subvert the noise through quietness, and anyone who chooses to listen might find herself in a new kind of space where she can catch a new vision: a vision of beauty that overwhelms the world’s ugliness, a vision of peace in a time of war, hope in a time of despair, silence and reflection in a noisy world of reaction.

But art, as powerful a force as it is, will not force its power on anyone. It will not raise its voice. And as strong as art can be, it makes itself meek and mild in order to avoid becoming part of the maddening crowd, and it depends on us, both artists and audiences, to preserve its life.

The trouble is that it is very easy for us, often out of good intentions, to drag art out of its quiet corner and make it a part of the noise.

The essential problem, I think, is that we instinctively want to preserve good and true and beautiful things when we see them, and now more than ever we have the capacity to do so. It is remarkably easy to capture words, images, sounds, or events that inspire us and share them with the world. But when we catch and share them, we take them out of their quiet corners, out of the spaces and the silences that they are trying to create, and we turn them into more noise.

If we want to preserve art in its full power, and if we want it to accomplish the work of creating the healing and resounding silence that we so badly need in our world, we have to be intentional about respecting it. The only way art can accomplish its work is by being allowed to live out its life in the space that it chooses for itself, and then to fade away into the silence that it leaves behind.

For the artist, respecting the art means, first of all, putting oneself in a place of quiet and contemplation. Sometimes that means running the risk of entering into the dangerous or desperate silence that we all want to avoid. Sometimes it means being all alone in a corner. It means finding space to step back from the busyness and the noise and the expectations of the world. Above all, it means valuing art over ego.

And for the listener (whether that listening be in the form of hearing, seeing, feeling, or whatever else), it means simply being present. It means not trying to capture the art or the moment or the feeling or the lesson learned, but instead simply taking the fleeting moment in which the work of art comes to life and does its work, and then letting it go and leave the silence behind. It means letting that silence exist, and letting it transform you. It means letting the art live, and then letting it die. Only then can it perhaps rise again with a renewed strength, in a new corner somewhere, with a new set of listeners, adding to the waves of healing silence that can resound around the world.