At the centre of the first season of the BAFTA-winning comedy Fleabag is the gleefully promiscuous eponymous protagonist, played by Phoebe Waller-Bridge, whose answer to most of life’s questions is sex. [1] So when Season 2 introduces into its bawdy and irreverent mix a raffish, recently ordained priest, played by Andrew Scott, whose alcohol intake is at the upper end of social, there seems to be only one direction in which the plot can go. 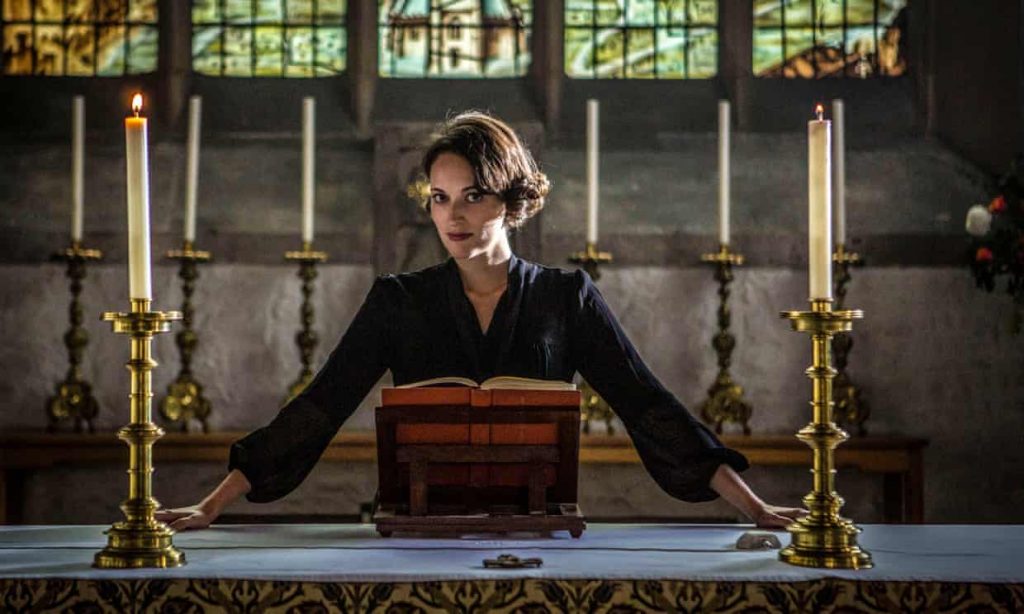 Yet Waller-Bridge does something much more interesting and more subversive than showing a member of the clergy fall into a sexual imbroglio (though she does this as well): She allows religion to call the show’s prevailingly profane worldview into question. [2] 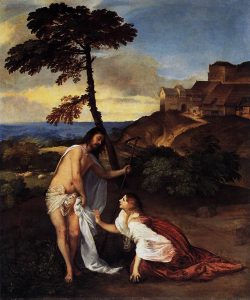 This subversive tendency first becomes apparent in Episode 2, in which Fleabag and the priest (who remains unnamed) are sitting in the sacristy drinking cans of G&T, when immediately after she airily declares ‘I don’t believe in God’ a copy of Titian’s Noli me tangere falls with a crash from the wall behind her, unsettling her customary facetious sangfroid, in response to which the priest wryly remarks: ‘I love it when He does things like that’. [3]

The second and even more subversive incident relates to the show’s trademark breaking of ‘the fourth wall’ with metaleptic asides, in which Fleabag turns to the camera, à la Oliver Hardy, and offers a salty meta-commentary in an extra-diegetic manner to the audience. What happens, however, at the end of Episode 3 is that when in her customary way Fleabag turns her arched eyebrows towards the camera, the priest asks her ‘Where did you just go?’

In Episode 4, this strange process of becoming transparent is taken a stage further; for, as Fleabag is interspersing her conversation about the afterlife with comments to the audience expressing her desire for the priest (‘His beautiful neck’), the priest begins to overhear her asides. (Conventionally, breaking ‘the fourth wall’ temporarily establishes another wall between the character doing the breaking and the other characters in that diegetic sphere. So what happens in Fleabag is in a sense a breaking of the fifth wall.) In this way, by allowing one of the other characters to become aware of its otherwise ‘transcendent’ asides, Fleabag subverts its own subversive practices.

This is of course wonderfully witty and as arresting as the first instance of the show’s diegetic transgressions. Yet the development also has something of a fairy-tale character, for it is as though Fleabag’s asides start to become transparent as she learns to trust and open herself up to another person. Indeed, it is as if she is becoming fully human again, as she learns to love after the traumatic death of her mother. [4] Thus what this unexpected development suggests is that the show’s ‘alienation device’ is somehow tied up with another more personal sort of alienation. This is partly why, in the show’s poignantly poised finale (with a bathetic cameo from a CGI fox, on the trail of the alepouphobic priest), when Fleabag waves goodbye to her extra-diegetic audience it carries with it such an affecting sense of significance and closure. [5] 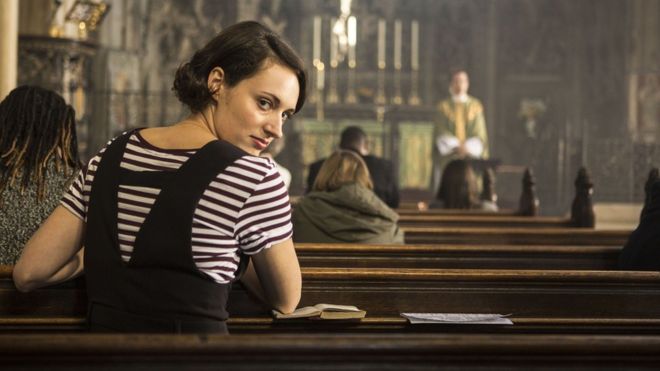 Yet the fact that her hitherto ‘transcendent’ asides—which are akin to a kind of interior monologue disclosing Fleabag’s uncensored thoughts—have become transparent, and transparent to a priest, is theologically suggestive too. It may, for instance, evoke the ‘omniscience’ of one to whom ‘all hearts are open, all desires known’, and from whom none of our secrets are hid. [6] Though it also anticipates the pivotal confessional scene in Episode 4, in which Fleabag literally speaks through a wall to the priest and candidly confesses her sins (though she squirms at the ‘s’-word like someone reluctantly trying on fancy dress).

It isn’t of course all good news for the church, whose relevance is questioned, whose wider failings are kept in view, and whose louche representative eventually loses his battle with concupiscence. [7] (Before this happens, there is a ‘temptation’ scene, in which Fleabag and the priest kiss for the first time, beside the confessional in the darkened church, as a portentous setting of the Kyrie is played (composed by Isobel Waller-Bridge). In the midst of the escalating petting that ensues, a picture once again falls to the floor, with two startling crashing sounds—whose effect is heightened by a simultaneous cessation of the music—which suddenly brings them to their senses and seems like an admonition from beyond. [8])

And yet, in spite of this negative portrayal of the church, what Fleabag surprisingly also charts is the emergence of a tentative openness towards the divine, as its avowedly atheistic lead comes to question her dismissive attitude towards belief. [9] What’s more, without letting go of its spikey irreverence, the show is prepared at a meta-level to countenance the possibility of something beyond its apparently settled secular vision, even if it doesn’t unequivocally endorse that something. 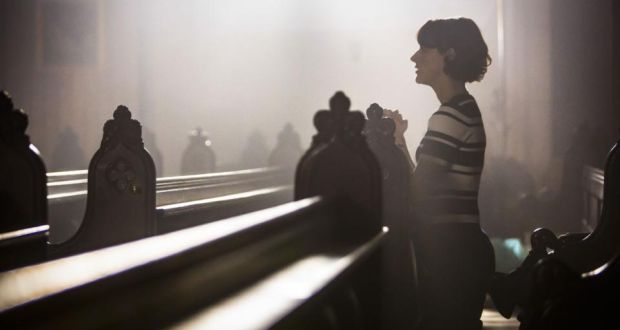 This ambivalence towards the religious is most obvious but also most enigmatically coiled in the show’s exploration of the different valencies of erotic love, as it is eros that leads the priest astray but which also seems to draw Fleabag towards the divine. To be sure, this tensive intertwining of different loves is an ancient subject, which is famously expounded in Plato’s Symposium and perhaps most exquisitely depicted by Dante. [10] To its credit, however, the show avoids giving us any readymade answers, and it doesn’t present the relationship between eros and agape as conducive to an automatic ascent of the soul; though neither does it present them as mutually exclusive, nor does it shrug off the matter as unimportant. Instead, their relationship is presented as a problem and an agonizing tangle we need to work out. (This is the burden of the priest’s sermon in the show’s finale—at the wedding of Fleabag’s father and godmother—whose awkward reflections on the subject of love call to mind even as they pointedly avoid the customary reference to 1 Corinthians 13: ‘I was taught if we’re born with love, then life is about choosing the right place to put it’. [11])

Like Lena Dunham in Girls and Rachel Bloom in Crazy Ex-Girlfriend, Phoebe Waller-Bridge has daringly widened the ways in which women and female sexuality have typically been depicted on screen. In season 2 of Fleabag though, she has also expanded the parameters of her comic creation by allowing her libidinous anti-heroine to be troubled and even in a sense transformed by a view of the world that most of the show’s characters—and I daresay many of the show’s viewers—do not share. Fleabag, in other words, may be seen as an example of the ‘post-secular’ tendency in contemporary culture, which is sceptical but hospitable to divergent possibilities, and which keeps its distance from organized religion but which discreetly leaves a door ajar and safeguards even as it harbours suspicions about an opening in the walls of the secular world.

[1] As Fleabag phrases it to her therapist, ‘I spent most of my adult life using sex to deflect from the screaming void in my empty heart’ (Season 2, Episode 2).

[2] Waller-Bridge—who describes herself as an atheist but who was educated at St Augustine’s Priory, a Catholic independent school for girls in Ealing—has commented on her motivations as follows: ‘I liked the idea of Fleabag meeting her match in someone with the same intelligence and wit she has who leads a completely different life’ (cited by Neil Smith, in ‘Fleabag is back—and she’s found religion’, BBC News website, 3 March 2019).

[3] The painting depicts Christ’s post-resurrection meeting with Mary Magdalene, as described in John 20:14-18, in which he tells her not to touch him (‘noli me tangere’). Whilst neither of the characters appears to notice its significance, the painting’s subject is obviously relevant to their predicament and the subsequent narrative, since the composite figure known as the Magdalene is traditionally (though dubiously) associated with ‘the sinful woman’ who anointed Jesus’s feet in Luke 7:36-50; however, she is also a witness to the resurrected Christ, and so comes to be known as the ‘apostle to the apostles’. Furthermore, the painting’s reference to Christ’s reprimand, ‘noli me tangere’—which is typically read as an exhortation to a form of faith that doesn’t cling to an earthly presence—in a sense foreshadows the show’s finale, in which the priest acknowledges his love for Fleabag but distances himself from her physically, saying ‘You’re never allowed in my church again’.

[4] Speaking about the death of her mother in one of the flashbacks in Episode 4, Fleabag says: ‘I don’t know what to do with all the love I have for her. I don’t know where to put it now’.

[6] The Collect for Purity cited from The Book of Common Prayer.

[7] The show’s general criticism of the church is mainly conveyed by means of humour. Sometimes this is a matter of gentle mockery, as in Episode 5, when Fleabag attempts to get rid of a lover by saying: ‘My priest is here and he really needs some guidance’. Though at other times this is much more pointed, as in the opening episode when Fleabag’s godmother and soon-to-be stepmother is quizzing the priest about why he is estranged from his brother:

[8] In between the two dramatic interruptions caused by the pictures falling, there is a third more jokey instance of what the show allows to appear as a sign from God. In Episode 4, as the priest is struggling to reach a bottle of whisky from a prohibitively high shelf, he mutters ‘God help me’, at which point the whisky falls into his hands, to which he responds ‘Whoa! Thank you’.

[9] It is important to stress that the turn towards religion in Fleabag is ambivalent and inchoate. This is apparent in the overarching development of her character but also in a number of key incidents. In Episode 4, for example, Fleabag accompanies the priest to a Quaker meeting, in which she seems—to her own surprise—to be moved to stand up and speak, as if prompted to do so by an unseen exterior agency, muttering as she does so ‘Oh my God, my God—what am I going to say?’ What she does say, though, is: ‘I sometimes worry that I wouldn’t be such a feminist if I had bigger tits’. Later on in the same episode, Fleabag attempts to pray in an empty church and—as the flashbacks to traumatic events in her life suggest—this appears to involve an unveiling of her interior self in the presence of the divine. (The sense that something significant has changed is emphasized by the manner of her metaleptic aside, as Fleabag turns towards the camera not with a smirk but with a contorted frown that seems to say to an incredulous audience: ‘I know, I know, but nonetheless …’) However, once again the scene tilts into bathos as her prayers are interrupted by the jaunty sound of ‘Jenny from the Block’ emanating from the sacristy.

[10] As Simon Blackburn points out, ‘while we might stumble at the association […] Plato apparently has no problem at seeing the divine rapture at the end of the process as perfectly continuous with the lust that started it out’ (Lust (Oxford: Oxford University Press, 2004), 37); and as Hans Urs von Balthasar observes of the Divine Comedy: ‘The thoroughly earthly love of the Vita Nuova is carried as far as the heights of Heaven; indeed, it is extolled as the motive power for the whole journey through the hereafter. The love, which began on earth between two human beings, is not denied, is not bypassed in the journey to God; it is not, as was always, naturally enough, hitherto the case, sacrificed on the altar of the classical via negativa; no, it is carried right up to the throne of God, however transformed and purified’ (Glory of the Lord III: Studies in Theological Style: Lay Styles, trans. A. Louth, J. Saward, M. Simon and R. Williams (Edinburgh: T&T Clark, 1986), 31-32).