A favourite poster of mine, and one that has accompanied me half way around the world, is Sea-Dancer by the futurist Gino Severini, painted in 1914. It has a wonderful chromatic exuberance and fluidity, and one notable feature is that Severini’s brushstrokes spill over onto the frame. Obviously this was intentional: why else paint on a pre-framed canvas? But it seems to represent a vivid, if futile, attempt to break free from the medium’s constraints.

Alexa Meade, a young Washington DC-based artist, has found a startling solution to such limitations. The photographs of her work appear, at first glance, no different from the respectable contents of a portrait gallery. Her brush-strokes are generous and broad, full of colour and reflections that evoke–rather than minutely detail–the mood and play of light on the subject. As character studies they stand up to scrutiny, full of pathos and life. 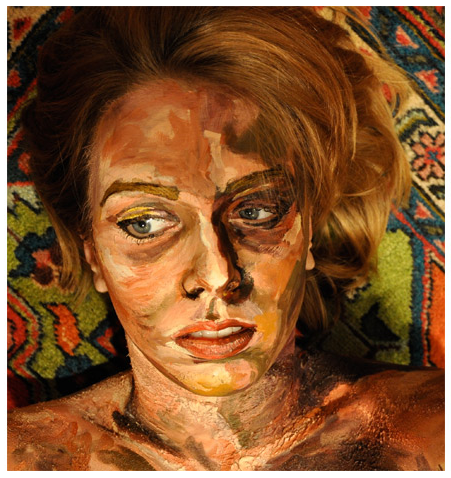 But then it suddenly occurs to the viewer that this is not artificially captured life. The hair is real. The eyes are startlingly vivid. For in fact, he subjects are alive! Her canvas is the human figure she depicts, with paint covering her subjects’ skin, clothes and even occasionally their setting. The fleeting moment or relatively short-lived installation is then captured digitally, the result being a unique hybrid of painting, performance and photography.

Consequently, Meade offers a fresh expression of the artist’s quest to blur reality and artificiality. The effect is uncanny, unsettling even, as with the mobius-strip-like self-referentiality of her self-portraits. The curiosity, bemusement or perplexity fellow metro-passengers express toward Timmy, the painted subject of Transit, is a case in point. This is 3-D trompe l’oeil for the twenty-first century. 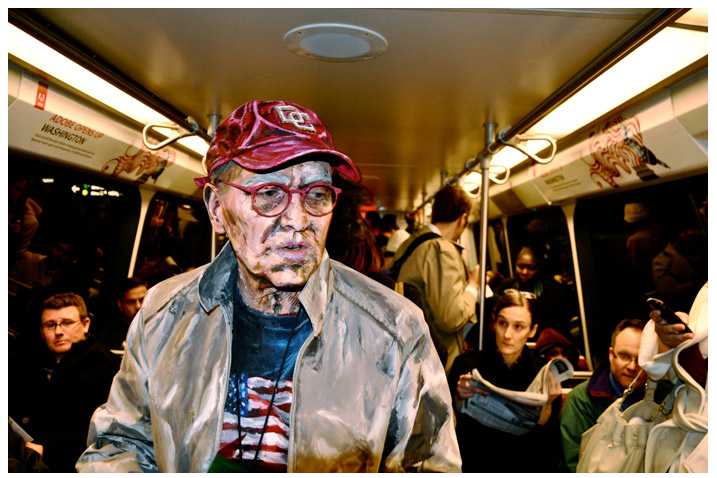 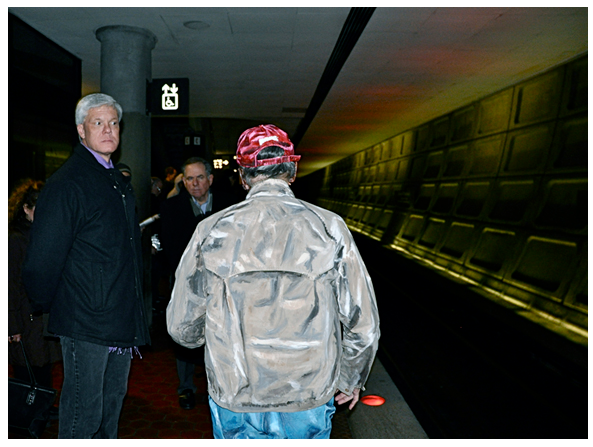 Meade conceals her subjects in an acrylic mask. But we have travelled a long way from the highly stylised, theatrical masks of the classical world. For these masks actually seem to reveal her perceptions of the subject’s inner life. Thus, they contain authenticity as well as vibrancy. It is not often that masks actually expose what they mask. But that seems precisely the effect of Timmy’s mask. He now appears more world-weary and life-ravaged than he might otherwise. Then there is the fact that Meade has painted his clothing. Does the fact that she has emblazoned (or at least highlighted) his shirt with the Stars and Stripes suggest a connection, or even a conflict, between his obvious burdens and his patriotism? So, there is a sense in which Meade’s masks are more truthful than the natural masks we use to conceal our true feelings or intentions.

As far as I can tell, the only people who are painted in the Bible (albeit metaphorically) are the hypocritical Pharisees blasted by Jesus:

In contrast, Meade’s images give us access to her subjects, revealing their internal voice.

To the extent, then, that an image discloses otherwise concealed truth, it can be regarded as prophetic. We are so accustomed to images having the opposite effect in cultures of spin and digital manipulation, that there is a profoundly refreshing quality to what she achieves. But as one who previously worked on the Obama Presidential Campaign, Meade is perhaps far more aware of this than most. As she says of her political past:

there is always more to an issue than meets the eye; what one experiences cannot always be interpreted at face value. Seeing is not necessarily believing.[1]

Of course, her combination of media could as easily be used to conceal as to reveal. But that doesn’t seem to be Meade’s intention. Like all the best artists, she wants us to see what we always see, but with a more probing eye.

The eclipse in Ronald Knox’s fortunes after his death contrasts starkly with the recognition that he had enjoyed in his lifetime as writer, classicist,…