Editor’s Note: This is the third installment of a four-part series by Jim McCullough that will look at the ways in which art contributes to faith. Please be sure to read parts one and two. 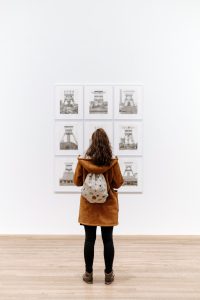 Phenomenological analysis teases out how an artwork is invested with an autonomous ‘presence,’ one that meets the subjectivity of the viewer with its own objectivity. Art in this perspective is rescued from being merely a mirror for the viewer’s own subjective play and seen as something that ‘talks back,’ as it were, in its own voice. One term associated with phenomenological analysis is ‘horizon.’ Horizon refers to the perspective or commitment of a given person or object. A viewer’s horizon meets with that of the artwork, and the viewer’s horizon in then expanded, confirmed, challenged or changed.

Finding a secure ground for knowledge dominated early and middle twentieth-century philosophy. Positivism served for many as one viable alternative, in that while it might not secure metaphysical certainty about things it could at least establish the validity of terms of a given statement or argument. Others took to more pessimistic turns, positing that there were indeed no secure grounds for knowledge. The Sartrean leap into free choice and radical contingency seemed the most honest alternative. A middle ground appeared in several schools of thought, among them phenomenology. Phenomenological analysis is associated with the work of Edmund Husserl (1859-1938), as well as Martin Heidegger (1889-1976). Phenomenologists such as Husserl proposed an ontology of phenomena from which knowledge of essence, or reality, could be intuited. Particulars bore relationship to and provided entrance into the knowledge of generals. Of central importance is the act of perceiving phenomena, or as Husserl put it the ‘intentionality of consciousness.’

The battle cry of the phenomenological movement – ‘to the things themselves’ – was sounded by Husserl in his phenomenological manifesto ‘Philosophy as a Rigorous Science’ (1910). It is not as easy as it sounds; it is something, moreover, which a person must do for himself or herself; phenomenology is something to be done. First there is a purgative stage in which people must free themselves from hardened beliefs and theories… For phenomenologists, among the obstructions to ‘immediate experience’ is an acceptance of the simplified abstractions of science and its limited vocabulary as presenting the full picture of reality. Closely related to this is the restriction of all data to sense data, a refusal of access to any other possible data.[1] It is the emphasis on ‘the things themselves,’ on particular things, in all their textured quiddity that brings phenomenological analysis into partnership with theological aesthetics.

Aidan Nichols has contributed substantially to the advancement of theological aesthetics. He has done so in part through his three-volume analysis of the work of Hans Urs von Balthasar. But alongside this scholarship, Nichols has produced impressive work on other subjects related to aesthetics. In The Art of God Incarnate, Nichols writes:

It is fortunate, therefore, that the resurgence of a visionary art with teaching to offer in the modern epoch has coincided with the rise of a school of aesthetics which takes artistic experience seriously as a unique form of communication not to be reduced to some more general category less than itself. This ‘phenomenological’ school works with the philosophical method of the same name whose keynote is the self-discipline of the knowing agent before the object. As Martin Heidegger, a pioneer of this method, wrote in his early Being and Time, the being in question must ‘be seen as existing in its own self-disclosure.’ This re-direction of interest toward the object conceived in its own autonomy of existence is the more welcome in aesthetics since a rampant subjectivism has reigned there all too long.[2]

A phenomenological approach to the question of art and faith places emphasis on the purging of prejudices and presuppositions that so often cloud and obscure one’s encounter with and submission to an artwork’s potential impact.

Christians coming to an artwork can bring the virtues of attentiveness, hospitality, and contemplation that they’ve learned from piety, and re-learn these skills through encounters with art that can then be applied in their relationship with God.

In my own work, I am particularly interested in analyzing the mode of ‘self-disclosure’ that characterizes art. In Sense and Spirituality, I suggest that art is a complex and overlapping phenomena consisting of three analytically distinct but practically inseparable elements: craft, content and context. Art involves learned and practiced crafts or skills that include conventions and techniques that I and others often refer to as the ‘language’ of a given form of art.[3] Familiarity with the language of an artwork facilitates a greater connection with what it is doing.

Secondly, art involves content: the image on the canvas, the sound in the symphony, the tableaux and movements of a dance and what they seek to convey to the viewer. It is the subject-matter that an artist chooses to project through their craft, and in so doing insinuates a truth-claim upon its receivers. An artwork in effect says ‘You should consider x seriously, in spite of what you may have thought before.’

Finally, context refers to the situatedness of a given artwork or performance. Context involves both that of origin as well as reception. Postmodern criticism has bequeathed to us a heightened sensitivity to the social location of human activity, and while some modes of postmodern analysis can be shrill and reductive, it serves as a helpful corrective to immature or simplistic approaches to art. All art is implicated in its time and place and the experience of its creators as well as its receivers. Awareness of context assists in an effective ‘reading’ of a performance or work of art.

Art is a form of communication that requires effective connection. Understanding the dynamics of such connection is the way phenomenology illuminates how art can contribute to faith.