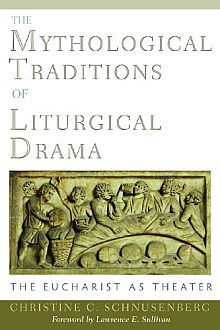 “In the beginning there was theater.” As the last chapter title in the book, this phrase provides a fitting thesis for the book as a whole. On one level, “in the beginning” refers to the cosmogonic myths—the creation myths—at the root of ancient cultures; myths transmitted and expressed through a plethora of rituals, festivals and practices. On another level, “in the beginning” refers to the theatrical reality already present in the most primal myths of ancient cultures. Theater was not something invented by the Greeks and Romans, but a common feature of daily rituals and the stories in which they are situated.

Drawing on the work of philosophers Mircea Eliade and Paul Ricoeur, Schnusenberg structures her thesis around the notion that all humans participate in a foundational (cosmogonic) myth; life becomes meaningful by integrating into a dramatic whole the past myth and present practices. Consequently, the relationship between the myth (muthos) and the participating in the myth (mimesis) is inherently dramatic. Humans are not spectators of these myths but become participants by reenacting the myth in sacred time (tempus) and sacred space (templus).

Schnusenberg explores several ancient cultures to demonstrate her thesis: Egyptian, Babylonian, Hittite, Canaanite-Ugaritic, Israelite, Greek, Roman, and finally, the rise of Christianity. She demonstrates remarkable research in each area, but as a Christian, I was most interested in her portrayal of ancient Israel and Christianity. Regarding Israel, she observes that the Genesis creation account resembles Egyptian cosmogony, both focusing on a mass of water and creation by word. She goes on to show how the creation account is refigured in the primary festivals of Passover, Feast of Weeks, and Feast of Tabernacles, pointing out their similarity to Canaanite agricultural feasts. Regarding Israel’s myths, Schnusenberg concludes: “The narrative of the historical acts of Yahweh constitutes an extraordinary drama” (105). Jesus can only be understood, therefore, within the plot-muthos of ancient Israel, and the Christ event as a whole “absorbs, expands, and augments” both Jewish and Roman cosmogonies and mimetic rituals (217). Consequently, Schnusenberg observes how disciples of Jesus were no different than disciples of other religions, given their imitation of the figure who embodies the foundational myth.

If the essence of Christianity and other religions is already dramatic, however, why were early Christians adamantly opposed to the Roman theater of their day? Although Schnusenberg addresses this in more detail in her earlier book Relationship between the Church and Theater, she deals with this briefly here by stating how the Christian and Roman religions are competing mythological traditions and liturgical dramas. In other words, Christians were opposed to the Roman theater not because they were against theater, but because of their commitment to participating in the theater of God. According to Schnusenberg, Christianity, like every other religion, is inherently dramatic, since all humans seek to make sense of the world by constructing myths and participating in these myths through dramatic rituals and practices. The difference between religions is, of course, the kind of cosmogonies and myths expressed in their beliefs and behaviors, but the common denominator remains the mythical-dramatic impulse of humanity.

As a work of comparative religion, this book is exemplary. Schnusenberg admits that the work of investigating the connection between religious myths and liturgical dramas has only begun, but her research is no doubt groundbreaking in the field. Anyone researching in this area will be absolutely delighted by the enormous bibliography covering eighty pages (279-359!). In addition, I applaud the overall thesis that all religions are inherently dramatic and concur that the mythic-mimetic paradigm drawn from Ricoeur is an appropriate avenue by which to explore this dynamic.

As a Christian, however, I have several strong objections to the overall thesis and several details of this book. For one, and perhaps most obviously, I am committed to the position that Christianity is not simply one myth among many, but the one true myth of the universe, the way things really are. As such, the story of King Jesus is not simply a myth similar to that of the Roman emperor, but challenges and subverts the Roman myth through Jesus’ exclusive and comprehensive claims to kingship. Unfortunately, Schnusenberg does not wrestle with these exclusive claims, and her cursory glance at the gospel stories of Jesus rounds off the rough edges and ignores their subversive character. Furthermore, she passes over the unique literary genre of the gospels and their historical claims, a point easily acknowledged by historians of any religion. Despite these shortcomings, at times Schnusenberg’s textual investigation produces insights that Christians could readily embrace, such as the cosmic implications of Jesus’ life and ministry.

In sum, Schnusenberg is right that the common denominator of all religions is a dramatic myth calling for active participation. But the major difference is that only one of these dramatic myths is actually true, bringing light and life to all who believe and participate. In the beginning there was theater, but not in generic terms. In the beginning was the theatrical, trinitarian God, who created a stage on which to act and humans to act in his image. And eventually, the triune God who is above all earthly drama, entered the drama as the Son, as a human person named Jesus of Nazareth. He is our model performance, our merciful Savior, and the only way, truth, and life.

Story is foundational to the Christian faith, and it is told through both words and illustration. When approaching children’s literature as a parent, the…