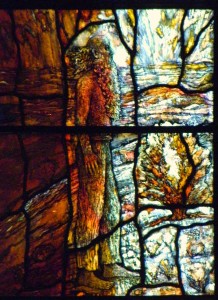 I am very grateful to my friend and colleague Michael Ward for bringing his incisive mind and expertise on the imagination to bear upon the neglected but important work of Austin Farrer (1904-68). Well-known for his book Planet Narnia: The Seven Heavens in the Imagination of C.S. Lewis (Oxford, 2008), Ward here turns his attention to a figure regarded by many as Lewis’s natural successor as a winsome apologist for the Christian faith and imaginative theologian.[1] Unfortunately, Farrer died only five years after Lewis, so if he indeed inherited Lewis’s mantle he had little time to wear it.  And, unlike Lewis, Farrer’s reputation basically died with him. So, although Rowan Williams has stated that Farrer was “possibly the greatest Anglican mind of the 20th century,” his brilliant and creative contribution to philosophy, theology, and biblical studies remains largely unknown.[2]

In two recent books I have tried my best to remedy this situation. In Solved by Sacrifice: Austin Farrer, Fideism, and the Evidence of Faith (Peeters, 2013), I argue that one reason why Farrer’s philosophical legacy has been neglected is that his commentators have focused mostly on his metaphysics, whereas by contrast I propose fresh attention to his epistemology. But I think that Ward is very wise to concentrate on yet another angle, namely Farrer’s groundbreaking work on the human imagination and in particular on images as media of divine revelation. Ward primarily draws upon Farrer’s classic 1948 Bampton Lectures, The Glass of Vision, to demonstrate Farrer’s conviction that “a man cannot apprehend anything without an act of imaginative creation.”[3] My own growing conviction that this slender book had much to offer a new generation of theologians who have rediscovered the imagination led to a volume in Ashgate’s series “Studies in Theology, Imagination, and the Arts”: Robert MacSwain (ed.), Scripture, Metaphysics, and Poetry: Austin Farrer’s The Glass of Vision With Critical Commentary (Ashgate, 2013). In addition to a critical edition of Farrer’s text, this volume also contains thirty-years’ worth of selected commentary by David Brown, Ingolf Dalferth, Hans Haugh, Douglas Hedley, David Jasper, and Gerard Loughlin.

While each of those six scholars (among many others who could have been included) has furthered Farrer’s legacy in various ways, I’d like to focus on David Brown as one of the most promising examples of a contemporary Farrerian approach. Farrer did not found a formal school of disciples, and Brown is certainly not a clone of Farrer (or anyone), but that’s precisely why I think that Brown’s critical and creative appropriation of Farrer’s work has so much to offer.

There are three different ways in which Brown has engaged with The Glass of Vision, in each case both endorsing Farrer’s basic insight and yet extending it further.

First, in “God and Symbolic Action” (originally published in 1990 and included in Scripture, Metaphysics, and Poetry, 133-47), Brown agrees with Farrer that there is indeed an analogy between poetic inspiration and prophetic inspiration, and that revelation can thus be mediated through symbols. But Brown notes that Farrer is reluctant to locate such inspiration and revelation within the sub- or unconscious, preferring instead to keep to the “luminous apex” of rational thought. By contrast, Brown argues that moving the process of inspiration (at least in part) to the sub- or unconscious solves several problems and opens up new possibilities for God to communicate with us without overriding our freedom of response. For example, in addition to the text of Scripture, God can use “natural symbols” as a universal language to reach all humanity.[4]

Second, in “The Role of Images in Theological Reflection”, Brown acknowledges the crucial significance of Farrer’s theory of divine revelation through images.[5] However, Brown points out that although Farrer speaks of “images” he really means verbal images conveying complex biblical typologies such as “Kingdom of God” or “Son of Man.” As I put it in my introduction to Scripture, Metaphysics, and Poetry, while “these verbal images may well conjure various mental images for those who read them or hear them described, and while they may well have first ‘come to’ Christ and the biblical writers as vivid mental images, it is as literary or verbal images that we readers encounter them—and thus, in Farrer’s theory, encounter supernatural revelation.”[6] Again, Brown grants Farrer’s insight and then pushes it further to include not just verbal but also visual images as means through which revelation can be mediated.  Thus, for Brown, not only written texts but paintings, photographs, sculptures, and films can be sites of revealed truth.

Third and finally, just as he wishes to extend revelation from verbal to visual images, Brown clearly also wishes to extend revelation beyond the confines of the traditional canon of Scripture. Thus, in “The Role of Images in Theological Reflection,” Brown admits that although “Farrer is not mentioned” in his books Tradition and Imagination: Revelation and Change (Oxford, 1999) and Discipleship and Imagination: Christian Tradition and Truth (Oxford, 2000), nevertheless in these two volumes Brown had “taken seriously [Farrer’s] stress on the power of images and their capacity to generate new meanings.  Where I differ is first in insisting that the process did not stop with the closure of the canon, and second in stressing the key role of factors extraneous to the texts themselves.”[7] Hence Brown’s distinctive position explored and defended at length in these and subsequent volumes.[8]

There are certainly other figures and ways in which the continuing legacy of Austin Farrer can be charted—see, for example, Stanley Hauerwas’s comments on Farrer’s influence on him while at Yale and his continuing appreciation for his work—but I hope that Ward’s essay and this follow-up will help more readers engage with this remarkably generative theologian.[9]

The Rev. Dr. Robert MacSwain is Assistant Professor of Theology and Christian Ethics at The School of Theology, University of the South, Sewanee, Tennessee, USA.  He received his PhD from the University of St Andrews in 2010.

[1] For an essay that looks at some broader points of comparison between these two figures, see Robert MacSwain, “A Fertile Friendship: C. S. Lewis and Austin Farrer”, The Chronicle of the Oxford C. S. Lewis Society 5 (2008), 22-45.
[2] See Rowan Williams, “General Synod: Debate on The Gift of Authority—Archbishop of Canterbury’s remarks” (13/02/04—exactly one day short of ten years before Ward’s essay!).  A good place to start for the novice who wants an overview of Farrer’s thought is Ann Loades and Robert MacSwain (eds), The Truth-Seeking Heart: Austin Farrer and His Writings (Norwich: Canterbury Press, 2004).
[3] Ward’s citation of Austin Farrer, The Glass of Vision (Westminster: Dacre Press, 1948), 114.
[4] This essay initially appeared in Brian Hebblethwaite and Edward Henderson (eds), Divine Action: Studies Inspired by the Philosophical Theology of Austin Farrer (Edinburgh: T&T Clark, 1990), 103-22. For a more positive reading on Farrer’s relation to the sub- or unconscious, see Douglas Hedley, Living Forms of the Imagination (London: T&T Clark International, 2008), 237-38.  Hedley’s book draws extensively on Farrer.
[5] Published in Douglas Hedley and Brian Hebblethwaite (eds), The Human Person in God’s World: Studies to Commemorate the Austin Farrer Centenary (London: SCM Press, 2006), 85-105.
[6] Robert MacSwain, “Introduction: ‘The form of divine truth in the human mind'”, in Robert MacSwain (ed.), Scripture, Metaphysics, and Poetry: Austin Farrer’s The Glass of Vision With Critical Commentary (Farnham: Ashgate, 2013), 5.
[7] Brown, “The Role of Images in Theological Reflection”, 92.  Technically speaking, Farrer is indeed “mentioned” in the second volume, but only in passing—in other words, his crucial role in inspiring Brown’s own stress on “the power of images and their capacity to generate new meanings” was left implicit until this essay.
[8] For a broader analysis of Brown’s arguments here and on many related areas of concern, see Robert MacSwain and Taylor Worley (eds), Theology, Aesthetics, and Culture: Responses to the Work of David Brown (Oxford: Oxford University Press, 2012).
[9] See Stanley Hauerwas, Hannah’s Child: A Theologian’s Memoir (Grand Rapids: Eerdmans, 2010), 52 and Approaching the End: Eschatological Reflections on Church, Politics, and Life (Grand Rapids: Eerdmans, 2013), 6.

Image Credit: Detail of Moses at the Burning Bush from Thomas Denny’s Transfiguration Window (2010), Durham Cathedral, photograph by Robin Croft © 2011. From the cover of Robert MacSwain (ed.), Scripture, Metaphysics, and Poetry: Austin Farrer’s The Glass of Vision With Critical Commentary (2013).