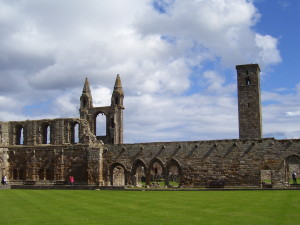 In Visual Faith, William Dyrness entertains two questions concerning the uncomfortable, and at times awkward, relationship between beauty and goodness. The first: “Do pursuits of justice and beauty compete for our attention?”[1] And the second: “How can I enjoy quiet moments of beauty when the world is full of suffering?”[2]

As a PhD Candidate working in an office that overlooks the St. Andrews Cathedral, questions like these have been lurking in my mind; particularly as increased media attention is given to war and religious persecution in the Middle East. Put simply: I have more recently felt the tension between my interest in beauty and the extreme forms of injustice which are “a kind of ugliness” – a distortion of beauty and of hope.[3] Dyrness argues that “both values belongs to the call of the Christian.”[4] The question I want to address here concerns the role that the imagination plays in trying to bring these two, at times opposing values, into conversation.

Early suspicion of the imagination can be traced through the ancient Hebraic and Hellenic narratives which tended to see the imagination as deceptive, thus widening the gap between beauty and goodness. Richard Kearney, for example, points to the Adamic and Promethean narratives to illustrate why the “imagination is characterized by an act of rebellion against the divine order of things; it dismantles the harmony of nature as pre-established by the gods.”[5] He adds: “It is thus marked from the outset by an essential ambiguity.”[6] More well known, perhaps, is Plato who understood forms of imitation “at third remove from the throne of truth,” but the contemporary situation seems to be much more concerned with the constructive imagination, where all meaning is created; thus, challenging the divine origins of the imagination.[7] Kearney rightly observes that “deprived of the concept of origin the concept of imagination itself collapses.  For the imagination always presupposed the idea of origination: the derivation of our images from some original presence.”[8] What distinctions need to be made for an understanding of the imagination working somewhere between the representative and constructive, or even unifying space?

According to Patrick Sherry, it was Samuel Coleridge who advocated a “distinction between imagination and fancy.”[9] According to Sherry, “fancy consists in rearranging things in new combinations,” characteristic of a “memory emancipated from the order of time and space.”[10] At the same time, James K.A. Smith comments, “I do think it is crucial that we be able to imagine the world otherwise than how we ‘receive’ it.”[11] So there must remain creative tension between new configurations and past developments. For Coleridge, the imagination was “not a part of the mind, but rather the whole mind working in a certain way, involving perception, feeling, and reasoning.”[12] Sherry suggests that, even going beyond the creative arts by making connections between the imagination and inspiration, people can be given “a new moral vision.”[13] Political leaders, for example, need the imagination to envision a different world.  On Sunday, I was reminded of this relationship between beauty and goodness, while listening to someone pray along these lines, “please, Lord, give us leaders with the creative imagination to help bring resolve where there is injustice.”  In this light, the imagination pulls beauty and goodness a little closer together.

Timothy Allen and his family reside in St. Andrews, Scotland, where he is writing his PhD dissertation under the supervision of Professor David Brown.  Currently, Tim’s research focuses on the dialogue between theology and popular culture – more precisely, on the role of the imagination in theological constructions of the doctrine of heaven.

Tim earned his PhD (2016) as a member of the Institute for Theology, Imagination and the Arts at the University of St. Andrews, Scotland under the supervision of Dr. George Corbett and Prof. David Brown. Tim's forthcoming book project is based on his dissertation research with the preliminary title: Heaven and the Popular Imagination; due to be published sometime in late 2017, or early 2018 by Wipf and Stock Publishers. Tim currently serves as an adjunct professor of theological studies at Multnomah University/Seminary Reno-Tahoe campus and will assume the position of Senior Pastor of New Life Foursquare Church at Incline Village, Nevada in April 2017.

As anyone with a strong theology of creation will agree, art, at its best, presents us with a unique vantage point on God’s Truth,…