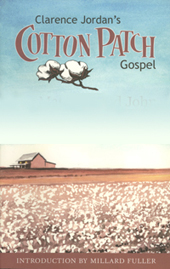 There have been many translations of the Bible, one of the most famous being The King James Version, for which Transpositions is celebrating its 400th anniversary. But today, I want to introduce you to a lesser-known translation: The Cotton Patch Version, written by Clarence Jordan, a farmer, New Testament scholar and founder of Koinonia Farms in southwest Georgia, along with its subsequent adaptation to stage by actor Tom Key: The Cotton Patch Gospel.

In this version, Jordan sets the Gospel story in the state of Georgia (USA). Jesus is born in Gainesville, flees to Mexico during the killing of the innocents, preaches the Sermon on the Mount atop Stone Mountain, eats the Last Supper at a motel in Unadilla, goes back to Atlanta for his trial, and is crucified (lynched in the play version) at the Lee State Prison in Leesburg (a thirty minute drive from where Jordan lived at Koinonia Farms). In addition to the locations being changed, the language reflects the rural setting and many of the details are translated to things more appropriate to Georgia. For instance, the food is changed to Southern fare, and many of the disciples’ names are changed to similar sounding, yet Georgia-appropriate nicknames—Judas becomes Judd, Peter is nicknamed “Rock.”

Being from South Georgia myself makes this version of the Gospel hit close to home. I know the places it references (for instance, I grew up a mile down the road from Lee State Prison, I was once stranded in Unadilla when my car broke down, and I lived in Atlanta for five years). It’s a similar feeling, perhaps, to what the Florentines might have felt when they viewed the many Crucifixion scenes set in Florence during the Renaissance. It makes the gospel story more real, helping me to imagine its impact in our current setting. But how might the Cotton Patch Gospel be perceived outside its setting? If you are from California or Scotland or Moscow, would it just result in a manner of confusion? 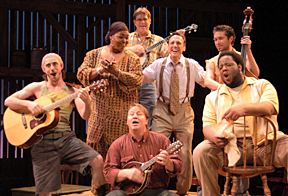 I can begin to answer this question, I think, by relating my recent experience of seeing the stage version performed at the Edinburgh Arts Festival in August. My experience there was a bit surreal and even slightly unsettling. I, a south Georgian, was watching a South Georgian translation of a first century Middle Eastern text, translated again into an Atlanta-based play, performed by university students from Pennsylvania – in Scotland! What I was struck by most was the lack of subtly the play had so far removed from its context. Aside from the awful Georgian accents my Northern friends put on and mispronunciation of place names like Cordele and Unadilla, it seemed too overblown, too caricature-like to move me in the way it does in my own personal reading of the translation or if I were to see the play performed in Georgia by Georgian actors. The need for context seemed to cry out louder during the show, and I wished I were home again to experience it in its proper place. If I felt unmoved by the play so far out of its context, then surely someone who had no association to Georgia would find it trivial, even if slightly amusing.

This made me think about the role of translation more widely. The King James Version, no doubt, has had impact far beyond its own context and years. But now, many people find it hard to read and troublesome to understand. Is translation just doomed to failure when taken too far out of its context? The answer, I think, is both yes and no.

Scripture, after all, is the Word of God. If the message didn’t translate well into various contexts, it wouldn’t be the “message for all the nations.” But if the Gospel is special in this regard, then why do I think the Cotton Patch Gospel on stage failed to communicate appropriately in Edinburgh?

That, I think, is more a matter of the art itself. I was left thinking that the performance lacked the artistic detail to do what it set out to do—that is, to communicate an updated and contextualized Gospel story. But great art has more lasting power. A more professional stage play I think would have communicated the beauty of Jordan’s translation better. It would have done it justice as a piece of art. The King James Version, no doubt, gives the Gospel story artistic justice, and this has been proved in its power and appeal for the past 400 years. Even if many find it outdated, it still moves many of its readers and communicates the beauty and love of Christ in its often-lofty language.

So, yes, I think context matters immensely, and as Christians, I think it is our job to figure out how to contextualize the Gospel in the most artful way possible. Clarence Jordan, in his attention to Georgia as a place he knew and loved, was able to write a translation that is both powerful and beautiful. But even art that is placed or contextualized well doesn’t mean it will communicate to everyone at every time. It does, however, speak universally and truthfully to the desire to place ourselves in the Gospel story, to discover our own context—whatever that may be—in the drama of salvation, and to see the beauty of Christ in the world we live in. The Cotton Patch Gospel and Play does this for me. Are there any contextualized or updated versions of Scripture that you enjoy?