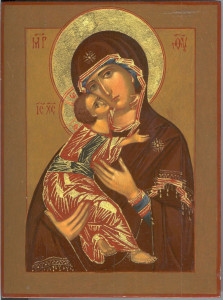 Last May, two of my best friends and I went to see The Avengers at the cinema near our university. I should disclose from the start that I am not necessarily the target audience for the film. I like my superhero movies to have a more Nolan flavour, for evil not to walk around wearing golden mammoth tusks protruding from its forehead. Nonetheless, I went along for the company, the direction of the beloved Joss Whedon, and the cultural obligation—as an American, I grew up on the cartoon series of these figures as part of my Saturday morning routine along with bowls of sugary cereal.

I may have already been rolling my eyes ten minutes into the film—Natalie Portman’s role in Thor so soon after her disturbingly excellent work in Black Swan had permanently damaged my ability to watch a Marvel film seriously—but there was a particular scene I found arresting.

When we are first introduced to Black Widow, a few stereotypical Russian thugs in a nondescript Russian building somewhere in Russia are holding her captive. The emphasis on Russia here would not be important if it weren’t for the momentary cut away where we observe the scene through a mirror balanced atop a crate, flanked by icons of the Theotokos.

There, in the middle of a light-hearted superhero film—the Virgin Mother bearing the Christ Child.

Her presence is so understated that it is likely safe to conclude that director Joss Whedon, no novice to using religious images outside of their context, placed the icon next to the mirror as part of the Russian scenery. How do you communicate that a building is in Russia? Place a Theotokos next to a man holding a handle of vodka.

The icon does not appear to serve any sort of purpose in the film. This is not Baz Luhrmann’s Romeo + Juliet, in which the superabundance of religious iconography raises the question of its meaning. Rather, The Avengers lets this overt Christian reference slip by without paying notice to it and the film progresses without reference to it whatsoever.

While it would be easy for me to pan other aspects of the film’s flippancy—when Loki appears in Germany, he speaks in English and everyone seems to understand him just fine—I’d like to speak specifically to the contrast between the Theotokos and the reaction of the audience in my cinema.

Perhaps the same was true for you, but when the Hulk smashed Loki to the ground, violent cheering erupted from every age in the screening I was in.

To be fair, the simple triumph of good over evil is something to celebrate, but is it possible that the accidental inclusion of the Theotokos is asking us to consider an alternative reading? Perhaps it has something to do with growing up, emotionally and theologically.

I no longer eat bowl after bowl of sugary cereal and I no longer spend my Saturday mornings watching superhero cartoons. There’s good reason. Superhero cartoons and superhero movies of the same vein espouse an interpretation of the world in which good and evil are clearly defined, even when for short moments it seems not as transparent. Unrealistic idealism. What the Nolan films achieved was a distinctly grey worldview. Unrealistic realism.

The Theotokos exists in a real world that is caught in such grey, in which even the righteous are in need of redemption, even as she was in need, and therefore bore God within her. As, the icon attests, we are to do ourselves.

The Avengers presented a world in which salvation was in the hands of a group of heroes that, their job done, left the people to go about their business. The Theotokos represents a worldview in which the Saviour left us to become like Him, to share in Him, as Mary exemplifies to us.

It is not my intent to Hulk smash The Avengers, but is it possible that these sorts of films reinforce to us a salvation narrative in which we do not directly participate and, at the same time, fail to teach us that the world is far less black-and-white than Saturday morning nostalgia would like us to believe?