[EDITOR’S NOTE: As our series on The Art of Lent: A Painting a Day from Ash Wednesday to Easter by Sister Wendy Beckett concludes, Kevin Antlitz reflects on the light of the resurrection glimpsed in paintings by Caravaggio. For more information on Sister Wendy and this series, see our Series Launch.]

‘When Jesus of Nazareth died the horrible death of crucifixion at the hands of the Roman army, nobody thought him a hero. Nobody was saying, as they hurriedly laid his body in a tomb, that his death had been a splendid victory, a heroic martyrdom…. Nothing had changed. Another young leader had been brutally liquidated. This was the sort of thing that Rome did best. Caesar was on his throne. Death, as usual, had the last word’. [1]

In his book The Day the Revolution Began, N. T. Wright explores the meaning of the cross of Jesus Christ. He accurately describes how the world initially viewed the crucifixion of the itinerant preacher and miracle worker named Jesus of Nazareth. In a word, it would have been seen as an abject failure. Another rogue zealot played the messianic game and lost.

This perspective is the context for the subject of Caravaggio’s painting The Supper at Emmaus, 1601. In this painting of oil on canvas, the Italian baroque painter, Michelangelo Merisi da Caravaggio, interprets the story at the end of the Gospel of Luke where Jesus appears to two disciples on the road to Emmaus. In this scene (Luke 24:13-35 ESV), two of Jesus’s followers are skipping town on the Sunday after the crucifixion. Having just heard the testimony of several women who claimed to talk with a pair of angels announcing the resurrection of Jesus, they, along with the others, dismissed this as an ‘idle tale and they did not believe them’ (v. 11). The tomb was empty but a living body they did not see. The game was up. The promise of the way of Jesus was a lie. The men were disillusioned and they were done. Giving up hope that the prophecies might be fulfilled, they left the dissolving band of disciples and fled Jerusalem.

As they walk along the way to Emmaus, the freshly re-minted Jesus catches up to two of his former students. The narrator tells us that they are prevented from recognizing Jesus. Playing a bit coy, Jesus asks what it is they are discussing as they walk. Jesus feigns ignorance and the men are incredulous. ‘Are you the only visitor to Jerusalem who does not know the things that have happened there in these days?’ they ask (v. 18). The two then proceed to recount the story of Jesus of Nazareth, a man who was a prophet and a would-be redeemer of Israel who was just executed by Rome. It is now Jesus’s turn to be incredulous: ‘O foolish ones, and slow of heart…’ (v. 25). Jesus proceeds to school them as, ‘beginning with Moses and all the Prophets, he interpreted to them in all the Scriptures the things concerning himself’ (v. 27).

The three continue to walk together and eventually arrive at their destination. Jesus is almost ready for the big reveal. Hungry from the journey, they sit down to eat together in Emmaus, and the Good Doctor writes: ‘When he was at table with them, he took the bread and blessed and broke it and gave it to them. And their eyes were opened, and they recognized him’ (vv. 30-31a). This is the precise moment Caravaggio masterfully captures in The Supper at Emmaus, 1601, with its shocking sense of wide-eyed and wide-armed astonishment. 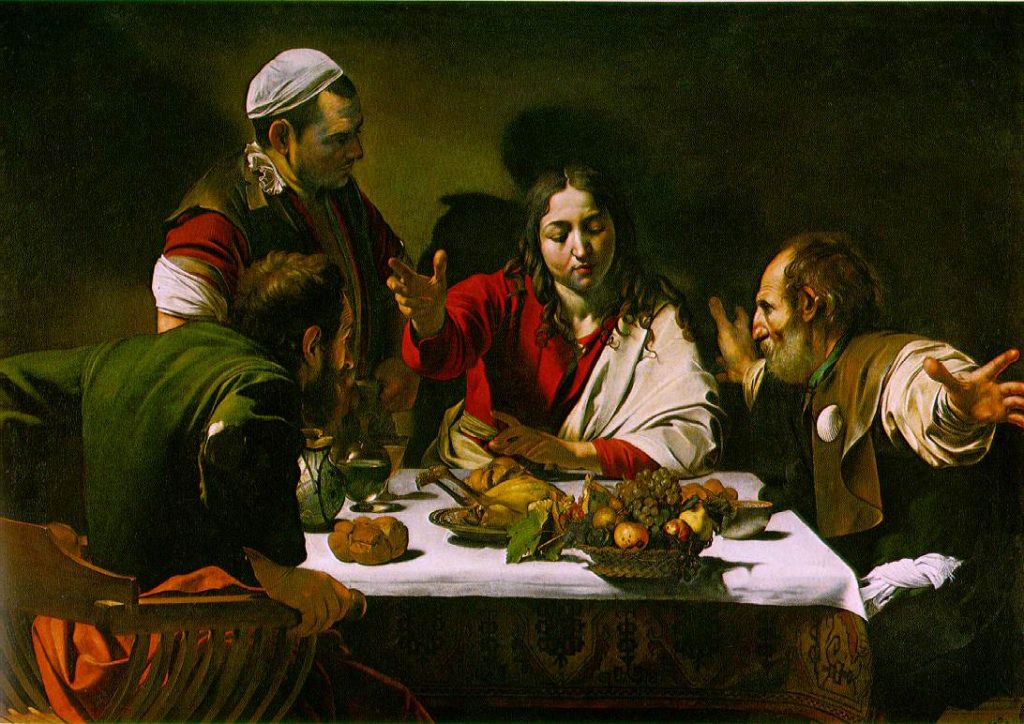 In what follows, I want to comment on the painting, highlighting not only the ways in which Caravaggio is an astute reader of the Bible but how reading his painting aids our own interpretation of the Scriptures. 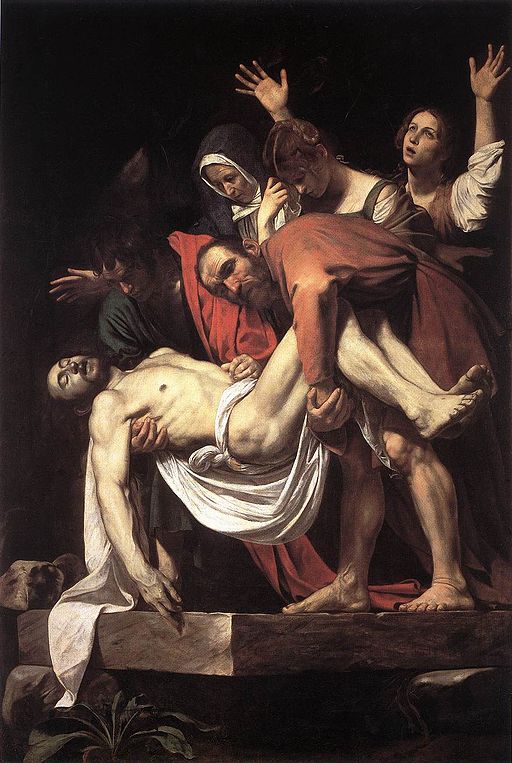 First, some background on Caravaggio’s distinctive style. The Supper at Emmaus, 1601 embodies the characteristic features of the master’s oeuvre. For example, we see Caravaggio’s use of common, roughhewn subjects plucked from the fields or brought in from the streets rather than the idealized figures used by his classical predecessors. [2] This painting is also a fine example of his use of perspective that invites the viewer into the scene. His use of perspective has a similar effect to that in his The Entombment of Christ (right). In The Supper at Emmaus, 1601, this biblical scene is transposed into the visual language of Caravaggio’s day, including the exquisite example of a still-life scene popular during his day (more on this in a moment). One can only guess what his contemporaries would have thought, but it is not hard to imagine that it would have the effect of bringing this gospel story to life. Good art can have the effect of translating the ancient Scriptures into a contemporary idiom such that what happened ‘out there and back then’ is experienced as if it is happening ‘in here and right now’. [3] In fact, it is as if the left hand of the astonished disciple is pulling the viewer into the scene, belly-up to the table, rescuing the bowl of fruit before it falls to the floor.

I want to go back to the still-life, upon which Jesus’s gaze is fixed. Careful analysis of the technical features of the work reveal that this was one of Caravaggio’s most deliberately planned and highly finished paintings. [4] Caravaggio devoted a surprising degree of attention to detail on the table setting, so much so that some of his contemporaries may have criticized the inclusion in the center of the canvas that almost demands your attention. The still life could be seen as an unnecessary distraction or an example of Caravaggio’s overt repudiation of classicism in favor of realism. Instead, the focus on the meal indicates that Caravaggio is an astute reader of the Gospel of Luke. In this gospel, two of the most critical moments of Jesus’s self-revelation occur around meals where Jesus takes, blesses, breaks, and gives bread to his followers. This includes the feeding of the five-thousand (Luke 9:10-21) and the Last Supper (Luke 22:14-23). The same pattern holds true for this supper at Emmaus. Jesus seems to reveal himself most fully during meals with his disciples, thus making this a fittingly Lukan painting.

Perhaps what Caravaggio is best known for is his dramatic use of light and darkness. He is the pioneer of tenebrism (from the Italian tenebroso, meaning dark, somber, or mysterious). This is a painting device that produces a dramatic effect by starkly contrasting light and dark, known as chiaroscuro (again, Italian for ‘light-dark’). The chiaroscuro in The Supper At Emmaus, 1601 is vintage Caravaggio; however, on the whole the scene is brighter than many of his other paintings. It is brighter, even, than his painting of the same scene created some five years later in Milan (pictured here). The brightness of our painting, the 1601 version, is especially fitting for the subject. 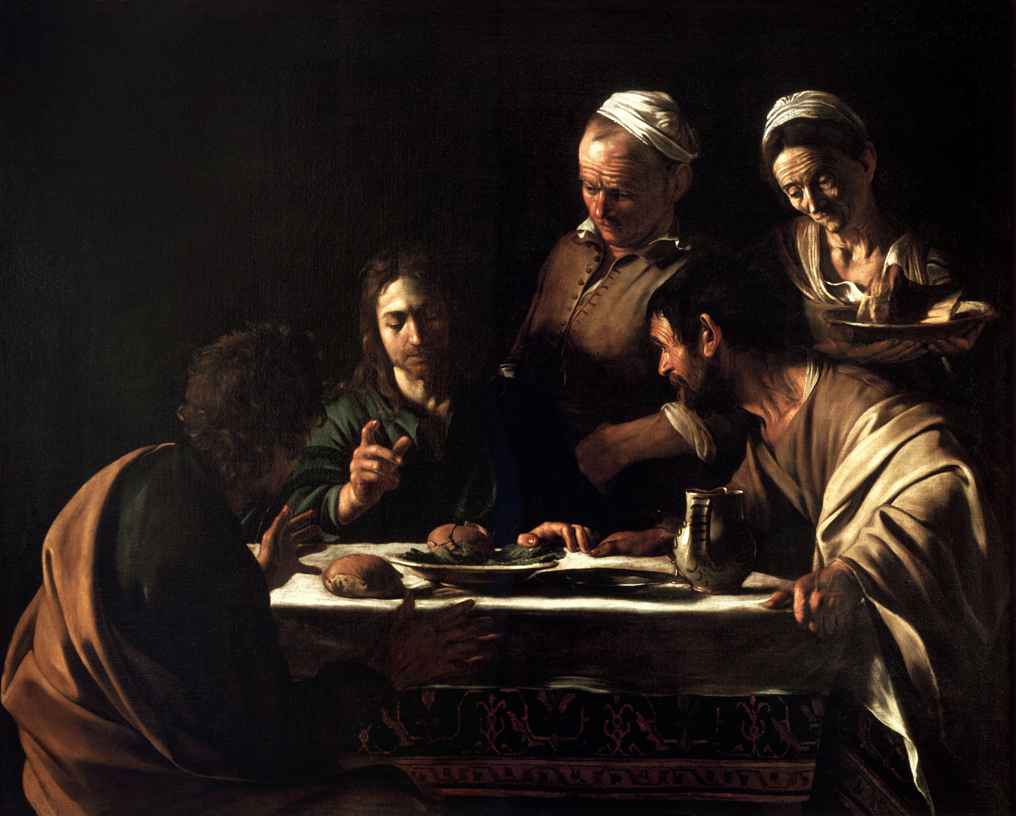 Caravaggio paints the scene with a bright illumination in what would have been a dark room at night. We can see no candle or flame. It is Jesus himself who irradiates the scene. Caravaggio’s brush strokes indicate that the prophecies are coming true. Jesus was born, killed, and then raised ‘to give light to those who sit in darkness and in the shadow of death, to guide our feet into the way of peace’ (Luke 1:79), and to be ‘a light for revelation to the Gentiles, and for glory to your people Israel’ (Luke 2:32).

Jesus not only enlightens the two disciples about the meaning of the events of the past few days, he also illuminates the Scriptures, re-read from the horizon of the resurrection. In fact, what this painting reveals is that in light of the resurrection, everything is illuminated. Dark is giving way to Light. The tomb is empty. The Son has risen. It is the dawn of the Eighth Day. Everything is beginning to make sense. All things are being made new.

Caravaggio, The Supper at Emmaus, 1601: https://commons.wikimedia.org/wiki/File:Supper_at_Emmaus_by_Caravaggio.jpg.

Caravaggio, The Supper at Emmaus, 1606: https://commons.wikimedia.org/wiki/File:CaravaggioEmmaus.jpg.

Story is foundational to the Christian faith, and it is told through both words and illustration. When approaching children’s literature as a parent, the…