[Editor’s Note: In the second reflection on Sister Wendy Beckett’s The Art of Lent: A Painting a Day from Ash Wednesday to Easter, our anonymous contributor examines the theme of ‘Humility’ and Beckett’s selected Rembrandt and Goya paintings, and offers a personal reflection on the impact of this theme. For more information on Sister Wendy and this series, see our Series Launch.]

When I was a younger person and people complimented me on an accomplishment of mine, I would respond, ‘It’s not that good’ or compare mywork unfavourably with someone else’s. I thought that deflecting praise and belittling myself was the way to show humility. After doing this for quite some time I had a realisation: this was actually false humility. True humility would be to give praise where praise is due. I could say ‘thank you’ to the compliment because it was likely true but in the same breath acknowledge that this gift came freely from God. I could not take credit for something given to me, but I must also acknowledge that I do indeed possess this gift.

In Rembrandt’s The Return of the Prodigal Son, the younger son comes home with a well-rehearsed script about how he is no longer worthy to be called a son. He thinks that becoming one of his father’s lowly servants is the only proper way to atone for what he has done. His father, however, does not even let him finish his speech. He refuses to let the son abase himself any further. Whenever we, as sons and daughters of God, either purposefully or unconsciously focus on our self-perceived worthlessness, He won’t hear of it. 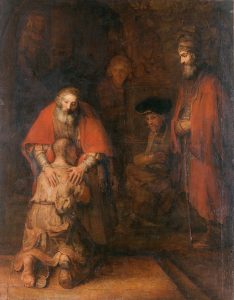 Where exactly do we stand before God? In Isaiah 41:14 God tells his people, ‘Do not be afraid, O worm Jacob; little Israel, do not fear, for I myself will help you’, but Psalm 8:5 says that ‘You have made them a little lower than the angels and crowned them with glory and honour’ (NIV). There seems to be quite a lot of area in between. In 1 Peter 5:6, the instruction to ‘humble [ourselves], therefore, under God’s mighty hand’ is immediately followed by the encouragement ‘that he may lift you up in due time’. It seems that selling ourselves short or thinking less of ourselves in an effort to be humble isn’t the best use of our time. Humility relates to a right understanding of our status in God. In true humility we understand just how much we mean to Him though unashamedly acknowledging how undeserving we are.

When I read accounts of people who were deeply injured and horribly wronged by others nonetheless forgiving their tormentors it fills me with a certain degree of ‘righteous’ anger. In some way forgiving seems to lessen the impact of the suffering; at times it may seem almost unfair. The older brother in Rembrandt’s painting perhaps shares my feeling. He stands aloof to the side of this touching reunion scene, robed in the same red as his father. The younger son’s head is nestled tenderly into his father’s breast, his flimsy sandal having just fallen off. It is easy to shrug off as mere jealousy the older brother’s objections to his father’s forgiveness. But maybe the older brother is feeling a bit protective of his father: how can he abase himself so? How could he have so blithely taken the younger son’s shame onto himself? Where are the consequences for the younger brother’s actions? To me this painting speaks as much of humility as it does of forgiveness. How far down does the father stoop to receive the prodigal son and how much further down must the older brother go before he can forgive as freely as his father?

In Goya’s painting Self-portrait with Dr Arrieta we see pictured our humble condition. Goya sits up in bed, eyes closed and head tilted back. His friend Dr Arrieta supports his neck and is offering him medicine with a gentle yet concerned look. Sister Wendy comments on this painting:

‘It is this clear, hard, realistic look at ourselves that we all need. But Goya also shows that he is not alone. His beloved doctor friend is with him, comforting him, healing him, in fact saving him. Skillful though Doctor Arrieta was, his very look of anxiety reveals that he knows that he is not all-powerful. But our doctor, our Saviour, is all powerful’. [1] 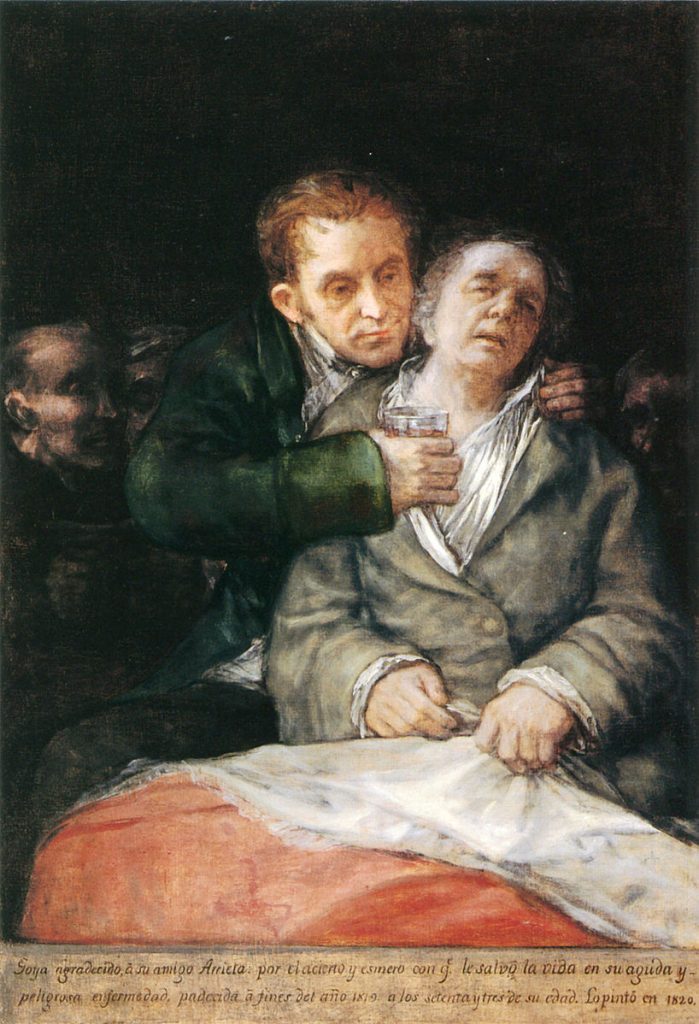 For some of us, it takes physical suffering to fully grasp this concept. There are numerous biblical examples, but I will share one of my own. As a teenager, I took part rigorously in two sports, taekwondo and running. I began taekwondo lessons at about age thirteen and continued for seven years, earning my black belt around age fifteen. I toyed with a fantasy of competing in the Olympics someday, but even then I knew it wasn’t feasible. Still, I wanted to become the best I could, so I took part in competitions, trained very hard and joined my university taekwondo team—quite a serious commitment. I began long distance running at age sixteen after joining my high school athletics team and quickly it became something I enjoyed doing in my free time, even at university. In the process of dedicating so many hours and so much effort to my training in both sports, I became secretly proud of how much I had been able to improve and accomplish. This was wrapped up with a growing dependency on the rigorous self-discipline required to maintain a certain level of fitness and nutrition. I started to become more and more rigid in my exercise regimen and in what I ate as a way to have some control over events in my life, especially when life felt unpredictable and difficult. It slowly became apparent that athletic accomplishments and self-image were becoming more important to me than many other things, though at the time I was also spending two hours every day reading the Bible and praying. By the time I was about nineteen, I had developed a full-blown eating disorder in addition to exercise bulimia. This wasn’t just a problem of needing to control events in my life when I felt powerless, I realised. A key prerequisite for an eating disorder is self-loathing. And beneath this was, deep down, pride. This was me telling God that I didn’t like how he had made me and what he had planned for me, so I was going to forge my own way.

My self-loathing was pride, as unlikely as it seems, because I stubbornly valued my opinions about myself more than I did God’s esteem. Anytime I focus on myself so exclusively, I am taking away from the praise rightly due to God.

Then something happened that changed my situation for the better. I tore my meniscus, the cartilage that cushions the knee. It required a surgery. Suddenly, I found myself lying in bed in terrible pain and unsure of the next time I could be active again, to ‘be myself’. There I was, like Goya, sitting in bed, with God leaning over me to give me medicine. The Lord’s gentle voice told me that he needed to get my attention and that things needed to change drastically.

I eventually recovered and went back to my taekwondo at a higher level than before. Things didn’t actually change all that much initially, it turns out, as I slipped back into my old behaviours. I tore the same meniscus again. Following the second surgery I realised I could not practise taekwondo or run long distances any more. It was over. This time you would think I would have learned my lesson. Yet with the ability to exercise gone, I still had my eating habits I could control. It took a full year of prayerfully wrestling with God every day for me to fully relinquish that pride. One day when I was walking and praying, I physically felt God lifting a massive weight from me. That eating disorder has not had a hold on me ever since. Self-esteem is still a work in progress – always a striving towards looking upward and outward at God more than at anything else. If I truly believe that God is all powerful, I must exhibit this belief in my life.

May we see ourselves in the Prodigal Son, who disgraced himself yet joyfully accepted the complete forgiveness offered him, and in the self-portrait of Goya, who leans back into the arms of the Great Physician in complete trust.