[EDITOR’S NOTE:  Continuing our series on The Art of Lent: A Painting a Day from Ash Wednesday to Easter, by Sister Wendy Beckett, Ashley Mowers offers insight and reflection on the theme of ‘Confidence’ for the fifth week in Lent.  For more information on Sister Wendy and this series, see our Series Launch.]

When volunteering for The Art of Lent reflections, my hand shot up for ‘Confidence’, partially in an attempt to embody a quality I often sorely lack. After acquiring the book several weeks later, I kicked myself for being so hasty. I felt confident alright- confident in my complete initial revulsion at the first painting, Interior with Open Window, by Raoul Dufy.

Often, we are afraid to approach art on our own terms and instead wait to be told what the ‘right’ response to a piece should be. I realised that when I first approached Dufy’s work, I assumed there was a problem with me. I immediately invalidated my opinion before investigating further. I put off this article for weeks due to ‘analysis paralysis’. How could I admit to disliking a work of art on an arts website? I breathed deeply and reviewed Sister Wendy Beckett’s words: ‘The experience of joy leaves behind it an awareness of our personal freedom’. [1] Well, time to exercise it.

How garish! How audacious! How… exactly like a Fauvist. For those unfamiliar with it (as I was all of thirty minutes ago), Fauvism is known for its thick, bold brushstrokes and emphasis on the expressive nature of colour. Rather than applying it according to the subject’s natural appearance, it was applied capriciously to conjure stronger emotions. As you now know, Dufy certainly succeeded in doing so with me. When showcased at the 1905 Salon d’Automne in Paris, a critic called the artists ‘wild beasts’, or ‘les fauves’, and thus their movement was born. [2]

Ultimately, I envy the recklessness of these brushstrokes. So much of me wants to tidy it up, contain the indigo within the windows. I want to walk in and start adjusting furniture and give the floor a quick sweep. ‘The space we occupy may be as in the painting, cluttered and even oppressive, but after joy it is no longer imprisoning’. [3] I realised what bothers me about the painting was that I do feel oppressed by it. It isn’t that it is too colourful, or playfully disproportionate, it’s that the gaze is confined to that space despite the dangling hope of freedom outside. I don’t want to be in this room, with Dufy’s impractically tiny yellow chair and decorative lintel. I want to be outside exploring or in the back room investigating. As a theatre practitioner, I am constantly evaluating space for its performative potential. While this interior has potential, it does not reside in this room alone. Dufy’s painting entices me to consider three distinct opportunities: an ocean-view balcony, the back room with an easel, and what appears to be a walkway to the city beyond. What I would give to just move the vase of calla lilies off the table so I can see into the mysterious back room more easily. Just what else is back there, in that room with the easel? Who lives here? Where are they, and why did they leave the windows open?

This may be both Dufy’s and Sister Wendy’s point- we’re not meant to stay in the room, and the impulse to press past the boundaries of the painting is the desired effect. Leaving stifling environments can be difficult. Perhaps the familiarity is comforting. Maybe the love you bear the people involved leaves you with a sense of duty, or you feel some sense of responsibility for ‘getting into this mess in the first place’. That first step out can feel impossible, but keeping your eyes on the freedom ahead can be the little nudge needed to step out with courage.

Oh, how I empathise with Gilles. Here he appears to stand alone, alienated, egg-on-face. In performance, there are innumerable opportunities to humiliate oneself. Once, after landing a tinsica in a dance break during a rehearsal of Joseph and the Amazing Technicolor Dreamcoat in high school harder than I should have, I bruised my right foot considerably. Despite cautioning from our choreographer, I was over-confident in my ability to work through the pain instead of adapting the move for my safety. On opening night, I landed the tinsica just fine, only to crumble during the simple cartwheel following, nearly taking my partner down with me. To make matters worse, we were the lead dancers of that ensemble, and thus front and centre. 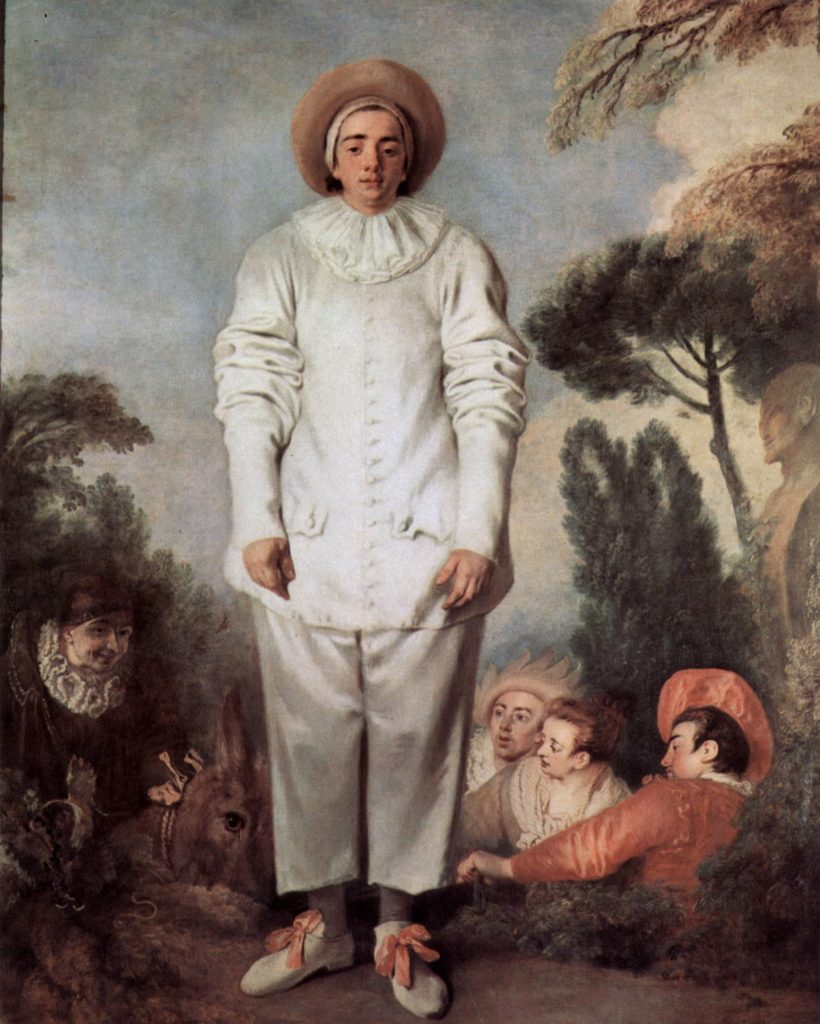 Oddly, the presence of Murphy’s Law is exactly the reason theatre has always been my favourite art form. Despite its reputation, theatre has the capacity to consistently remind you of your own limitations, and thus, keep you humble. The choices you make directly affect the community in which you participate. Had I listened to the leaders in my community at that time, I might have avoided kicking Doug in the face.

And yet, the show must go on, and luckily the scene Gilles appears to be in does not seem quite as violent as mine was. He is clearly performing in some Italian farce – ‘Gilles’ was a popularised Zanni character (comedic servant) in the Italian theatrical style of commedia dell’arte. Il Zanni was meant to be played as a clever trickster, impish and proud. They jest, they prank, and they are often more than a little haughty. Here we see a Zanni who is anything but. Other stock characters (Il Dottore riding a donkey to the left, Il Innamorati just right of center, and the stylish Capitano in red) interact behind our tragi-comic subject, possibly readying themselves for the next scene.

Those behind the subject appear to embody their stock characters despite not having made their entrances. Il Dottore already looks like he has been deep in his cups, face full of foolishness and with the fitting familiar to boot. Il Innamorati appear startled, perchance interrupted mid-embrace. The Capitano takes up his allotted space, leading the donkey with the braggadocio only he can provide. Above them all, Gilles looks out at his audience, resigned to his role.

Il Zanni without mirth is no Zanni at all – and Gilles is not suited for his role. His costume is ill-fitting – both too long in the arms and too short in the legs. Perhaps this is an understudy filling in for the first time. Perhaps he was unwitting and unwillingly cast, and for the sake of the troupe, goes on regardless. Despite the circumstances, however, he doesn’t stand defiantly, arms crossed, and scowling. Nor does he appear afraid, looking down and away. He plays his role to the best of his ability, looking up and out to his audience, ever-present in the moment.

Or maybe he isn’t playing his role at all. The figures behind him personify their roles almost too well, despite their entrances not being made yet. Gilles’ gaze is defiant – he does not suit the role in which he is cast, nor does he want to. He dares the viewer to put him back in his place, adorn himself with the appropriate mask, and play the suitable clown. Watteau’s figure rebels against the confining boundaries of his role and against the narrative the painter has created for him. Gilles is a figure of two components of courage: humility and nerve. This Zanni demonstrates a different form of cunning, and Watteau tests the boundaries of that popular line: ‘All the world’s a stage / And all the men and women merely players’. [4] Here the painter includes those one could consider ‘merely players’, and one Zanni who is anything but.

Perhaps the joke isn’t on Gilles, but instead on us. On those of us too anxious, like with Interior with Open Window, to test the limits of our ill-fitting confines. Sister Wendy encourages the reader to press on with humble confidence, the kind that is mindful of others and acknowledges our limitations. With her choices of Dufy and Watteau, we are urged to keep our eyes fixed on the beyond, confident that our current circumstances are not the end. . . and do not define us.

[4] William Shakespeare, As You Like It, Act II, Scene VII.

Ashley Mowers is currently an MLitt student at the Institute for Theology, Imagination, and the Arts in St Andrews. There she is researching the use of religious language and postures found in the plays of Samuel Beckett. When she is not studying, she co-hosts The Min/Max Podcast with her husband, Allen, and their friend Kyle, where they discuss all things nerd culture and theology.

Anne Laure Djaballah (here is her website) is a contemporary artist living and working in Montreal, Canada.  Much of her work might be described…